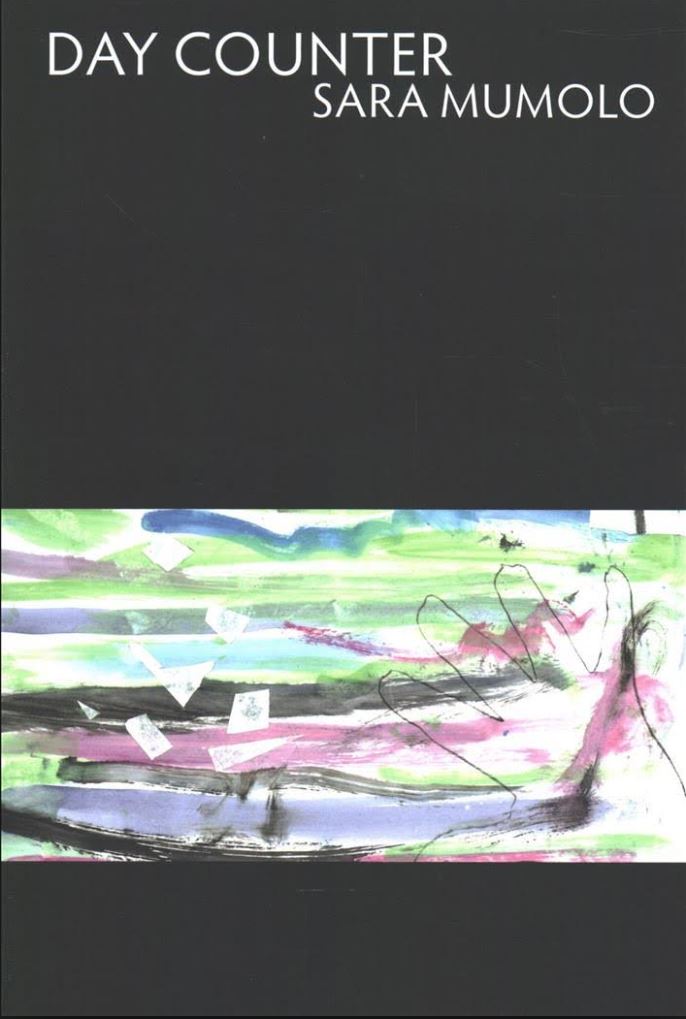 Motherhood: An Erasure of the Self?

A Review of “Day Counter, by Sara Mumolo

It is immediately evident that the primary thrust of Sara Mumolo’s new collection, “Day Counter,” is the manner by which being female, and becoming a mother, entail a sort of erasure of the self. She begins the book with “Just by writing you efface yourself, efface them.” This also brings to mind why the writing is an erasure. Is it that what we say excludes everything that we don’t? She goes on to write “Don’t forget to include the blood, the moon, summon something. Erase. Or don’t, but decide.”

The majority of the collection explores motherhood; the sacrifices a mother must make for her child. My particular perception of these sacrifices for the child (and all associated with him/her) becomes more of a reality than the reality of the self.

There is also the sense of a postpartum depression-like existence, as in the third poem: “10 weeks then 3 months then 26 months: supplying,” she speaks of a redwood tree: “…and you will never again sit under its shade (what color is shade?) and milk.” What interests me regarding the idea of women not being permitted to milk their babies in public is this focus on the “shade” and her inquiring what color it is. Shade darkens things; does the milk elicit also a darkening of something?

In “12 months, 2 weeks, and 3 days: submit,” she writes “As an experiment, try taking the word mother out.” And then moves on in the next poem, “Continuous” to complete the poem with the word “mother” and then several variations associated with the spelling of mother. It brings to mind that without “mothers,” the world would be extinct, lest billions of exceedingly old men [as in something particularly Biblical] roaming the planet. This makes apropos the brief poem that follows: “We are the peons, she whispers in the fluorescent conference room. That is why we need him…” implying that that manner in which women are perceived in the world, (especially as mothers) is entirely contingent upon a patriarchal arrangement of things.

In the poem “While Not Writing,” Mumolo lists all of the daily and pragmatic tasks of “getting things done,” including: “About the building’s management declaring the beams brown cracks normal,” “about the key stuck in the ignition,” and “About the liquid lead pouring from the school faucets.” However, earlier in the poem, she writes, “About erosion. About wine. About not being the family manager. About not being a family economy…” which implies a mother’s concern for her child; meanwhile the desire to escape the situation, which is inevitable. This also implies that mothers often feel the sense of being multifaceted, in that they are all mother in the mind and heart, mother as perceived by the world, and creature that assumes tasks other than those associated with motherhood. Also, in the following poem, she experiments with the pronouns “you, ye, thou, thee, and then you” again. The reader would have to wonder whether the pronouns are traced to a patriarchal construct, or the binary opposition notion of “you” vs. “I.” So where is the “I” in mother?

In “6 months and 3 weeks: pump,” Mumolo writes of the first floor (perhaps in an office building) only having male restrooms, while the women’s restrooms are on the second floor. Just like the “loss” of not being permitted to milk the baby under the redwood, she must locate the appropriate restroom to hide in a stall and pump her milk. Maleness assumes priority, no matter that it is the mother who sustains the life of both boy and girl.

More on the erasure of the self is documented in “9 weeks and 3 days: functioning:” “When a mother arrives at self-negation is that failure?” And earlier in the poem: “I’m not interested in the sarcastic tone of I just never have time for myself anymore, or I need to do something just for me.”

“In “20 months, 2 weeks, and 3 days: owning:” she is again worried about daily tasks and upholding everything for her child. But a poem she meant to write gets “lost.” She writes “Sometimes I search under the seats.” If readers are poets, they would know what the loss of a poem feels like.

In “0 weeks: evacuate,” she writes “Yielding rubs femaleness over the body.” This compels me in the respect that as women we might wear our femaleness, as though it is a role taught to us over time. A basic gender concept, but she problematizes it. The child enters language on page 42, when he or she cries “A LEAF,” and this is where the child becomes a lack of effacement, simply for the facility of language. Does the mother then also become lacking in her effacement? Does language allow us to substantiate ourselves, give ourselves meaning?

With that in mind, the reader must wonder about the first line in “24 months, 3 weeks, and 6 days: swallow:” “You will go out to life wearing your father’s name…” Do women lose some aspect of the child, their own child, whom they carried in their wombs for nine months by their being claimed by the opposite gender?

This collection “Day Counter” seems to follow the days of a mother learning to nurse and nurture her child, while feeling torn by the tasks of daily living, the calamities she must contend with, her sense of being multifaceted and pulled apart. This was extremely compelling to me as a reader, (as I have brought two children into the world), and I think most mothers would identify. That said, I can attest that this collection also would be a fascinating read for anyone concerned with the aforementioned topics, or even just a day “leafing” from cover to cover, under the redwood, which has been lost to so many of us. Highly recommended.

Emily Vogel is poetry editor of Ragazine.CC.  She is the recipient of the Academy of American Poets College Prize, 2008, has been once nominated for a Pushcart, and once nominated for the AWP award in creative non-fiction (2009). She finds solace at home with her husband, the poet and essayist, Joe Weil, their daughter, Clare, and son Gabriel.  email:  You can read more about her here: https://www.ragazine.cc/about-us.