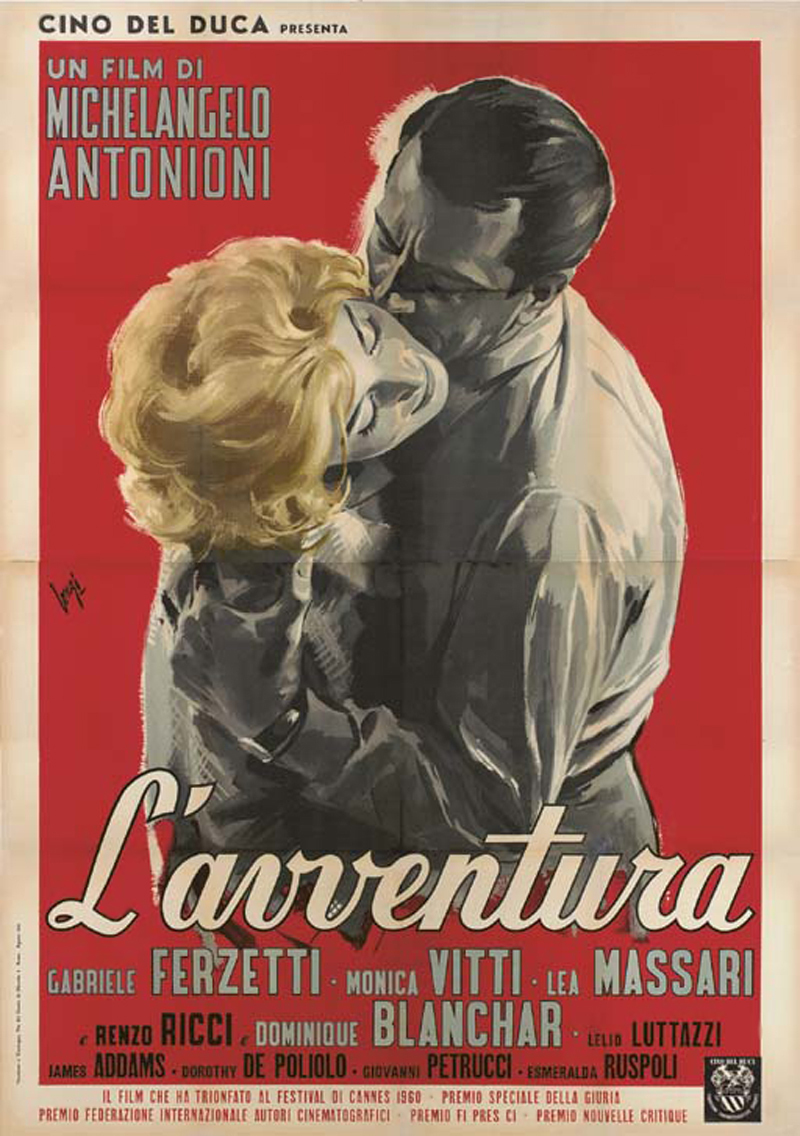 A poem after the Antonioni film L’avventura
by Dwayne Barrick

ANNA
(to her father)
Have you other
truths to tell me?

Hissing surf
through a hollowed
loop of stone.

Disappeared Anna.
A search party.
A hydrofoil.
Tender Is the Night.

Claudia and Sandro
pause to watch
a rustic woman
rib her suiter.

Sandro and Claudia
on the ground
forget how to kiss.

Giggling and pulling
hose up her thigh Claudia
at last loves Sandro.

EXT. OUTSIDE OF CHURCH – DAY

Priests lead their pupils
flush with sun
who catch up Sandro
floating down the line.

Sandro and Claudia.
He on the bench.
She stands behind.
Stone wall and sky.

EXT. TERRACE SOMEWHERE OVER THE PO VALLEY
– A SUNNY MORNING

MICHELANGELO ANTONIONI enters sits and reads the poem
up to this point. He removes his glasses nods his head and sighs.

ANTONIONI
When asked what my films are about I want to say
Ortega y Gasset’s dehumanization of art
was necessarily preludial to the evacuation
of time from characters through increasingly
supra-anthropocentric mise-en-secne.

Who knew they’d overlook my humor?
Even with Moreau coming out of character
when the take was over
my camera rolled as she became Moreau.
Which is valid? Which is violation?
Moreau as Lidia or Lidia as Moreau?
They are both masks. They are one face. Inscrutable.

How dedicated we were then!
For Il Deserto Rosso Carlo Di Palma my cinematographer
had every leaf along a line of trees that would serve
as a distant scrim painted grey but only to be
realized while the sun was somewhat blind
yet on the day of shooting after days of painting
the sun was bright. He cancelled the shot.

ANTONIONI stands and walks to the terrace railing.

Seen from behind ANTONIONI stands before the railing.
He looks out at the vista drenched in sun.

ANTONIONI
The poem is too enthusiastic.
Perhaps it’s the American malady.
Italians have taste. Americans have appetite.
Zabriskie Point almost destroyed my career.
Should never have adventured beyond the Atlantic.
Same with China. Should have kept west of the Urals.
The artist as whore to markets or Marxists.
Opportunists or ingrates.
Only Italy is perfect for all her glorious errors.

Do you see what it takes to be an artist?
Probably not. Few do. There is much to suffer.
I suffer Bergman saying I don’t have technique.
Technique!
Dear Bergman why begrudge your fellow master of his artistry
when our dying the same day gave irony my last word?

My Cannes statement to explain L’avventura?
A mistake.
Ancient codes of morality I wrote.
Decrepit and no longer tenable I opined.
But the old is sometimes something new.
We forgot the old.

My northern rival of Persona thought face to face.
My heroines the Vitti women face the blank of faceless.
My canvas is the world outside the world.
Let it alone. The canvas is always wet.

A boulder rolls down the ravine and plashes.
Claudia prostrate nearby witnesses time falling.
No woman is an island but here.

MONICA VITTI has finished watching a private screening of L’avventura with
Antonioni for the last time. Dark but for the bright blank screen and the projector’s
beam. She speaks from the dark.

VITTI
How often we had spoken of the time they booed.
How we wept! You deserved all the blame.
Your masterwork requires no explanation.
Ha! It made me a star.
A star whose face speaks
earth food pollution.

I was so young then. Michi. Before we departed.
While ever in your light
you memorialized mine.
Though not by birth
I am nobility
and wear it well.
I have done well. I mean well.
Our work together testifies to love
which women know much more about than men.
Hear me Michi.
Our love is still alive
seared onto celluloid.

A women’s love is the best story you ever told.

Others don’t like your askance look.
So many look away when you look.
It’s something you might say is ante-human
while others will say anti-human.
We have heard worse.

Askance at the world.
Remember it was you who called things off.

Michi.
You the adventurer of life to stone. Stone to life.

You are a child of the Po.
I fancy of the House of Este.
Why not?
That would be
that would be
so
fine. 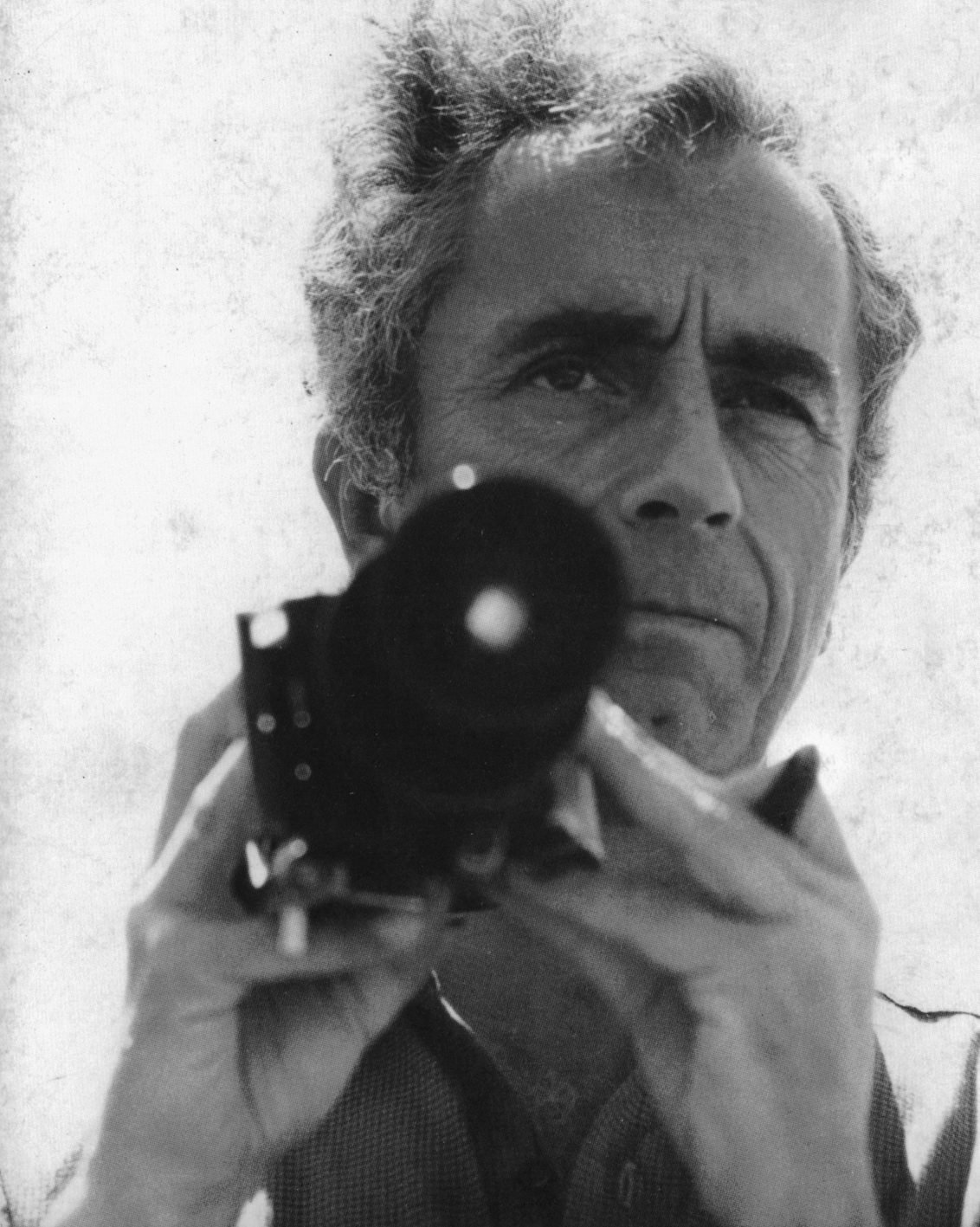 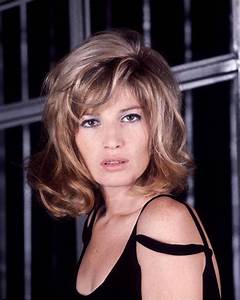 If you haven’t seen “L’avventura,” I suggest you do even if you end up disliking it. A large flat screen is preferable to a small device, if possible. On the 60th anniversary of its release, “L’avventura” remains startling, innovative, visually magnificent, and, for some, controversial.

The film is an extraordinary achievement of “slow cinema.” Not much happens yet there is tension throughout the film. The inner drama of the characters is what you feel, secret and private emotions—the kind poetry can inspire. Here are some recent thoughts on  “slow cinema.”

In this poem, I eschewed almost all punctuation (no commas), relying only on syntax. It is necessary, especially in the first section, to convey the idea of montage, of images that move, as they are remembered in retrospect. In short, the poem is not so much about the film but about how great cinema, like all art, can impact the mind.

See it on Amazon: https://www.amazon.com/LAvventura-English-Subtitled-Gabriele-Ferzetti/dp/B002RA767Q