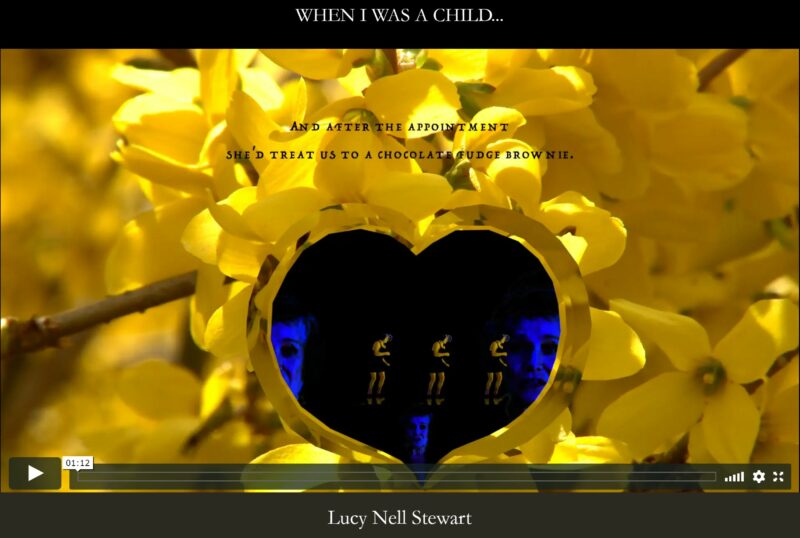 “I find great sustenance in the mother ship and all her elements. Coming from a classical and avant-garde theatre arts background I carry with me the proscenium to composite new worlds with my beloved and always surprising creature friends. As much as I am painting/composing with movements and sounds, the works have a life of their own and I try to stay out of the way”.

Lucy Nell Stewart was born in Northern California in autumn of 1960.

In 1979 through the mid 1980’s she created and performed her own performance art works in New York City as well studied clowning at “If Every Fool”. She headed back to California to for theater and film projects where her first one-woman show emerged in the early 1990’s in Los Angeles.

Back to New York City mid 1990’s to create her second show and her theatrical pursuits led to an interest in filmmaking.

She attended a handful of Super 8 and 16mm classes at Millennium with Ross McLaren and then migrated to video on her own to create these works.

She has been making art her entire life and now resides in Pennsylvania near the Delaware River.

On a personal note:

Late 1970’s to early 1980’s I started playing with video taping myself.
In early 2000s I started making video productions to share with the world.

There is a patriarchy of our species that creates an unpalatable world of hard boiled boxy and destructive straight lines and ideas. They want to mow, gut, strap down, confine , pollute and kill as much life as possible for some idea of profit and then lie about it and everything else.

If I want to be tangled up and jiggly I will be so.

When I ride my mountain bike up the steep hill the gnats like to hover around my eyes so I sing with them. It is always a delight!”

Click here for an interview with Stewart in Ragazine 2017.