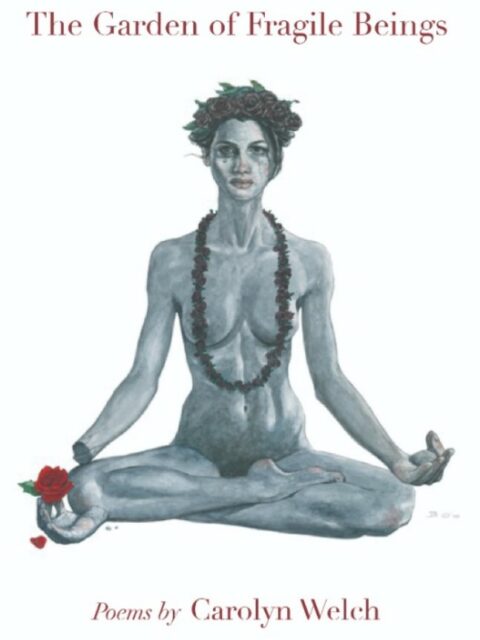 A Way of Blossoming

Carolyn Welch’s first collection of poems, The Garden of Fragile Beings, is the work of a mature writer. Her tropes are fresh and muscular, rich with the bedazzlement of sun after heavy rain, and of the mindfulness that emerges out of moments when loss must be confronted, accepted, and absorbed into our lives.

As a pediatric intensive care nurse for many years, Welch has been schooled again and again in the precariousness of love and tragedy. The opening poem in the collection, “Nurses In Spring,” locates her readers with a brief lyric narrative.

There is a pause and the conversation turns
and we try to name the deaths so far this year.

The windows here are thick, industrial strength
and all we know of the season
is the glare of blue sky
and the silent blooming of pear trees
four stories down

and a few feet farther, the white petals
rain tore free and dropped
a few hours ago.

So begins our journey into the Garden of Fragile Beings; nurses naming their losses, pear blossoms stripped from their branches by rain. Welch’s lines stretch across the page at first. The sound friendships of the long s’s in the first lines give way to the compact short i’s of the second stanza, and become more taut in the third verse, where they are finally abandoned and replaced with the caesural effect of “dropped,” as time takes over from the described pause of the first line.

Moments like these bloom throughout this collection, filled with the mystery, reality, and gratification of losses mirrored everywhere by blooming, ripening world. Trillium mark the end of winter, peonies, ant-filled and petal heavy, nod on their stems in May, zinnias, cosmos, and roses rife with color and scent become haven and project in summer; a place for recovery from that other, clinical space. The flower images counter those moments when recovery fails, bodies fail, medicine fails. Welch’s language for the poems about those losses leans on narrative devoid of speculation, the facts seen from the distance of survivor, caregiver, professional. Even so, we are drawn close, perhaps closer for that missing scrim of sentimentality.

There are other gardens visited in these poems. Some are coming down to ruin: a father dying of lung cancer, a marriage coming apart. Other gardens are just getting their designs, a toddler collecting and discarding stones, ‘tween daughters watching their neighbors go off to prom, a runner reveling in spring rain, laundry folded and stacked neatly on a dining-room table.

At the base of the collection is the knowledge that we cannot escape loss. The heart-wrenching poem, “The Living” breaks down that reality.

The sun flooding in
should be some final dazzling

event. Seeing the boy’s father
weeping over the hospital bed

should be an end. None of us
should go on like we do.

This bit of wonderment echoes throughout the poems in The Garden of Fragile Beings: that we do go on, though we may be like “the mother who/ refuses to mourn until/ there is no alternative.” (January). We emerge on the other side of the moment, bruised and grieving, sometimes bewildered by our own survival, but we do, most of us, emerge.

The poems of loss here are balanced on a fulcrum composed of life’s quotidian moments. A practical mother offers to care for her sick grandchildren to give her daughter a much needed break, Valentine’s Day is spent in bed while “the children treat our bedroom like a train station// coming in when we want them to go/ forgetting their stuff when they leave….,” a woman remembers the silky feel of lake water in August.

The final admonition of “The Living” culls new meaning in the poem “Note to Heart.” Whereas the speaker in the former poem seems to say, “It’s amazing that any of us survives our pain.” the latter poem’s speaker admonishes her heart to get on with living “Give it up” says the voice,

…Let one season wrench away

the next. It’s time to choose sun
heating the right side of the body,
alighting the jar of paper clips in the window sill

rendering the familiar warmth of misery
and this hissing space heater
unessential and annoying.

The clarity with which the speaker presents her case does not ignore the reality of the ‘ache,’ only that there is an equal reality (“None of us/ should go on like we do.”)

if there is a way up and out, a way into blossoming.

“Two Walls Painted” suggests that way of blossoming into the next garden. In its simple, 2 stanzas, we see

The man outside hanging boards on a house,
cigarette loose between his lips,
the sleeping child who has nested himself in a circle of toys
and a woman painting an old room.

It is the second day of spring. Two walls|
have a new layer of Antique White #8904.
It is a lovely simple labor with the breeze now and then
through the open window, touching all of us just the same.

The poems in The Garden of Fragile Beings are poems to read again and again. They are words to reach for in moments of quiet reflection, but also in moments of loss and of joy. “[L]ike the poet// who is no longer afraid of happiness, who/ no longer waits for bad news to click// into place where dread has been” Carolyn Welch reminds us that we do go on; we blossom, bear fruit, and fall fallow by turns. We suffer our losses, hold (some of us) our grudges and heartaches as if they would feed us, we happen upon celebrations of a quotidian nature, unexpected but willing participants.  We go on.

Miriam O’Neal’s poetry, translations, and reviews have appeared in multiple domestic and international journals. She published, We Start with What We’re Given (Kelsay Books) in 2018. A new collection, The Body Dialogues is due from Lily Poetry Review Books in early 2020. She can be reached at