One Night in Las Vegas

Jackson and I pushed our way through the crowded casino to the table where Marcos dealt blackjack.  We stood among the spectators, watching as his deck diminished.  When a dozen or so cards remained, he scooped up the discards and began to shuffle.

Jackson edged forward and gave the sign.  Marcos’ sharp eyes caught the movement.  Jackson held up two fingers and tilted his head toward me.  Marcos nodded in response and from his vest pocket drew two green tokens.  Jackson stepped closer and accepted the tokens.  Marcos gestured toward the bar and mouthed the name “Frankie.”  Jackson backed away, pulling me with him.

I examined my token.  It resembled a typical gambling chip except for a large “2” on both sides.  Jackson pocketed his.  I did the same with mine.

Saturday night brought in an amazing variety of patrons.  Tourists overwhelmingly dominated the floor, but boozers and cruisers mingled as well, along with a few serious gamblers.  A red-headed woman, wearing a tight, electric blue dress, screamed as we passed the craps table.  Was it a cry of pleasure or despair?  I couldn’t tell.  We made our way to the bar, and Jackson motioned to the tall, slender bartender.

The bartender shifted his gaze toward the other end of the bar where a muscular man with a handlebar moustache served margaritas to a pair of giggling, young women.  After a few moments he escaped their exuberance, and the tall bartender whispered to him.  Frankie gave us a long stare before approaching.

Jackson slid his token onto the counter.  I followed suit.  Frankie examined the tokens before depositing them in a small jar by the cash register where four others already resided.

Jackson gave me a nudge.  “Looks like we’ll have company for dinner,”

Frankie leaned over the counter and in a low voice said simply, “Midnight.”

I checked my watch.  “We’ve got a couple of hours to kill.  What do you want to do?”

“Don’t drink,” Jackson advised.  “It’ll spoil everything, and we can’t afford to gamble away our fee.”  Jackson patted the breast pocket of his jacket and surveyed the room with a scowl.  “These tourists come seeking some sort of unique adventure.”  He made no effort to hide the disdain in his voice.  “But they all have the same experience, really.  They drink too much, lose a little money, and go home.  They tell their friends and relatives how much fun they had.  The kicker is most will come back and do it again.”

“We’re different.”  I looked to Jackson for validation.  “Our experience will be unique.”

He frowned and glanced away.  “A rare experience perhaps, though not unique.  There are no more unique experiences.  Rare is the best you can hope for.”

I felt let down.  Jackson’s sudden, matter-of-fact pessimism took some of the luster off our quest.  After all, it was he who first proposed the idea.  He talked it up and made a big deal over the lengths we had to go to.  His contagious energy swept me up at the outset.  Now with the end in sight, his mood seemed to be souring.  Had the journey become more important than the goal?  Considering the time and money invested, his lackluster attitude in the final hours puzzled me.

I wandered off and spent my time observing casino patrons at slot machines mechanically pressing the spin button, boredom etched on their faces.  Almost no one bothered to use the lever though it still adorned most of the machines.  Shortly before twelve, I strolled back to the bar.  Jackson waited there with Frankie and a well-dressed, elderly couple.

At the stroke of midnight, we were joined by a middle-aged man and an attractive woman in her early twenties.  The young woman with her big hair, short skirt, and low-cut blouse jingled with bling as she walked.  Her short, stocky companion, dressed in a rumpled suit, chomped absentmindedly on an unlit cigar.  The pair were a Vegas cliché, right out of the movies.

The seven of us trooped through the lobby and down a hallway next to the restrooms.  Frankie left us in a room not much bigger than an elevator.  In the uncomfortable closeness I stared at the floor.  When I raised my head to speak, Jackson shook his head.  A long, fifteen minutes later Frankie reappeared.  The elderly man handed an envelope to him.  Jackson and the other man did the same.  Frankie slipped them unopened into his pocket.

We passed through a series of utility corridors until we stood before a royal-blue door.  Frankie produced a key and let us in.  A table and six chairs occupied the center of the otherwise bare room.  Each place was set with a plate, silverware, napkins, and a glass of water.

As soon as we took our seats, the door at the far end opened, and a waiter entered, balancing six covered dishes on a large tray.  He placed them before us and withdrew.  A few anxious moments passed before Jackson removed his cover.

The shell-less, roasted turtle steamed with aromatic spices and swam in a pale brown sauce.  The creature had two heads.  The sight, though expected, repelled me.  After taking a deep breath, I summoned the strength to uncover my dish.  Mine also had two heads, but surprisingly, it had three front legs.  The others revealed their plates, but I couldn’t bring myself to look.

Next to me, Jackson calmly sliced off a piece, took a tentative bite, and then proceeded to consume his entire portion in short order.  The man with the cigar, sitting across from me, took a small bite and began to gag.  He coughed into his napkin, pushed back his chair, and hurried from the room.  His girlfriend gave a shrug and resumed dining.  The elderly couple ate slowly, savoring every bite.

I cut a piece and forced myself to swallow it.  With the significant cost weighing on my mind, I had another, chasing it with a big gulp of water.  Closing my eyes, I gave up and struggled to banish the image from my mind while anxiously waiting for the others to conclude their meals.  It took the elderly couple twenty minutes.  Finally, they laid down their utensils.

We sat without speaking until Frankie reappeared and led us back to the casino floor.  The elderly couple immediately sought out the craps table.  When the young woman’s companion didn’t show, Jackson moved in and struck up a conversation.  I hoped he knew what he was doing.  She looked like a hooker to me, but in Vegas it’s difficult to be certain.

I headed straight for the bar, ordered a double whiskey, and downed it.  For a few minutes I simmered with anger, first at Jackson and then at myself, for being caught up in his crazy, frivolous quest.  After a second round, my resentment eased.  We came for an unusual experience, and we found it though the extravagant cost rankled me.

I had started on my third whiskey when Jackson appeared and clapped me on the shoulder.  He slapped a slip of paper down on the bar in front of me and winked.  I saw a phone number etched in purple ink before he picked it up and slipped it into his pocket.  Sliding onto the stool beside me, he ordered a drink.  He remained silent until it arrived and had taken his first sip.

“Siamese twin turtle… or conjoined, I suppose, is the politically correct term.  How many people can boast of a dinner like that?  Very few I’ll wager, but you can’t tell anyone.  The animal rights groups will raise hell if they get wind of it.  That’ll end it for everyone.”

Our mission fulfilled, Jackson’s enthusiasm resurfaced.  He expounded on the subtle taste, tender texture, and superb seasoning, though clearly what he really relished was the taboo nature of the adventure.  I found the whole affair unsettling, yet I can’t say the turtle tasted bad, kind of like chicken, I guess. 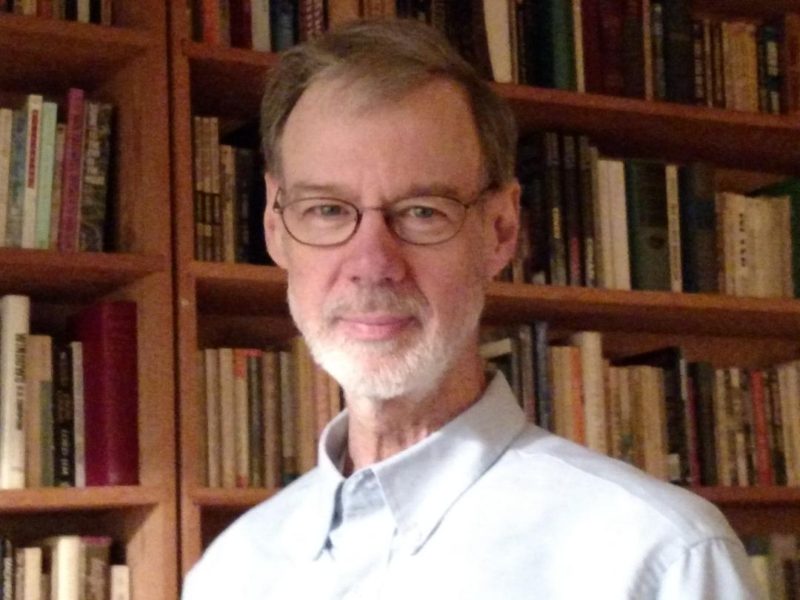 Ken Wetherington grew up and lives in Durham, North Carolina with his wife and two dogs.  He attended Western Carolina University and has spent his working life in libraries at Duke University and University of North Carolina at Chapel Hill.  His reading tastes run the gamut from literary classics to pulp novels and comics. He feels there is much to learn from all types of fiction.  His stories have appeared in Ginosko Literary Journal and The Fable Online.  When he is not writing, he is an avid film buff and teaches film courses for the OLLI program at Duke University.  He may be reached thorough his web site: https://kenwetherington2016.wordpress.com/