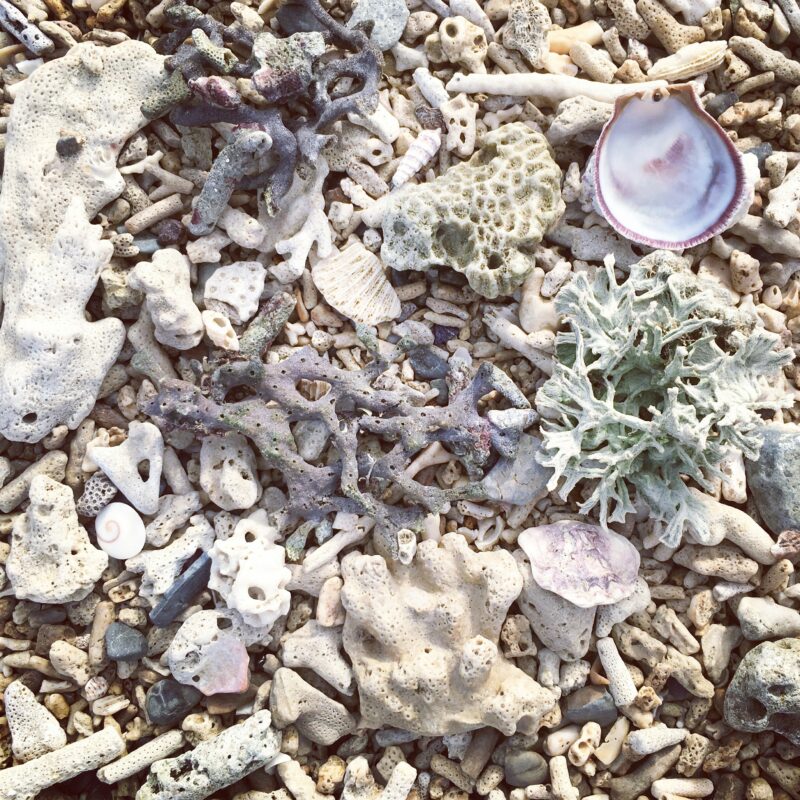 Photo by Catrin Johnson on Unsplash

We of course desire their kisses, we cry out for them in dreams, try to grab up the mists before they fade. Sheet hems and ant trails in the dirt, the invisible carving the landscape. We nod where they tread, where they stomped our elephant hearts.

The low-down voice of my daddy’s last breath, how his eyes googled under their lids, threatening to snap open, but his heart not in it and his hands in a position the nurses thought placid. He never set his hands like that, ever, even when he was true sleeping, as he did on the grey couch with the swirls in a bas relief, him laid out like a mummy after church on Sunday.

His collection of shells was pure, as hard edged and clean as when Daddy first bent to pluck them. They rattled in his swim suit’s pockets, dispensing sand, little cement mixers among a prized pincer, a Bic lighter and his plastic square from Walgreens that protected his cigarettes. He named them with pet names, logical first-to-rise descriptions; no genius about classification. Bear Claw, Horny, Clam Shell, Bullet. What was a Nautilus? Who knows or cares? The collecting was all—shells, coins, stamps, pens. If one was worth millions he wouldn’t know; further education or hoarding or selling not the point. Only the gathering, the drawing to his curly sunburnt chest.

The spirits leave hungry. Would that we could press a hand so they’d tarry, tug a sleeve, make them stay. Cannot even dream them too visibly lest they gossamer out of sight. O Mother, dear Daddy. The jewels you never could afford ring around your necks now. You are adorned with our leaky, filmy love; careful you don’t stray from shade. The sun will evaporate you; the light will make you incandescent and then, my God, nothing. Bring the incense around. Let us try conjuring again.

Sheet-scrubbed laundry hung out back fast and long and high as a ship’s sails. We ran through slapping, wounded birds flying in and out the windows, plastering our grimy hands on wet sheets trying their best to shine. We screamed, we laughed, we shimmied up the laundry pole. When she found us she slapped us.

With the children off to school, the house is a bug’s empty shell, with the bug gone off to find new skin. Wrist bones and ankles poke out. Mother, darn us our socks, knit us fringe on a cold hat, sew up the patches at our knees. The quilt, those ripped squares re-enlivened, put it on our exposed parts, tuck us in, make us decent again, make us yours.

Daddy’s kidneys had to be watched. He’d beat bladder cancer. He was borderline diabetic, with undiagnosed emphysema. He smoked from his teens to the very day. The disease was fast acting, they said it was acute. We didn’t know leukemia had subcategories.

When I crossed to his hospital bed he looked up, face full of candor, and said, “They tell me I’m not long for this world.” His voice split on “world,” and his eyes leaked so he blinked and blinked and blinked. I took his hand and rubbed his shoulder, did my blinking. “I know, Dad.”

“He said, I guess you’re all gonna hafta take care of yourselves now because I’m outta here.”

He watched old black and white movies and the televised Reds games. We mouthed stupid stuff over cutting the lawn and my cat acting sick. I held his hand a lot. I told him he’d been a good dad. When the hospice rep itemized their whole admission and care procedure, over-stating everything, making it all more complicated and repetitive than needed, I ached for my daddy’s fluttering eyes.

He rarely suffered fools. He’d call you out over a string hanging from the hem of your dress, or if your jeans fit too tight; driving recklessly over potholes (you’re gonna ruin the alignment!), or coming back home to live with your babies when an alcoholic spouse wandered. (You tell him to come talk to me!)

Hospital and Hospice were the small rest of his life, but for us, his family, the blood receded like any old folderol, our feet tying us to the earth we put him in and our hands lifting like balloons so we could pray over losing our sense of direction, our sense of decorum, our good sense.

In his last days – and he was well aware they were – he spoke only of the surface world: baseball game fiascos; his appetite or lack; the length and cleanliness of his hair; a good shave. If he’d arrived at some final wisdom, he didn’t share it. He didn’t broach the fact of his ending, so neither did we, none of us courageous. He never spared us his judgment; he’d say we fumbled the ball.

Along either side of his body his arms lay parallel, a way he never lay alive. Were he with us, were he breathing, his hands would be holding, four fingers and their nails latched into one palm whose hand’s four fingers and nails clicked the other palm. How he latched on to himself.

I put a cake in the oven and when the timer went off I checked on the done-ness. I crouched to get toothpicks from the bottom cabinet and I flinched when the idea to call Daddy and tell him I’d baked flew through. His ghost like a bird in my kitchen, the old absurdity, the damned unplanned for, the shock-thought to call him a week, today, or two years ago. I pull on the dusty garden gloves he gave me, a size too big inside where my hands and fingers swim and fight to grip the skinny stems of weeds. His memory pinches in the way backyard chairs catch my thighs in their metal hinges when I jump-flee, startled by hornets. Loss of him buzz-sawing me, making me dance and duck like an idiot. What’re you fiddling around like you’re on fire for?

Donna Vitucci’s work has appeared in print and online since 1990. Her most recent novel, ALL SOULS, is published by Magic Masterminds Press. After years living in the Midwest, she now makes a home in North Carolina, enjoying nearby grandsons and an extended growing season. Part of her memoir-in-progress appeared in RAGAZINE in 2016. “Telling this story is taking forever, is life-long.”