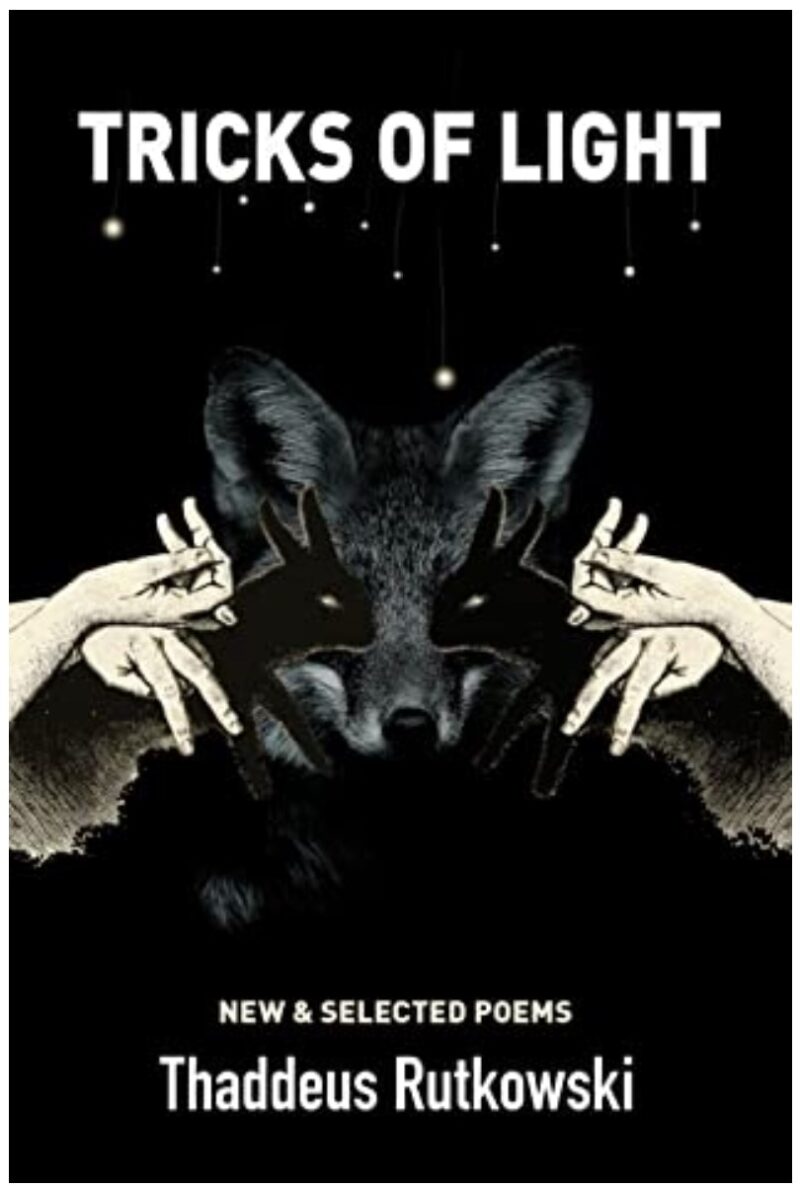 Readers know from poems in Thad Rutkowski’s delightful new book Tricks of Light: New and Selected Poems that (if we identify him with the poem’s speaking voice) he is the father of a quirky, independent young adult daughter, goes to work and has a very competent wife who, for one thing, is better at holding chickens than he is. He describes, “When I hold the bird … It opens its beak as if it might peck,” whereas, he goes on, “when I hand the bird to my wife .. the bird becomes calm.” That said, in most of the poems in the book, the author is on his own: riding his bike, sitting alone observing the family turtle, walking alone and noting a street scene. And what defines these poems of solitude is that there is something missing, either something is left unfinished or  not comprehended.

In one example, the turtle is scratching his head. The poem begins, “I know why our turtle scratches its legs ….  But I don’t understand // why she scratches her head.” He puzzles over its peculiar, repeated motion. Another time he gets a flat on his bicycle and has to wheel it to Excelsior Bike Repair. When he gets there, “it is closed. // I don’t know why it would be closed // on a Thursday afternoon.”  In both cases, the author confronts an unfathomable if trivial situation without enough information to make sense out of it.

In other cases, he finds himself facing actions that reach no satisfying climax. He is crossing a bridge, “At the railing next to the river, // a man pulls his line in from the choppy, brown water.” So far nothing has happened. “I watch for a few minutes, // waiting to see what’s on the line … but the end of the line …never appears.”

Describing his terse lyrics this way might suggest they are rather ephemeral, but I’ve left out that they usually arrive at a witty or thoughtful flourish. After watching the turtle scratching its head, the author notes, that maybe she is

… trying to figure out

the answers to difficult questions,

such as where she came from,

why she is here, and where she is going?

Those questions, for a turtle, are hard to answer

Moreover, there is a sort of measured austerity to his verse. He describes a momentary situation without bringing in “baggage” from the past or future, memories or hopes. Compare his writing to the verse of Salvatore Quasimodo, for example, using a poet who also commonly depicts a lone observer. In “La dolce colina,” the poet is watching the river. He notes (in Allan Mandelbaum’s translation), “Birds far-off and open in the evening // tremble on the river.”  This musing on nature quickly leads to thoughts of a dead love. “The light green // of your dress is here among the plants.” Rutkowski consciously avoids such connections, leading to plainer, purposely less resonant descriptions.

The themes I have mentioned hint that the poet is making metaphysical points. Maybe he is saying: “Life is indecipherable” or “We can never know the real motivations of people (or pets).” However, I think it would be better to see his ideas sociologically. The lack of closure and inability to understand why things happen as they do lead us back to his tracing of a society of arbitrary control and anonymous aggression. At his job, the poet mentions, “A man gets angry  at me for leaving work early, // so I explain I’m going to another job, // but he doesn’t accept that excuse.”    Why “the man” – he is never designated as a boss – has such power over the speaker or even why he wants the poet to stay, although the poet speculates about this, remain unanswered questions. In another instance of unfathomed aggression, the hero is on the street. “While riding on my bicycle, // I feel something hit the side of my head.”  Someone has pelted him but who?  “I looked back at two riders who have passed. // Neither one is looking at me and swearing.”

Now we see the importance of the book. In the course of penning these sly vignettes, Rutkowski has offered an unsettling look at contemporary life where, even as the Internet and other features, it is claimed, will educate and connect us,  so much that happens in everyday life is inexplicable and inconclusive.

Professor Jim Feast has reviewed for the Brooklyn Rail, Evergreen Review, American Book Review and other publications. He is author of two novels published by Autonomedia and one poetry book from Fly By Night.