The Caduceus & the Rhea Sisters 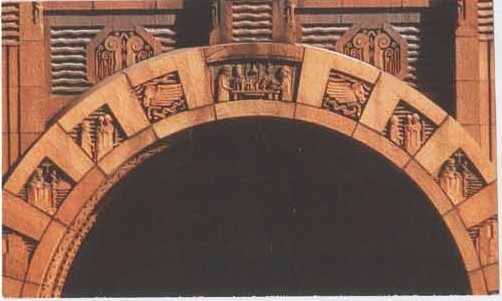 In 1928-1929 a Medical-Dental Building was constructed at the corner of Georgia and Hornby Streets in Vancouver. It featured statues of three tall nurses, made of terra- cotta, {fired and glazed clay), and wearing nursing uniforms of World War 1. The three sisters stayed in place, guarding the city against evil spirits of disease, until they were removed in 1989, just before the building was demolished by dynamite. They were taken apart and hauled away, then stored at the Vancouver Museum possibly awaiting re-assembly and a new life in the city.

Other ornaments from the building, terra-cotta panels at the entry archway, were also removed, and are now displayed in The Canadian Craft and Design Museum, at 639 Hornby Street, adjacent to the original location of the Medical-Dental Building. They portray a surprising variety of ancient and modern symbols related to health care. There are paired panels showing;

…. a winged horse, above a shaft with a serpent;

…. a preacher, under a cross, beside another shaft and serpent;

…    a scholar in a library, under a female statue holding a staff and serpent;

…   a keystone panel, top-center of the arch, showing a medical laboratory.

The symbolic prescription was clear – when illness strikes, call on superstition, magic, religion, science, and medicine – in doses as required. 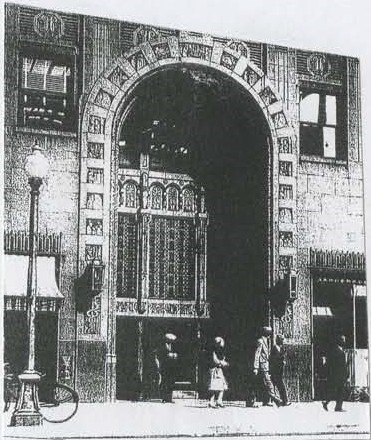 At the bottom of the arched entryway, at eye level on each side of the main doorway, there were two large terra-cotta panels portraying the caduceus, two snakes on a shaft, sometimes said to be the symbol of the medical profession. There appears to be some confusion. Some say the symbol of medicine is a walking stick, with a single twining serpent, called a kerykeion. It is clearly shown by the low relief sculpture of Hippocrates, in painted concrete, on a building at Burrard and 10th Avenue, in Vancouver. Now the offices of the B.C. College of Physicians and Surgeons, I think that building was originally known as the Academy of Medicine. Other samples can be seen in various locations, including possibly the largest existing kerykeion, on The Fort Royal Centre, in Victoria.

When I wrote to the Canadian Medical Association about this problem, I was advised that the single serpent on a walking stick is the acknowledged symbol of Hippocrates, of Asklepios, (Aesculapius), before him, and of medicine. The Association also provided me with several articles; from the CMA Journal, October 1961 and September 1973; The Canadian Doctor, December 1978; The Massachusetts Physician, November 1968; and The Journal of the American Medical Association, April, 1985. The articles agreed that the caduceus, a winged shaft with two twining snakes, and sometimes with wings, was a wand of Hermes, which he used for protection as he guided the souls of the dead through Hades.

The JAMA article particularly, by Dr. Robert Rakel, also notes Hermes’ roles as God of Commerce, and as protector of thieves and outlaws, connections which medicine “may well wish to avoid”….. According to The Massachusetts Physician, use of the caduceus by medical organizations is “… blatantly inappropriate”, and “… downright insulting”. 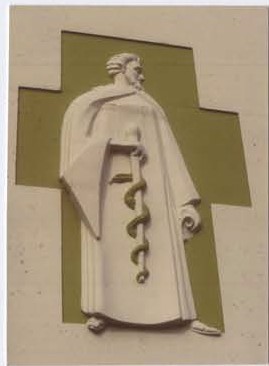 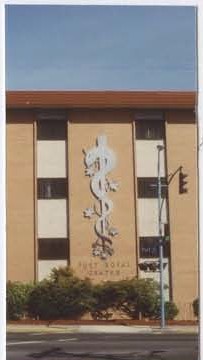 By this time my curiosity was very high, and I consulted Tripp’s Meridian Handbook of Classical Mythology, which verifies the medicalarticles cited. The caduceus, a shaft with wings and two twining snakes, is the symbol and the magic wand of Hermes, not of Hippocrates, or of Asklepios. Hermes’ caduceus, cast in metal or carved in stone, is well known on early bank buildings in Vancouver where his influence as God of Commerce is appropriate. 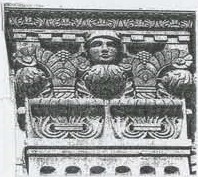 Hermes on a Royal Bank 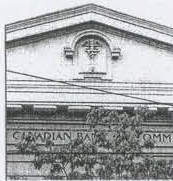 A Canadian Bank of Commerce

I was now tiring, but still wondering why the serpent is so prominent in symbols of medicine and commerce, and why it appeared so often on the Medical Dental Building. It seemed strange that fearful serpents should be placed as ornaments at the entry to a building wherein we expect to find healing and eventual comfort. I found that the snake was sacred to Apollo, and because it signified wisdom, fertility, learning, longevity, arid restoration of health, it seems most appropriate to medicine. Then I went too far ;  in a few chapters on ancient medicine, there were three intriguing surprises;

1 – In ancient Greece, at healing temples of Asklepios, feverish patients rested on shaded, breezy porches, with large, cool­ bodied serpents coiled close beside them. At that time, when epilepsy was known as “the falling sickness”, it was believed ‘that an epileptic patient could be cured by snatching the skin from a live snake. Temple staff were said to feed biscuits to serpents, to keep them nearby.

2 – In ancient Rome, according to Aelian, or Pliny, snake bite could be cured by;

…. drinking a mixture of she-goats urine and vinegar;
…. eating a concoction of she-goats dung, boiled in wine;
…. by swallowing the testicles of a hippopotamus under water.

At this point curiosity vanished, and I reminded my doctor of my continued trust in western scientific medical practice.

P.S.     Joan McCarter, daughter of J. Y. McCarter, architect of the Medical – Dental Building, once told me that when the medical and dental staff occupied the building in 1928, and began their work, they privately nick­named the nurses “The Rhea Sisters”, “Pia”, “Dia”, and  “Gonna”. The nurses and ornamental terra-cotta on this building were fabricated by Gladding, McBean of Lincoln, California. The original three sisters have survived their most recent ordeal. They have been refinished, and have found a new home on the Technology Enterprise Facility III Building, at 6190 Agronomy Road, at the University of British Columbia.

P.P.S. On October 7th, 2005, The Vancouver Sun published a photograph of the marble-faced clock previously mounted above the elevator doors on the lobby wall of the Medical Dental Building. Hugh Bulmer, of Maynards Fine Art Auctioneers, was quoted, saying: “…  it is a shame that such buildings have to be lost. Pieces from the old Medical-Dental centre are dotted around the city and can only give us a glimpse of the interesting design of that building”. The variegated orange marble clock face is 36 inches in diameter and the hands are elegant Art Deco metal work. The clock still works, and its value in 2005 was estimated between five and ten thousand dollars. 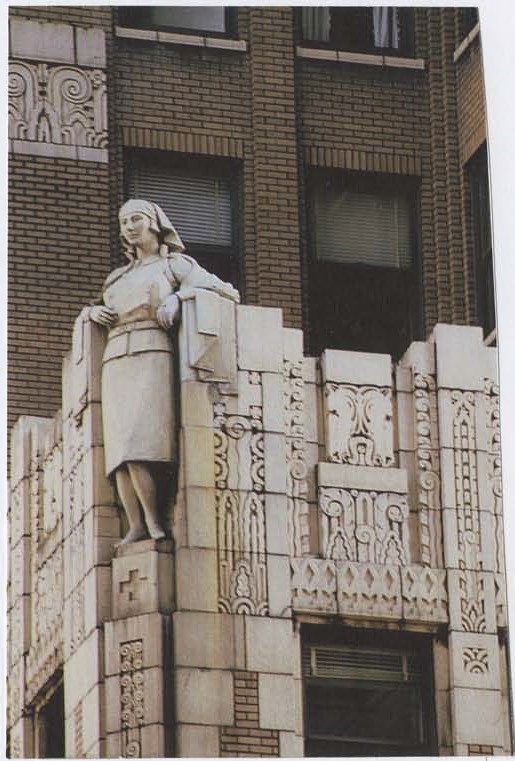 One of the Rhea sisters.

Credit for the 1988 – 1989 Campaign to Save the Medical Dental Building goes to Vancouver’s Community Arts Council, and to Frank Rutter, Editor of the Vancouver Sun, for his generous support of the cause. Through the spring and summer of 1988, the Sun published many letters to the editor, the majority opposing demolition of the Art Deco building. On Sunday morning, May 28th 1989. 30,000 spectators watched as the building came down. Rooms in the Vancouver Hotel were jammed with people looking on from front row windows. Travis Latham, age 6, sat on his father’s shoulders, and said “Daddy, are we going to blow up part of our world?” 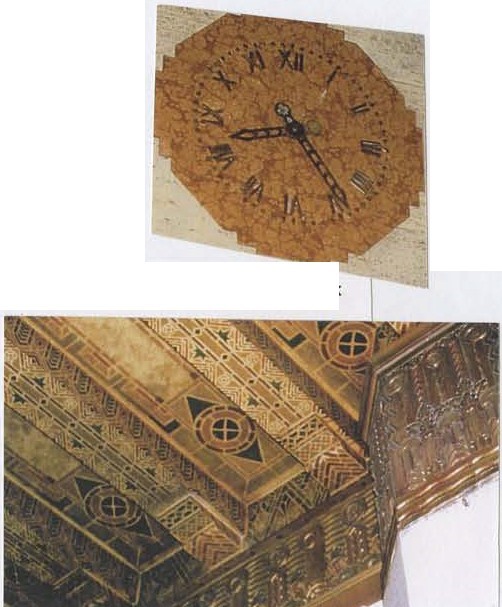 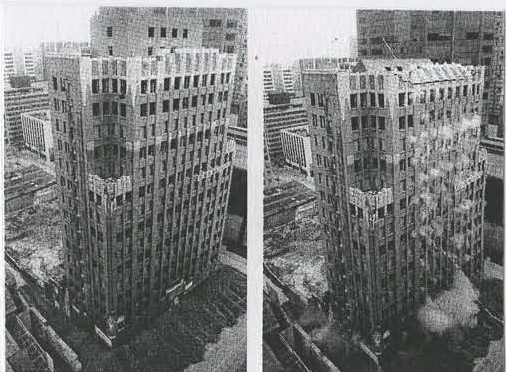 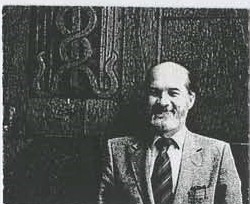 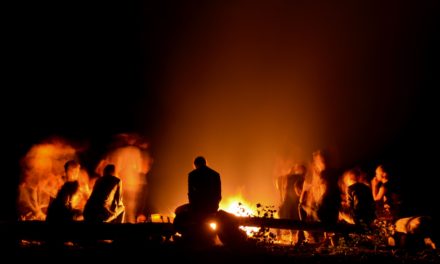