Barbara-Rosenthal - A Crack in the Sidewalk, Columns, FEATURE | 0 |

The Production of Meaning in Art Fabrication:

What Are You Doing? Do You Know? When? Before or After?

— NYC, March 1, 2018. Which comes first? It’s not the same for every artist. And maybe it isn’t the same for every piece. The “message” of a work of art, and the fabrication/construction/creation/manifestation of that message. The meaning and its object/icon/image/word/conveyance. We start here with the premise that art has meaning. (Perhaps we can explore the premise itself, but in a future essay.) So if an artwork has meaning, it was instigated by the artist. (I’ll get to the part that viewers and others play, too, some other time.) So how does the artist plant meaning? I think there are two ways:

Or 2. The Surreal Method. An artist might venture down an unfamiliar path, communicating with only their raw materials (loosely defined), the evolving process and the evolving artwork itself. The goal of such artists is to impart a certain mystical sensation only upon themselves, but which they hope to also be universal. This artist is only peripherally interested in their work’s meaning, although usually accepting (and often even certain) that there is one.

Several years ago I tried to find a neurologist who might have some data about different parts of the brain involved with these different methods of production,“The Statement” vs “The Surreal.” No luck so far, but if you know of anyone, please send them my way.

Of these two programs for artmaking, “The Statement” is a far easier plan, and in the hands of simpletons, substitutes for a superficial essay in which an oft-referenced cultural message, or optically technical physiological message, or straightforward conceptual message is imparted. Such art perfectly (circularly) illustrates itself for “Artist’s Statements.” (I set out to do that and I did it.) Artist’s Statements are a torture to artists of #2, “The Surreal.” Often such artists don’t even want to get too close to knowing their own messages, lest they oversimplify them, narrow their own scope, back themselves into a corner, be expected to be overly consistent, have no room to explore.

I’ve been thinking about these things lately again because my 1991 quadratic Conceptual Photoworks piece, Starfish/Fossil/Twins, last shown in 1994, is on exhibit through March 25 at the Haber Space on the Lower East Side, and a series of current Conceptual Photoworks will be concurrently shown a few blocks east along Delancey at Mitchell Algus Gallery. These are all from among my “silent” works, i.e., they are not image/text nor image/sound nor image/performance. Specific to these pieces, a young filmmaker been coming to my studio at eMediaLoft.org working on a biopic, and asking me about my “practice.” What does this piece mean? What do you think it means? Did you set out to make it mean that? How do you think viewers might interpret it? Do you think all art even can be interpreted?

For what it’s worth, then, this is what my practice seems to be:

Singular or aggregate moments of completely surreal, subconscious eruption of inspiration “Plurp” into a visualization of the form, content and media of an entirely finished piece (the “Sacred Image”) and/or of at least the first action/task. This is usually due to material and/or experience of the moment, often involving my past pieces or relevant past iconography.

As tasks proceed technically toward that “Sacred Image,” there is interaction between the product (the Artwork) and me (the Artist), as if both are in “Independently Hovering States.” This causes a visualization of a “Further Developed Sacred Image,” and/or a further manipulation of the material, and on to further tasks.

When further images and/or tasks cease demanding action, this “Furthest Developed Sacred Image” gets finalized (editioned, cleaned up, whatever) and released as High Art.

The work feels free to demand revision, revisitation, cannibalization, or consignment to a drawer, any time. None of its materials are ever discarded.

I had some steps here about the fallout afterward, particularly about exhibition processes and responses to responses, but I’ll save that for another time. And I have more thoughts saved up about the #1 category, “The Statement,” particularly about the divisions “Sociological/Political,” “Optical/Abstract,” “Classical Conceptual.” For one thing, where did the Impressionists fall?

See you all back here for Ragazine’s May-June issue!

Barbara Rosenthal is an idiosyncratic New York artist/writer/performer whose latest book, the novel, Wish for Amnesia (Deadly Chaps Press, 2017) explores themes of innocence, esthetics, dimensionality, thought and corruption. She is particularly interested in the intersection of art and life. About the novel: wishforamnesia.com. Calendar of events: http://www.emedialoft.org/artistspages/frameEleven.htm. To comment on this column, please message FACEBOOK: https://www.facebook.barbara.rosenthal1.com. 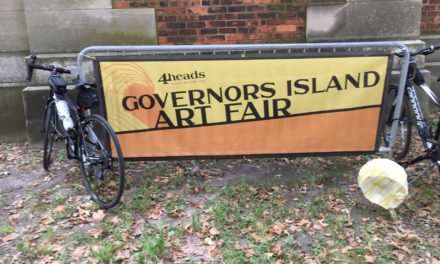