I was in Maine, getting ready to make my annual late September trek, and head to Florida for six months. There were boxes and stacks of stuff to be packed and loaded into my van to head south with me scattered around my cottage. The phone rang. It was my chum, Scooter, calling from the West Coast of Florida. ”Hey, Bill!” he sang out. My right eyebrow elevated a quarter inch, and I drew in a deep breath. My face felt flushed.

Scooter is a damn good musician and guitar and amplifier tech, and knows my many weaknesses at least as well as I do. My weaknesses, in reality, amount to something closely akin to addictions. I love old guitars, especially the ones in rough condition, and old, non-functional, tube-type guitar amplifiers, in even worse condition. You see, I used to play folk music in saloons around the campus area of Ohio State, when I was a kid, back in the ’60s. Back then, I played acoustic guitar music, and sang, as was the fashion of the time. That was, to some degree at least, also due to the fact that neither my roomie and co-conspirator, Bob Hammond, nor I, could have imagined ever being able to afford an electric guitar, OR an amplifier through which it could have been played. We couldn’t even afford a decent acoustic guitar, and you could buy a really nice, used Gibson J-45 then for about a hundred bucks. That was also equal to two months’ rent on our squalid, utilities-furnished, shared-bath apartment. We spent the ’60s “tapped,” as they used to say. We played Campus-area bars for five bucks a night, each, plus all the beer we could drink. Luckily, we could drink a hell of a lot of beer. There were also co-eds available from time to time, and we felt wealthy, adding up the sum total of our incomes. But, I digress…..

Scooter had something in mind. He knew I’d be back in Florida within a couple or three weeks, as usual, and he had come up with something to tempt me! And, as we both knew, I would accept those temptations, and reach for my right rear pocket, on arrival. It was not an outcome that would ever be in question. “What’s up?”, I asked, knowing that what was up was the kind of stuff that I would be helpless to decline owning, but just what kind of stuff? That was the real question. As this suspicion took form, my fear/hope approach to this kind of telephone call kicked in: Scooter started his pitch. 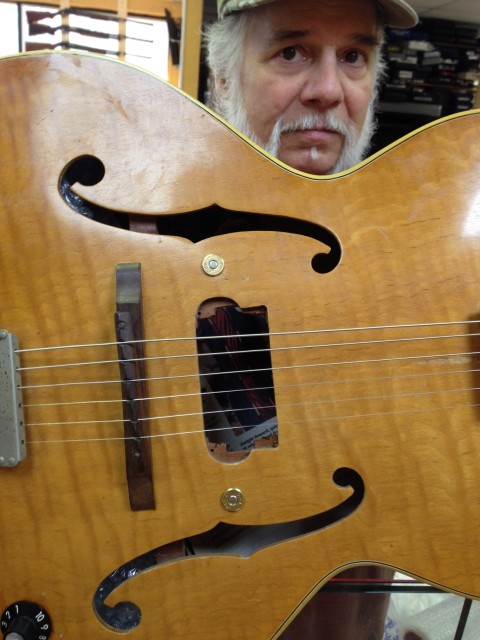 The man and his machine

“A guy I know bought a whole batch of guitars and stuff out of an estate”, he began. “He sold all the decent stuff, but there’s a lot of kind of crappy stuff left over that’s right up your alley.” “Like what?” I mumbled, already lost in happy speculation. “Oh, old junkers; amps with blown speakers; old, ratty, non-functional, hollow-body guitars with missing parts: you know.” Indeed I did know. They were items that would have been abandoned by anyone with good sense, normal people who recognized that loads of labor and non-original, aftermarket parts would be required to make those instruments playable at all, and that they would have little monetary value after they were repaired, weeks, months and money down the road.

He gave me a list of them. He sent me photos of them by email. He knew that I would take them all, and so did I. I was helpless. “I’ll have to look at them first”, I said. We both knew exactly how that would work out, and that’s how it did work out. I arrived at his shop in Florida about ten days later, and looked, and then we figured out a “take-‘em-all price” that would work for his seller, and we started ordering the required parts to make them work again. My billfold began to take up less space in the right hip pocket of my Levis, almost at once.

I know how drug addicts feel. They know it’s never going to be a good outcome, and simultaneously, they know you know they’re going to do the deed. Still, it was a “rush” for me. I pointed out the stuff I wanted done first. There was a 1960s’ Fender amp, with a bad speaker, bad tubes and capacitors, holes in the grill cloth, and numerous wiring problems. There was also an old hollow-body Epiphone jazz guitar, with almost all the original parts missing. It had lost its original case, too, and was wearing a trash bag. “These two”, I said, and pointed. It was like adopting the two ugliest, needy and battered dogs at the animal shelter. I couldn’t have said no to either one of them. Scooter started paging through his parts catalogs, and while he added up the things we needed, I picked up and handled each of my new adoptees. I was sunk, and Scooter would soon be able to reclaim the storage room that had contained the romantic debris that I had just acquired. We were both happy people.

Everyone develops a system of rationalizing their more aberrant behavioral issues, I suppose, and I have developed mine. I don’t watch much television. (Here comes the rationalization)….In Maine, I don’t have any means of doing so: no cable, no antenna, and absolutely no interest in turning on the tube even if I had the means to do so. Accordingly, for nearly six months out of the year, I don’t watch any TV at all − as in none! When I get to Florida, my condo has cable included in my monthly homeowner fees, so if I want to look at the weather forecasts, or a college football game, I can do so. I usually don’t do so. I read, I write, and I chase guitars. I go for walks and day-trips or road-trips. I fiddle around with guitars. While arthritis has limited my always-limited guitar-playing skills late and soon, it hasn’t limited my thirst for the next potentially cool, beat-up guitar that comes along. The implication is that by not watching TV, which I see as a tragic waste of time, I can justify buying guitars and amplifiers that have had hard lives, and spend (not waste) my time and money scaring them up and making them playable again. That’s pretty flimsy, I know, but damn it, it works for me, and I’m going to go with that.

Well, back to the cool stuff I saved from the dumpster. The old Epiphone guitar was made in 1939 or 1940. Electric guitars were pretty new then, and the pickups that they had were primitive and fairly experimental. Designs diverged widely, as did the amplifiers through which they were played. Most Jazz musicians played non-electric archtop guitars at that time. There weren’t many amplified instruments period. Bennie Goodman hired an electric guitar player named Charlie Christian, who he added to his band around the time my old Epiphone guitar was built. He did so as an experiment, and spent a lot of time at band practice, shouting “Turn that goddamn thing down!” at Charlie. Charlie revolutionized the Jazz Sound, along with another handful of Black musicians who were willing to experiment with amplified guitar sound. Charlie played a Gibson electric guitar, and joined Bennie Goodman’s band about the same time that my old Epiphone, Gibson’s main competitor, produced the Zephyr electric guitar model that I had just acquired from Scooter. Sorry, I was a history major at Ohio State, and I can’t help it. I’ll get back to our story now. 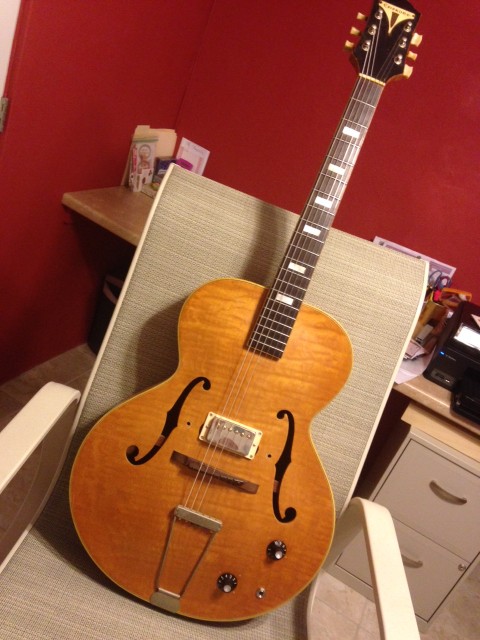 The Epiphone was rough! The original tuners were on the guitar, but that was it. All the electronics were long gone, as were the knobs, pick guard and jack. Scooter rummaged through his junk drawer, and came up with an old Gibson-designed pick up that he had experimented on, by re-wiring it, years before. He found a couple of knobs that could be used to adjust the original tone and volume controls, which had been replaced with shabby, mismatched newish parts. There were two holes in the top of the guitar, that had once served to secure an experimental “hand rest,” which had been about the size and shape of a metal garbage can lid handle. Since the guitar was made out of very pretty, highly-figured maple that would be damned hard to patch, I was stumped: What to do? The solution was devised a week later by “Ollie”, who works at a St. Petersburg sporting goods shop I frequent. He reasoned that since anything else would look like I’d tried to match the wood on the guitar top and missed, something totally different ought to be used to cover the holes. Three days later, he showed me two .45 caliber empty brass cartridge bases that he’d cut down to a height that didn’t project into the air, but covered the ragged holes exactly. I was totally different than anything I’d come up with, and in my mind, looked just right. “Let’s do it!,” I said, after three seconds of thoughtful consideration. Ollie is a careful craftsman, and good with small detail work. The end product was innovative, looked great, and was certainly a one-of-a-kind touch.

Now, I had to polish the body of the old guitar. That wouldn’t be fun, but the original lacquer finish was rough, scuffed and grubby, and specked with paint spatters and who-knows-what unpleasantness. The old maple would look beautiful, I figured. I rummaged around in the garage for some guitar polish and some felt pads and cotton rags, and got to work. The finish came to life, and emerged, a little at a time, from seventy-five years of abuse. The labor I put in wasn’t much fun, but the guitar looked great to me. Scooter’s hand-wound old pickup sounded splendid through the revitalized ’60s amp, which was now sporting a new speaker, tubes and capacitors. Now, wasn’t that better than sitting on my keister and watching an electronic time-wasting device subtract hours from my allotted time on the planet? While I was polishing up the guitar, and after I’d done likewise to the amplifier, I wondered what Scooter would have finished next. Maybe that old, Silvertone Amp-in-Case from the 1950s?  I can barely wait.

In the meantime, I’ll exercise the old Epiphone guitar and the old Fender amplifier I rescued from Scooter’s chamber of horrors. Now isn’t that a better way to spend one’s time? Well, I think so! The neighbors may disagree, but that’s one of the factors they should have considered when they bought a condominium.

Bill Dixon is a contributing columnist to Ragazine.CC. You can read more about him in About Us. 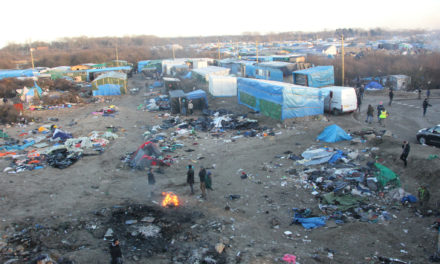