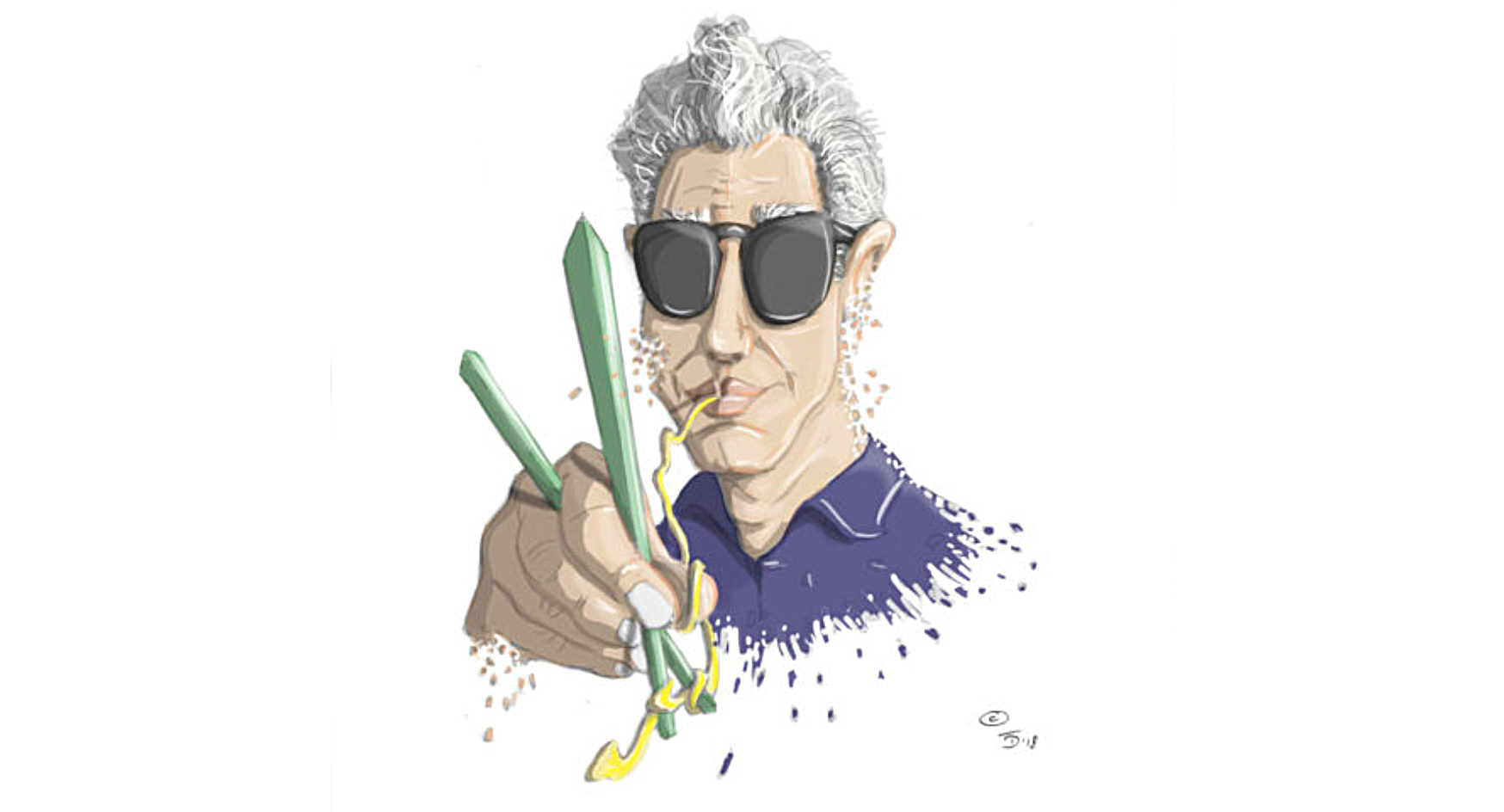 Put in equal parts sadness, frustration, wonder and anger, and simmer for… oh, I don’t know, for awhile. When ready, serve to friends accompanied by an aged Bordeaux and immerse yourself in whatever follows.

I am unhappy that my “never actually met” pal, my fellow world traveler, discussion aficionado and cultural translator decided to move on, without even a proper adieu. I mean we had so much more to cook. But, certainly on his own terms, so he went.

Amid the lament there is something left to chew on, so to speak — something that might be the only tangible raison d’etre for what happened. In short, there is a lot of conversation swirling around the notion of life and the mental interpretations that attach to it. Said another way, whether young or old, white or green, male or not, secular or non, it’s not clear how we, as members of the human species, come to see our individual and collective existence, how we embrace ourselves and others and what lies at the end of it all.  To a significant degree, then, the whole of it remains one big mystery.  But, as is our way, we struggle to make sense of the process as best we can. And as one of the professionals in the field, I can’t help but offer some considerations for what’s now on the public table of discussion.

Last evening, following the suicide announcements of Monsieur Bourdain and Kate Spade, I was involved in a lengthy conversation with several mental health administrators.  In essence, I was listening to them exchange ideas on how their client base had become more connected to suicidal impulses, citing some rather staggering statistics — like that suicide rates have increased 25% over the past two decades and that suicides out distance both car and murder deaths.  They also suggested that the increase is tied to the fact that the choice for suicide correlates to deep-seated mental problems that are framed predominantly in the context of having a disease. In other words, and similar to what has taken place in reaction to alcohol and drug abuse (and to some degree crime), the symptoms of suicidal motivation can be linked to pre-existing individual characteristics. In fact, most of the media experts were supporting the same theme – that there are more people who seem effected by an undiagnosed, pre-existing, physiological condition that lends itself to suicidal tendencies.

Now I don’t disagree with the idea that physiological factors, be they genetic or otherwise, have a lot to do with individual behavior. In a very basic way having particular physical characteristics makes certain activities more likely to occur. Nor do I object to the notion that one’s biological status can influence psychological adaptations. Clearly, as one recognizes his or her own abilities/attributes (or lack thereof), there will be a corresponding effect on one’s mental state. But what I do find objectionable is not giving the large number of social/system shortcomings their due. In other words, and along the lines of examining the overall mental psyche of our society, what is it about the political, economic and social milieu of the American experiment that might induce particular behaviors, suicide included?

A good place to start in further exploring this question is by referencing Emile Durkheim, the French social scientist who focused on how societies function and how the norms, values and social structures of any society might shape behaviors. Without going into the volumes of analyses that surround his studies it seems adequate to say that simple common sense would support his conclusions – in essence it’s hard to argue that a person is not to a significant degree shaped by his/her environment. Importantly Durkheim was also very much interested in suicide, which for him resulted from societal dysfunction. His book “Suicide: A study in sociology,” originally published in 1897 and reprinted in 1951 by Free Press, attests to this particular interest. Therein he noted that there were “egoistic suicides” where one is not sufficiently integrated into social groups, and suicides that result from the condition of “anomie,” where the rules and regulations as to the norms and values of society are so blurred/unclear that people could just lose their way. In total, then, Durkheim opens the door for considering a great deal as to any set of societal norms and values anomie extols and how people might internalize/experience them, especially if they are out of balance. (And I would suggest the likes of Robert K. Merton, Robert Putnam, Karl Polanyi, Henry George and Robert Kuttner for more discussion of this subject.)

In applying Durkheim’s thoughts as to our own norms and values, functions and dysfunctions, as well as the nature of our societal balance,  one might begin by examining how the principles of democracy — think justice, fairness, equality, etc. get mixed with the practicalities of capitalism — think competition, material success, consumerism, etc. In this light it’s fair to ask to what extent these principles and practicalities can co-exist, how their interpretations might conflict with each other and what type imbalance might be evident in terms of overall societal objectives? In addition, a look into how our cultural instincts (tendencies that become part of our behaviors over time) get framed – think of these instincts in relationship to how generations were affected by their particular set of societal variables, especially in eras like the industrial and technological revolutions. In this regard, and in similar context, we would also have to consider our contemporary social concerns – think of work/labor problems, changing family dynamics, the environment, racial and gender issues, and even war and peace.   And we would have to also examine how thoughts connected to spiritualism and even happiness get shaped and to what extent each can actually be satisfied. All of these elements are pertinent to how people are acting and reacting in our society. (Given today’s social and political chaos, the individual and institutional distrust, the mixed messages coming from leadership, the partisan news reporting and even the nature of marketing/advertising it’s fair to imagine that anyone who chooses to think-feel might be suffering from some form of anxiety disorder!)

It’s important to add that behaviors like suicide (or deviant behavior in general) don’t necessarily run across cash-color-class lines. In other words, social conditions don’t necessarily translate into particular behavior. In this sense one’s individual character may be tweaked or tempered by any set of environmental circumstances, which would help explain why successful people like Bourdain and Spade have the problems they had.

So, given the integration of biological, sociological (including political and economic concerns) and psychological considerations, our behavior is indeed complicated. And although one feature may be more dominant than another in any given circumstance or at any given moment, the overall collective pressures created have to all be considered. This then leads us to the question of what we might do to address all of this – in essence how can we face up to the daunting task of legitimately dissecting or deconstructing the mental health of our society?

Without presuming an exact blueprint (i.e., this should be considered a work-in-progress) the answer to the question could well take the form of a Civic Education Project.  Under the banner of “truth to logic” we could seek to improve upon the lives and life skills of our public. In this context we could examine our American experiment, including our shortcomings – what they are, what they entail, where the work needs to done and what methods might best apply – all with an eye toward improving the overall public/ civic health. It’s not difficult to make the case that talking about ourselves in an open, consistent and continual way, especially with education as the base, can only prove to be beneficial. So why not create a project, with a model developed in post-secondary education then extended into secondary and public education, to make this happen? What do we have to lose that we are by most accounts losing anyway?

Tough stuff for sure, but I think you get the point. We have a lot of work to do if we want to be serious about concerns like suicide. (As well as those of obesity, opioid-drug abuse, violence, crime, etc.) And in closing, I want to offer another thought. I want to add that the picture of an engaged, culturally astute, caring citizenry could easily be attached to the legacy of Anthony Bourdain.  As he would undoubtedly prefer, the talk around our public table regarding the human experience should always be happening — in essence the beat should always go on.

So with this in mind, and wherever you are Anthony, have one on us. It has truly been a most enjoyable acquaintance – Salude.