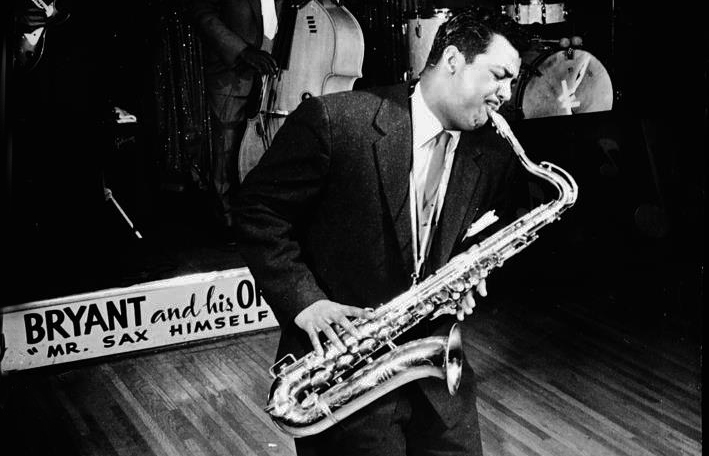 Rusty Bryant at the Carolyn Club

I was lucky enough to be Royal Rusty Bryant’s friend in the later years of his life. He came to play at the Hot Times Festival in the Near East Side of Columbus, Ohio, one year, and talking backstage he told me of his desire to preserve the African American jazz heritage that was part of the oral history and cultural fabric of the Near East Area. Before that day I had never met him but had grown up with his tune “Night Train” or “All Night Long” that was a hit during my youth, always playing on the old radio in my parents’ house. Even in his advanced years his playing was amazing. In that rag-tag outdoor neighborhood tent venue his sounds made everyone stop and listen. His tones were fat and round and filled with expression and all the other players fought to share the stage with him. Rusty, of course, loved playing with his old buddies like Jimmy “Stix” Rogers, Hank Marr, Arthur Baskerville, Sammy Hopkins, Harlan “Ol’ Boss” “Raleigh” Randolph and Gene Walker, but also loved the young guys sitting-in, working to hit their stride. 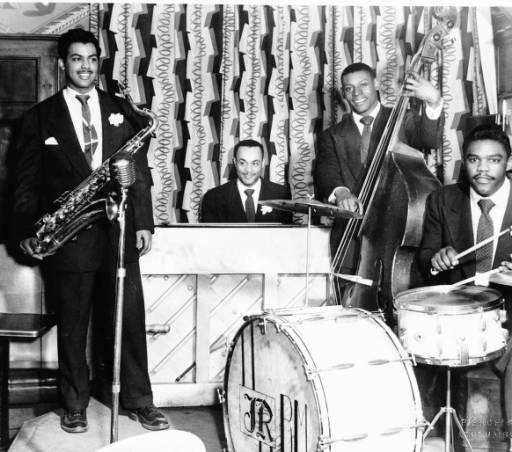 RUSTY AT THE REGAL/CANDICE WATKINS PHOTO

I agreed to help Rusty and his friend Jimmy “Stix”, who had at one time held the Guinness Book of World Records title for the longest continuous drum solo. Though I was unsure what I could really do, the work eventually ended up taking years and resulted in a large collaborative effort with a dozen or more contributors. Two editions of the first local history book “Listen For The Jazz: Keynotes In Columbus History!” were born rooted in a scrapbook kept by Columbus musician Arnett Howard and more than doubled by the Call & Post archives thanks to Amos Lynch. In the years since, that work has resulted in several more local and regional history books, a year-long exhibition and associated programming at the Ohio Historical Center, three live jam session CDs and volumes of research, some of which is online at www.artsfoundationofoldetowne.org.

Rusty was born in Huntington, West Virginia, and grew up in Columbus, Ohio. He created the Carolyn Club Band in 1951. In 1952, his live recording “All Nite Long” (a faster version of “Night Train” recorded live at the Carolyn Club) became a hit R&B single in the U.S. and is the tune I heard on the radio all of my youth.  In 1954 he signed with Dot Records and released albums all through the second half of the 1950s. But by the late 1950s, Rusty returned to Columbus and began playing with pianist-organist Hank Marr. A very young Nancy Wilson was plucked right out of Rusty’s band by Cannonball Adderly, who helped her get signed with Capitol Records. In 1968, Rusty played on a Groove Holmes album called “That Healin’ Feelin’ after which he began working with Prestige Records. In 1970 Rusty’s album “Soul Liberation” put him at No.35 on the U.S. Black Albums chart and No.15 on the Top Jazz Albums chart.  Rusty was very well known in England and Europe as an innovator of the “Acid Jazz” sound.

Toward the end of his life, Rusty again came home to Ohio and founded a program bringing instruments into local prisons, teaching music to the inmates as well, and accomplishing his pivotal role in founding the Music in the Air series through the City of Columbus Recreation and Parks Division. Rusty was an active participant in the “Listen For The Jazz” project and its associated Jams and performances, and he continued to record and play with local and national artists until his death in 1991.

Rusty loved to tell stories and told of sneaking into the front seats at the Palace Theatre and watching the orchestra; he said you could smell the polish and see the flash of the horns, he knew what he wanted to do. Appropriately, when Rusty passed a memorial Jam was held and artists from all over the world came. Included in those in attendance was Grover Washington, who as a youth had spent some time living in Columbus and who said he used to sneak into the alleys behind clubs where Rusty would play on the Near East Side and listen. He claimed Rusty to be one of his largest influences.

Rusty Bryant is the father of the late pop singer Stevie Woods, who recorded “Steal the Night” and “Just Can’t Win ‘Em All.”