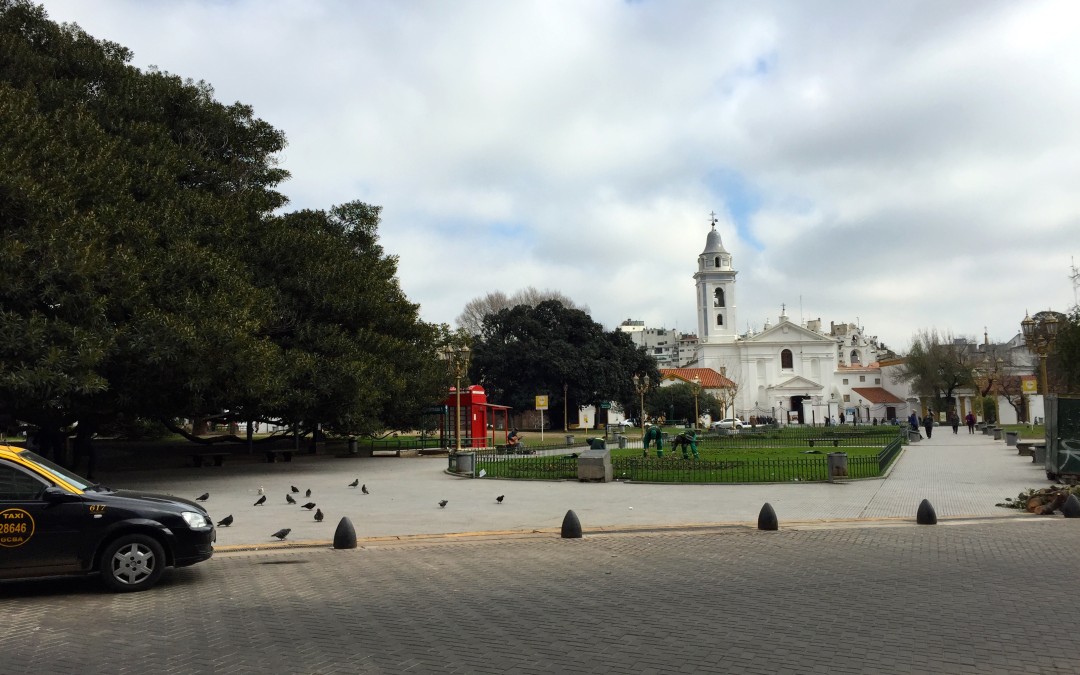 The Basilica Nuestra Señora Del Pilar (The Basilica of Our Lady of the Pillar). To the left is ‘El Gran Gomero’; at over 200 years old, it is the oldest tree in the Buenos Aires.

When you think of Argentina you might think of Malbec wine, delicious asado, romantic tango, and soccer sensation Messi. Each year, tourists flock to Argentina for its breathtaking landscapes and its rich cultural heritage, as well as its internationally renowned gastronomies. The country also has a vast array of climates from the subtropical to the polar, and because it has something for everyone, it makes for an ideal tourist destination.

And yet, unless one slips off the tourist guise and truly becomes immersed in the daily life of Argentine citizens, it is very easy to overlook a grave issue.

Argentina is no longer under a dictatorship and has been a democratic country for over three decades. Still somehow, there is a sense of apprehension and a lack of personal safety that could be associated with a populace under siege. In this case, the menace comes in the form of crime that endangers the safety of the people. The average citizen feels threatened, to almost a level of extreme paranoia, and this fearful environment has profoundly altered the condition of everyday life for Argentines.

An atmosphere of subtle, yet encompassing fear of one’s own safety hovers over the city. On the surface, life seems normal.  It’s only upon a closer look and careful observation of daily activities, that the climate of pervading unease becomes evident.

Small changes in routines and minor details expose the citizens’ dangers and fears. People try not to go out after dark, neither alone nor otherwise, particularly on foot. And even though taxis are expensive, people will take taxis to go everywhere, even if a destination is only five blocks away. Or if they choose to drive, they would park in a paid lot with an attendant who watches the vehicles, because parking on the street is too much of a risk.

When I first arrived to Buenos Aires, I was advised by local friends not to take out my iPhone in public because in Argentina it is worth $1500. There are many people who would do anything for that amount of money. I was further advised not to even bring a purse or bag with me, as this would make me more of a target. Walking along the city streets, I observed that very few women or men carried bags. I was also told that when paying, not to bring out my wallet and to be very careful not to show the bills that I had. Everything felt so secretive and furtive as I, and locals, tried to hide and cover all of our movements. So it came as no surprise, that whenever I asked for directions (and I speak fluent Spanish), the people I asked would almost flinch and crowd together, clutching bags closer, and responding tentatively, suspiciously. I found out later, that asking for directions was a common distraction pickpockets used to rob their victims. 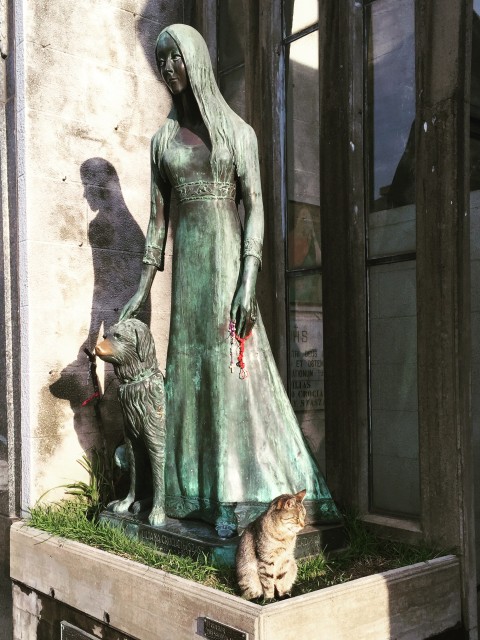 One of Recoleta Cemetery’s resident cats guards the Tomb of Liliana Crociati de Szaszak. It is said to be good luck to touch the nose of her dog.

Personal safety and fear for one’s life were popular topics of conversation that kept coming up, no matter who I spoke to (regardless of age, gender, class, wealth, location, etc.). Noticeably, what made their fears real was that nearly everyone had a story about how they had been robbed or almost robbed, multiple times.

Unlike in the past, in today’s Argentina, theft is such a common part of everyday life. Argentines make a marked distinction between what they call “simple robberies” and “violent robberies.” The first refers to robbery on a wide complexity scale: from basic pick pocketing to drive-by purse grabbing to more elaborate schemes. For example, you might be walking along the street when, suddenly, out of no where, some paint splashes onto your jacket while two extremely helpful and extremely charming people arrive to help you clean the mess. Then, once you are all fixed up, they leave and as they do, they abscond with your watch, wallet, jewelry, and any other valuables you might have had.

There are also some thieves who have elevated thievery to an art form. A middle-aged Argentine named Julio told me of the time when he was out to dinner by himself. The restaurant was mostly empty except for one other man, as it was that odd hour between meals. Julio started to eat when he noticed another man walk in with a full tray of food and sit down at a table in front of him. This newcomer made the strangest faces, grimacing dramatically or smiling and laughing hysterically. He was captivating. He often glanced meaningfully at Julio, as if the two of them shared an unspoken bond. This continued for about five minutes before the man stood up and threw away all his food untouched, and left.  It took another five minutes for Julio to realize that the first man behind him had walked away with Julio’s bag while he was distracted by the performance.

Crime does not discriminate. Even in Recoleta, Buenos Aires, one of the wealthiest, safest neighborhoods, citizens are robbed. Efrain, a long-time resident of the area, told a story about how one elderly woman was robbed, at her very doorstep. Twice in one month.

While these “simple robberies” make good stories and the people are able to laugh about them later, they can only do so because no one was hurt. The main concern Argentines have about these more and more commonplace robberies and thefts is the little regard robbers have for human life. People are not worried so much about being robbed, but are extremely afraid of being physically assaulted or even killed during a robbery. As one Argentine told me, “Life means nothing to thieves.” In this current climate, unlike cash, life holds no value. He added that most of these robbers are so high on drugs, that they aren’t even thinking and this is what makes them so dangerous. “Violent robberies” create an underlying, all-encompassing sense of fear in everyday life in a country where people once slept with the front door open.

Monica, a woman in her early thirties, has recently had plenty of experience when it comes to being robbed. The first time, she didn’t have anything in her purse. So when a man ran by and tore her bag from her, she was actually relieved because she was just happy that nothing physically bad had happened to her. But the second time, only a lucky coincidence saved her life.

In order to get home, Monica had to walk six blocks alone after getting off her bus.  She never made the walk after 10:00 pm. On the night in question it was 8:00 pm. She had just gotten paid for the last month’s work and she also had all her identity documents with her. She walked, quickly, along the sidewalk, which had street lamps at regular intervals. She had maybe three blocks left when she heard two guys coming down her street on a motorcycle. At first they passed her. Then they slowed down and circled back. Monica started to walk faster; only two blocks to go. When one of the men jumped off the motorcycle, she ran.

The man was fast, catching up to her in a few strides. He pinned her against a neighborhood fence, jabbing the cold, hard barrel of a gun into her side. Looking into his eyes, Monica could see that he was drunk or drugged up, maybe both.  Monica could have screamed, crying for help, but she didn’t believe that anyone could help her in time. She also didn’t want to startle the man into shooting her. She knew it was all too easy to kill someone. When the man started to pull her purse off her shoulder, she realized that she recognized him; he was a friend of Pedro, an ex-convict who she had mentored. Desperate, she pulled her bag back up her shoulder and cried, “I know Pedro, I’m a friend of Pedro! We work together.” It didn’t seem like this had any effect, as the man kept pulling on her bag, the gun still pressed against her stomach. His eyes were crazed.

The other man on the motorcycle finally seemed to register what Monica said and called out to his friend with the gun. “She knows Pedro, she’s cool. Come back!” After what felt like half a lifetime, the man pulled back the gun, let go of the purse, and stumbled back to the motorcycle, where the duo then took off. Monica ran the rest of the way home. And nowadays, even though Monica can barely afford it, she takes a taxi for those six blocks every time because she doesn’t want to risk a third encounter.

From another local, I heard a story about a young couple returning from a dinner date. As the boy dropped off the girl at her house, a thief rushed out of the dark. The boy was just able to throw the girl inside, along with her bag, which was the thief’s target. The boy asked the girl to close and lock the front door, even though he was not able to make it in himself. Then, for some unknown reason, possibly out of frustration at being deprived of his prize, the thief stabbed and killed the boy on the very doorstep of the house, where the girlfriend could only watch, unable to do anything.

Like these, there are countless other heartbreaking stories. In Argentina today, fear is real.

And yet life goes on. It must.