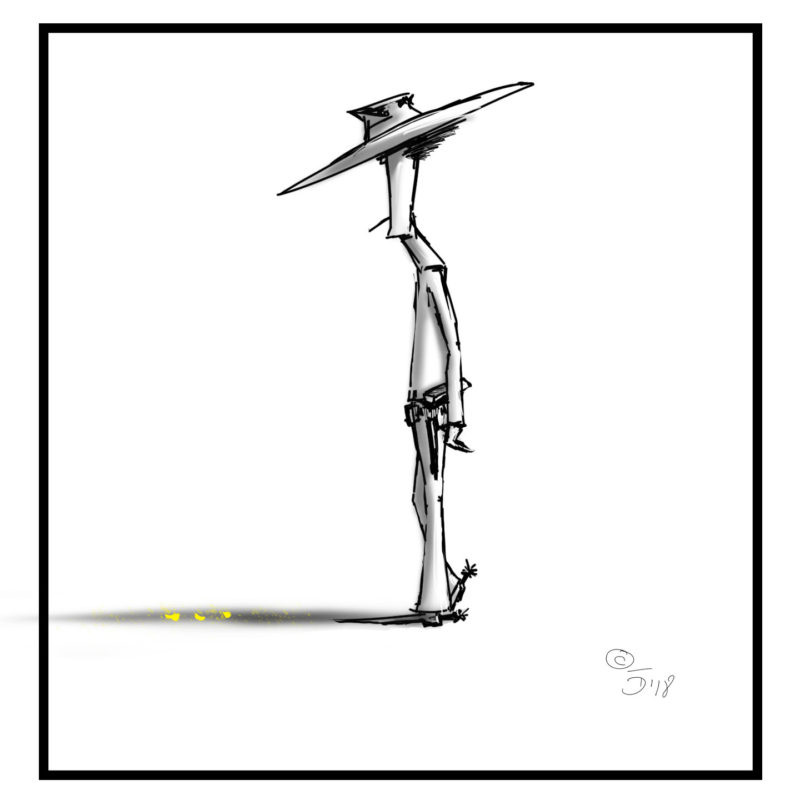 The Death of the Gold Digger

I liked to go to the cinema even before I started going to school, and until I was twelve or thirteen I had already seen various movies. The film “The Magnificent Seven”, which was shown in cinemas in the first months of 1965, if I am not mistaken, has marked the beginning of my puberty in a special way. I can even say that I entered puberty with this movie, which opened my eyes towards a new horizon. Less customarily for a provincial cinema, where films were shown once a day, in the evening, at 8, “The Magnificent Seven” was programmed twice or even three times a day; in the morning I remember that I took advantage of the fact that after the movie ended one could remain in the cinema hall for the next show and so I stood glued to the chair from the first to the last show, forgetting about everything and joining the seven vigilantes in their magnificent fight for good against Calvera’s gang, which used to terrorize the peasants from a Mexican border village.

All seven characters, although endowed with different personalities and life experience, were so conceived by the film makers that they equally attracted the sympathy, admiration and respect of the viewer, and likewise did the actors that had been chosen to play them on screen. Starting with the mature, sensible Chris (Yul Brynner) and ending with the young and impulsive Chico (Horst Buchholz), there couldn’t have been a better cast. Although the American movie had been conceived as an adaptation of Akiro Kurosawa’s “The Seven Samurai”, later, when I saw the Japanese film, it seemed a pale copy of John Sturges’ Western.

Yet I do not intend to write here either about the actors’ skills, the success of director John Sturges in making a seminal movie for the history of the American Western, or about the role this movie played in my growing up. In the movie, among the seven vigilante gunfighters hired by the Mexican peasants to get Calvera, there was an older friend of Chris, a cheerful, robust, middle-aged man named Harry Luck. This Harry was one of the adventurers who roamed the American Southwest in the last age of the frontier, and he had a belief, an aspiration, that was rooted deep in his soul. Harry Luck thought that somewhere in the Sierra Madre mountains, at the border between the United States and Mexico, there was a gold mine from the times of the Spanish conquistadors or the ancient Indians, a treasure that he had to find, sooner or later. He wasn’t called Luck in vain. When Chris tells him about the meager pay offered by the Mexican peasants, for which he was supposed to risk his life, he is so convinced that behind those symbolic wages whole sacks of gold were lying hidden in the mountains that Chris hesitates to dispel his deeply rooted illusions. And so the adventurer, accepting to play the game without revealing his secret, significantly concludes that the dollar is as big as a cart wheel and enthusiastically joins the vigilante band.

In the border Mexican villages life was simple and austere, without any clue those godforsaken places threatened by outlaws would offer any treasure other than peasant work or the perpetuation of traditions. Despite that, the adventurous gold digger is not dissuaded from believing that he had almost reached Eldorado. He takes advantage of every opportunity to question the peasants about the gold  to be found in abundance in those places; for sure, Calvera was not a fool to spend his time there just to eat the local food and be happy with the few pesos he took from the mayor, which would not have been enough even for cigars!

In his aspiration to discover Eldorado, Luck enrolls under the flag of a just cause, thus proving he is full of both perseverance and optimism. His eyes start twinkling only when, eventually, after the usual dinner, one of the peasants seems to confirm his suspicions regarding the gold that is supposed to be in the area. “Was he talking about the gold of the old Indians?” the peon wants to know. “Yes, yes, this is what I am talking about, where do you hide it?” Harry Luck becomes charged up, all eyes and ears, waiting for the great revelation. Hearing this, the Mexican peasant puts on a somewhat naïve smile and declares that he would have become a rich man long ago, had he known where that gold was. Harry cannot believe it; disappointed, he imagines perhaps that the peasant is a cunning man who is hiding the truth. He stays true to his chimera and he couldn’t have done otherwise. His whole existence would have been in vain if  Eldorado ceased to exist. Eldorado must exist, otherwise, what was the sense of everything? Chris, surely, was going to tell him the truth about the hidden treasure, to repay him with a sack of gold after Calvera and his gang beaten and permanently banished from the area. Luck, animated by his belief, joins Chris and the other “magnificents” to valiantly fight and defeat the outlaws — heroes fighting for the poor and the oppressed.

But Harry Luck gets unlucky. During the last fight with Calvera’s gang, he gets shot to death. Chris comes and lifts his wounded friend, carrying him in his arms during his last moments. Fatally wounded, Harry Luck gives a start… opening his eyes for the last time, eyes shining with an inner light, the light that had guided him to those godforsaken places, he wants to hear from Chris, now, before their final parting, the truth about the treasure and reward they were due. Psychologically, it is a delicate moment. The watershed moment passes, though, quickly, and Chris tells his agonizing friend exactly what he was expecting to hear – that there were buckets of gold, “whole sacks of gold”  waiting as a reward for what they had done. With a sigh of delight and an expression of beatitude on his face, Harry Luck dies in peace.

One can reproach Chris for not telling his friend the truth in such a serious moment. Yet what else could anybody have done in his place?

Daniel Dragomirescu is a Romanian prose and essay writer, translator, editor and journalist. He is a member of the Romanian Writers’ Union. He is the chief editor of the magazine ”Contemporary Literary Horizons” and a coordinator of the bilingual intercultural series ”Bibliotheca Universalis”.  “The Death of  the Gold Digger” is a selection from Dragomirescu’s book in progress, “Men and Puppets.”