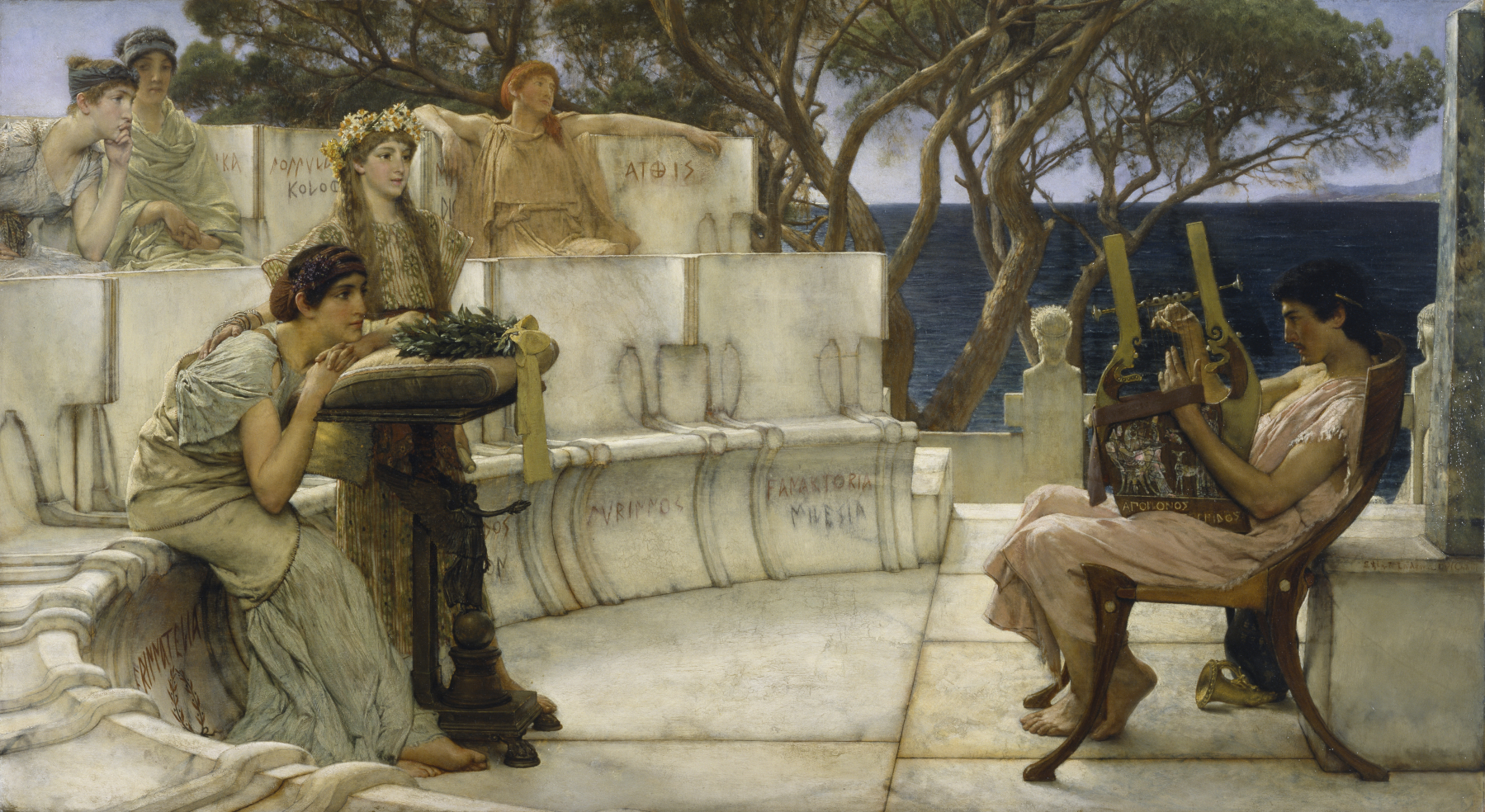 A nineteenth-century painting by the English painter Sir Lawrence Alma-Tadema depicting the poetess Sappho gazing on in admiration as the poet Alcaeus plays the lyre. (Wikipedia)

Classical Poets Have a Life of Their Own

An interview with Evan Mantyk

van Mantyk is the president and co-founder of the Society of Classical Poets: www.classicalpoets.org. He teaches literature and history at an academy in upstate New York and previously was a news editor and reporter in New York City.

Q: Please describe The Society of Classical Poets and your duties:

A: The Society of Classical Poets is dedicated to the proliferation of classical poetry. What does that mean? It means poetry usually with

rhyme and/or meter. It also means poetry of good character that puts the reader first, not the poet. The government’s “Survey on National Participation in the Arts,” found, over the last twenty years or so, a sharp decline in the number of people who had read or listened to a poem within the last 12 months while other literary forms stayed static. I review submissions, publish them on the website, edit the annual print journal, judge the annual competition, work with poets and writers, and coordinate with the society’s executive staff and advisory board.

Q: When did the Society begin and from what countries are contributors from so far?

A: 2012. We have poets from all over: America, Canada, England, Scotland, Ireland, France, Australia, and India. And even occasionally South Africa and Singapore.

What forms of classical poetry and the most popular with your readers?

A: The sonnet never gets old. It is the definitive form. The villanelle and limerick pop up somewhat frequently too. We used to get more haiku, but they seem less popular now. I have a poet who writes in what he calls the “tennos” (sonnet backwards). Instead of 14 lines with 10 beats (iambic pentamter), he writes 10 lines with 14 beats (iambic heptameter). It is a surprisingly fluid and effective form. Most poems submitted are not in a particular form but in a particular meter and the different forms of meter are explored in the book.

Q: What writers have influenced you the most?

A: My biggest poetic influence has been Henry Wadsworth Longfellow, who was at one time America’s favorite poet and a household name. Before the influence of the Internet, television, and even radio (which in fact is the vast majority of our human history), poems rang out like rousing and echoing bells. They were the movies, news media, and popular songs all in one. Can you imagine what sort of vivid thoughts and perspicacious states of mind people must have been in at the time? This was the state of mind, or realm we might say, where Homer, Shakespeare, Milton, and Wordsworth built poetic palaces of beauty and grandeur. Longfellow is close enough to the present that his language is accessible and his sense of storytelling is close to our own today, but he still draws upon and fully utilizes that rich heritage and poetic realm of the past. He was a bridge for me and continues to inspire me.

Q: What are some of the most popular essays on your website?

A: I really enjoyed the one on riddles.

The most popular essays usually explore themes that are core to the society, which are the revival of traditional poetic forms, meaningful themes, and the experience of beauty. They give insight into the whole “classical” thing.

Q: How does the Society manage to offer an annual contest without entrance fees? What changes in The Society of Classical Poets would you like to see in 5 years?

A: We have people who donate to us because they truly feel the uplifting beauty and power of classical style poetry. They really believe in it, as I and the other executive staff do. Also, we make a profit from our annual Journal. Perhaps most importantly, myself and others who run and write for the Society do not get paid, so it is all volunteer work and any money just goes back out into promoting great poetry. It is a labor of love. Of course, ideally at some point we could turn into a day job.

This  e-interview was conducted in October 2018.

Carol Smallwood’s books include: Prisms, Particles, and Refractions (Finishing Line Press, 2017); Interweavings: Creative Nonfiction (Shanti Arts, 2017); In Hubble’s Shadow (Shanti Arts, 2017); In the Measuring (Finishing Line Press, 2017); and, Library Partnerships With Writers and Poets: Case Studies (McFarland, 2017).  Her previous articles in Ragazine include an interview with Jordan Blume, and a review of 86 Sonnets. A multi-Pushcart nominee, Carol Smallwood serves as judge and reader for magazines.