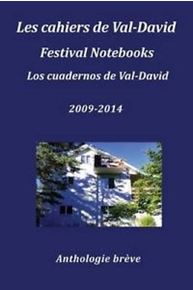 Trilingual anthology of international writers who participated so far in the International Writers’ and Artists’ Residence at Val-David, Quebec, Canada)

This brief anthology that saw the light in 2014, harvesting the best works of writers and poets who reunite at Val David Writers and Artists’ Residence for the bi-annual festival, is the fruit of all who appear into its pages, and many more that came through the open door of poetry, inside. A collection of works by 47 poets and writers, the book represents five years of festival activity and bears the echoes of the successful venue, becoming a milestone in its history.

The hostess of the festival, Flavia Cosma, is the President of the Writers and Artists’ Residence, an author with more than 30 books published in various genres of literature, poetry and novelistic, as well, and the person behind the whole existence of the festival and the publication of this anthology. (http://www.flaviacosma.com/Val_David.html)

Seeking support from the Local Development Center in the Laurentians, for publishing and receiving it with compliments for such a beautiful initiative, Flavia Cosma followed by the other authors in this book, are highly appreciated in the area, Val-David being well-known for encouraging arts and culture.

Among the people that came in through the door of Poetry and Spirituality at the Residency are the Mayor of Val-David, Nicole Davidson (always present), the Romanian General Consul, Victor Socaciu and the Ambassador of Romania, Maria Ligor.

How not to mention also the poet, essayist and composer Luis Raúl Calvo, from Buenos Aires, Argentina, who’s emblematic print is present through music and poetry readings at most of the festivals. From faraway he joins every year virtually, proving a brotherhood in spirit with the vibes of Val David’s Festival. His Cd, “Cual es la verdad de lo vivido?”, with music and lyrics attached in a pocket at the end of the book, creates a musical background for every lecturer who starts exploring the book.

Poets and writers from all over the world have joined in the pages of the Anthology. Their cheerful presence in the beautiful saloon at the Residence, decorated with paintings and bouquets of roses freshly cut from gardens, and the magical moments delivered together are immortalised in this book.

A certain place at the festival, and in the heart of poetry lovers, belongs to a group of poets and writers of Romanian origins who frequent the Residence. They found their own voice in Canadian and Romanian literature, some of them being consecrated and others less-known, still modelling their style. I begin with Felicia Mihali, novelist and history teacher, Carmen Doreal, poet and painter, Adrian Erbiceanu, poet and the President of the Association of Romanian Language Writers from Quebec, Eva Halus, poet, painter and journalist, Traian Gardus, epigramist and English teacher, Lia Ruse, poet (these last two poets unfortunately missed the submission for the Anthology), all from Montreal and surroundings. There is Luminita Suse from Ottawa, who embraces a Tanka poetry style and, of course, Flavia Cosma, from Toronto, with great achievements in literature. I mention also Clelia Ifrim from Bucharest, Romania, who joined the Tenth edition of the festival virtually from Bucharest, Romania and Rodica Gabriela Chira, from Alba Iulia, Romania, who joined the Residency Program for 2 weeks in June 2010.

The festival has also its special Quebecoise vibes, with the participation of poets and artists from Val-David region, as Sharl Dubé, author-composer-interpreter and Anna-Louise E. Fontaine, poet and painter. Jeremiah Wall, poet and musician from Quebec, born in the USA. All three contributed plainly to put poetry and music on stage at the Val David Residence and have some poems to represent them in this book.

The anthology opens with a forward by Denis Emorine, winner of the “Poetry Prize 2009” of the Var Academy. This is how he defines the poetry phenomenon at Val-David and the anthology:

“Val-David is a world in itself: it doesn’t fly a flag, but occupies a territory in Quebec, where the languages of the World are reigning, all equal. In this anthology, there are three to join their hands: le francais est ma langue maternelle, English is my mother’s tongue, y me gusta mucho la lengua espagnola: what a pleasure to find them all in this anthology!”

One by one, in an alphabetical order, the poets and writers are giving insight into their creativity and into the Val-David festival, steering the imagination and sensitivity of the reader. And, in the end, inviting other writers, poets and artists to come to Val-David and open the door of their hearts sharing their creations on stage.

Because it would be hard to quote just a few lines from each author or to make a selection that highlights just some of them, in the detriment of the others, I strongly recommend you to seek and find this anthology, and to read it. And if it conquers your heart, as it did to all of us who participated in the International Festival of Writers and Artists Residence at Val-David, please come visit or participate in one of the bi-annual festivals.

Where to find the anthology:

All details about the International Poetry Festival and Residency: www.flaviacosma.com/Val_David.html