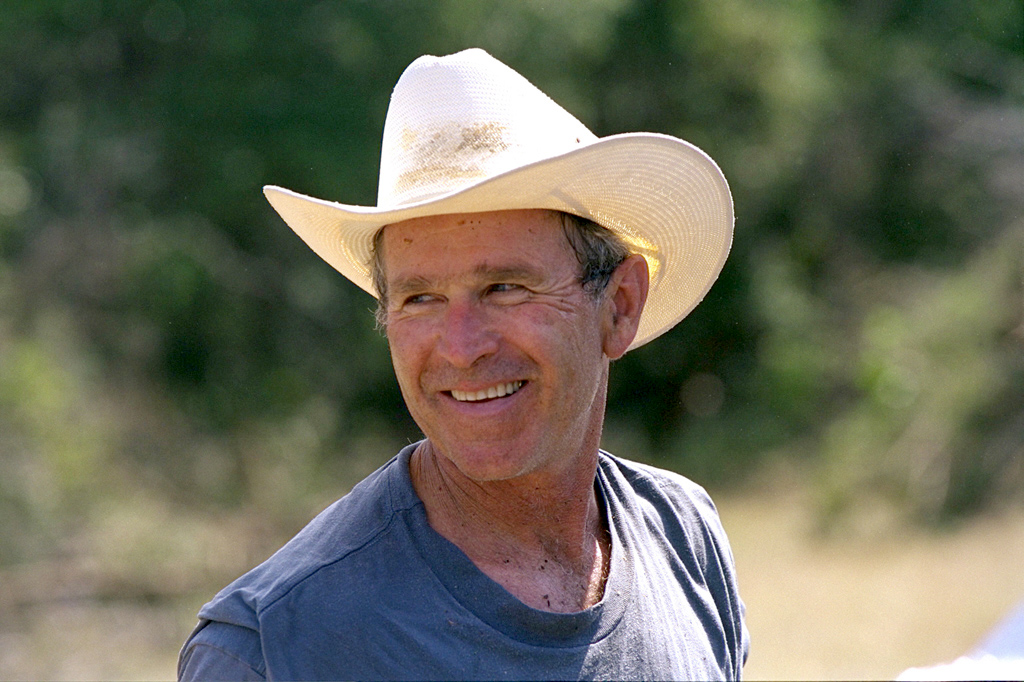 W on His Ranch

Before Laura stirs on her side of their California King and clomps downstairs to start the coffee, W likes to go for a walk. He tugs on his dusty cowboy boots, dons his sweat-stained Stetson, and steps outside into the early-morning chill. Major and Mallory are furry comets streaking across their property in the pre-dawn light. W loves this time of day—right before the red ball of sun breaches the sky to the east and sets the clouds ablaze. This early, W feels like the last man on earth

W as Described by His Wife

L: A lot of people don’t understand him, but that’s not because he’s a complicated man. He’s a secretive one, and there’s a difference. There’ll be days when he won’t talk to anyone. He’ll lock himself in the study or his game room, and he’ll only come out to fix himself meals. And then, a day or two later, he’ll emerge like a man reborn, happy as a clam, and ready for whatever the world decides to throw at him.

W as Described by His Father

HW: When W was ’bout thirteen or so, he and the other boys—Jeb and Neil; I don’t think Marvin was born yet—they were playin’ outside and they discovered this baby bird that had fallen from its nest. Now I knew this bird was as good as done for—the mama bird, she’d never take it back after the boys had had their hands all over it. She wouldn’t recognize its scent, and, anyway, the little thing had a broken wing. Jeb wanted to fix a shoebox with straw and a little cup of water and I said, That’s fine. Why don’t you do that? And W, when the others were gone, he said, “Here, Dad. Let me take care of it.” He cupped the bird in both hands and set out into the backyard. When Jeb and Neil came back, we told ’em the bird had flown away.

He Discusses the Great State of Texas

“When you think about it, the United States is kind of like a box a chocolates, ya know? And Texas is the one with the marshmallow filling.”

W in the Air National Guard

W spots them across the room: Three male officers in crisp, white uniforms. They’re surrounded by a gaggle of women in bright dresses with loud, party laughs. W pours back the rest of his scotch and wishes, just for a second, that he had joined the Navy.

He Meets Dick at a Cocktail Party

“George, but my friends call me W.”

“Well, W. There’s something I’d like to show you. It’s in my study. But first, let me ask you a question: You like guns?”

Which W thinks is a silly question. This is Texas. Who doesn’t like guns?

W Puzzled by His Children

The house is still when W gets home. It’s almost ten—well past the girls’ bedtime. There’s a light on in the den, and W pictures Laura curled up in the armchair with a book, though she likely fell asleep waiting for him to come home. W loosens the knot of his tie and cracks open the cold cave of the refrigerator. He finds some leftover parmesan chicken in a Tupperware container and when he closes the fridge again, he notices a drawing stuck to the door by a magnet: It’s a crude depiction of their house. Out front are three stick figures with triangles of hair. Even the dog is there. W is nowhere to be found.

W Discovered by His Mother

She forgets something—the book she was going to return to the library, let’s say—and instead of backing up the driveway, she returns on foot. They’re both surprised—W makes a sound like air escaping a tire, and his mother quickly averts her eyes, pretending not to see the copy of Hustler on the kitchen counter and the sliver of W’s manhood. Neither of them will ever speak of this. Ever.

W Learns He was Conceived in Mexico

The topic comes up naturally: Laura and W are out on the veranda, having tea with W’s parents. They’re recently returned from their honeymoon—six weeks backpacking across Europe. It’s a scorching hot day, and, outside the shade, nothing moves.

“Laur, did Barb and I ever tell you ’bout our honeymoon? Went down to Mexico, came back with a little souvenir nine months later.”

“I wonder what I’d look like with a beard…?”

W Puzzled by His Children (Again)

The letter W receives from his daughter while she’s away at boarding school is written on college-ruled notebook paper and sealed with a rainbow sticker. As he always does when he receives a dispatch from his children, he takes their letter and retires to the study. Although he rarely opens them, the leather-bound books that line the shelves soothe him. The latest letter from his daughter simply reads: Dear Dad, I’m gay. Please try to understand. W is not gay and doesn’t understand. Still, he will try.

W on the Presidential Library

“I want all the usual stuff. And whatcha call ’em? The books with the pictures in ’em? Comic books? Yeah, comic books. For when I feel like doing a little light reading, ya know?”

He Loses the 8th Grade Bid for Class President

W has never felt this feeling before: a pressure in his lungs, like he can’t breathe. This, he tells himself, is what failure feels like. When his father raps softly on the door, W pretends not to hear him.

W Holds His Daughters for the First Time

His daughters—one in each arm—are light as bowling pins. W needs a moment to sit, to touch something solid, and feel the ground securely beneath his feet.

W at the Office

Every morning, after his meeting with his chief security advisors, he closes the door to the Oval Office for fifteen minutes—it’s all he can spare—and fires up his monitor. He’s splurged on The Sims 2 expansion pack. His avatar has aspirations (being abducted by aliens), wants (popularity), and fears (using a public toilet, life-long commitment) that are not so different from his own.

He Cheers on His Favorite Baseball Team

“He just hit the ball over the fence! What y’all call that again?”

He Addresses a Crowded Room

During his introduction, W is all laughs and warmed-over jokes, but as soon as it’s his turn to stand and approach the podium, his throat goes as dry as an overdrawn well and no amount of water can unstick his tongue from the roof of his mouth. He tries to remember the ease and elegance with which he delivered his remarks the night before in front of Laura, but when it’s his turn and all eyes are on him, his mind goes as blank as an empty radio station.

George Bush Saved from Snakebite (As Recounted by His Brother Jeb)

I can see the tiny, red puncture wounds just above the left knee. I make a tourniquet of my shirtsleeve and boost him into my saddle. We ride all day and night, and when the horse collapses from exhaustion, I drape W over my shoulders in a fireman’s carry. W passes in and out of consciousness; his leg has swollen to the size of an inflatable pool. On the ridge ahead, there’s a light burning in a lone cabin and I start hollering for help. Someone—a man—stumbles outside. The doctors save W’s life, but they can’t save his leg.

He Attends His Daughters’ Spring Recital

W crouches with his camera at the foot of the stage, sweat emerging in beads on his forehead. The foot lamps give off a tremendous amount of heat, but like the other parents, he’s determined to capture, in high resolution, the exact moment when his child first steps on stage. The music swells, and W jostles with the other adults, jockeying for position.

W as an Artist

He paints portraits, landscapes mostly, because he can’t ever seem to get the faces right. He orders canvases from a dealer in Dallas and the acrylics from a tiny art shop thirty minutes from their house. He prefers light, muted colors, though that doesn’t mean he won’t employ the vibrant, terrifying red of a Texas sunset if the mood strikes him.

W Interrupted While Reading to a Classroom Full of Kindergartners

W has never read this book before, the one about the goat. He’s almost as wrapped up in the high drama of the story as the children when he notices one of his aides approaching. The aide’s breath smells of stale coffee, and it takes a full moment for W to process what he has just been told. W closes his eyes and, for a second, the whole world stops.

Joe S. Pfister’s work has appeared in PANK, Juked, and decomP, and was long-listed by The Wigleaf Top 50 (Very) Short Fictions 2013. He received his MFA in Writing from Sarah Lawrence College.