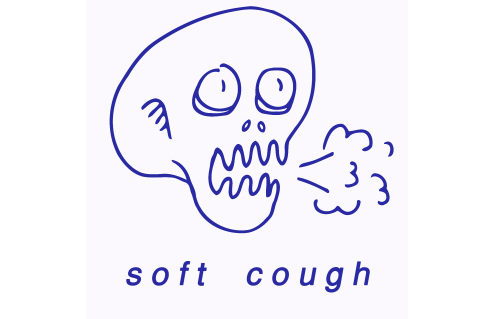 It’s a dark night in suburban Long Island where the snow lines sidewalks dotted with boxy homes behind green lawns. Beyond my block lays the vague grid of highways. The memories of wandering long hours beside busy highways and quiet residential streets plays a montage as I now drive easily to and fro in my mother’s car.

I’m off to a DIY show in Hempstead. This town is basically just referred to as Hofstra, due to the presence of the university name upon many signs and buildings. Soft Cough, a Geneseo-formed band that now exists in a long-distance formation, played a set alongside a few local musicians. I met Soft Cough before they were even a band when we attended the university in the Western New York town. This ensemble is comprised of four young men, Dan Pugh of Wantagh, Tom Kohn of Oceanside, Ben Freiman of Yorktown Heights, and Nick Koithan of Newfane.

The venue space, interestingly enough, is located on Hope Street and is known to the community as High Hopes. A sheet brandishes the name along with a pop up bubble reminiscent of days when computer monitors were square and filled with CRTs. The pop up reads, “Save DIY? Sorry, DIY cannot be saved” with a thumbnail of a floppy disc. There is a grid behind this window with palm trees and planets dotted in the background.

Along the walls of this venue, which is maybe about 15 feet wide and 20 feet long, are banners and flyers for Nonsense Magazine, a Hofstra-based humor publication. Clearly steeped in jokes, the venue also boasts a lamp that doesn’t work so great and a lumpy futon.  Despite the dumpy nature, this little room is filled with a delightful crowd of Long Island locals.

A scattering of instruments dotted the tiny stage, which was really only a carpet on the concrete floor. Just outside the venue is a backyard reminiscent of the many yards where I dawdled away hours as a youth. There is an iron table, a few chairs, a grill covered in snow, and a wobbly pathway to the front yard.

Soft Cough’s performance was cheeky. Ben, their drummer, sported a beat pad in this little DIY session, while Dan strummed on his fancy guitar with its glossy black finish, and Tom bounced his fingers along lo-fi bass lines with the blue body atop his lap. All three sing, but Dan and Tom pass the mic back and forth. Sadly, Nick couldn’t make it down for this performance, so they were down a guitarist.

I first encountered Soft Cough in basement shows along a much different suburban landscape. One surrounded by farms, that felt (and was) far from the City. We had no train tracks running, and the land tracts loaded with strip malls were much less frequent. The cold winters of Western New York featured crowded spaces with low ceilings where aspiring musicians could make noises together until something stuck. The sound was very much in the umbrella of indie, bordered with lo-fi, post-punk and soft rock in a mélange of underground malaise and poetry. The rhythms strummed and the melodies plucked will forever remind me of the days when I would listen to nothing but Pavement and local Pop Punk. Dan’s lyricism ties in the true nature of our life on this island as youngsters who frequent all the same venues and wear all the same styles.

Most people were adorned with at least one piece of ironic clothing. Many were happily stretching the boundaries of gender identity through fashion. Most wore flannel of some sort, with a beanie and a pair of boots, myself included. A few wore baseball caps, and there was even someone donning a blanket for an extra layer of warmth.

As a long-time fan of Soft Cough, it is a pleasure to see your friends make projects that last. They started in 2014. Three years later, these same kids still hang out and make music together. It’s a lot more hodgepodge than it was when we all lived in a small town in rural Geneseo, but it still happens. I had higher hopes for High Hopes, but I would go there any day in the warmer months of the year. The crowd was nice, accepting, and fun. The venue has plenty of character. The other musical performers I saw were very talented; sadly, I had to leave before catching all the acts scheduled to play.

Back on the road, I soon was lost — just as my cell phone died. I drove aimlessly, happily distracted by the rhythms of Fela Kuti playing on Hofstra’s radio station, until I found a familiar avenue and made my way home through cold night air lit by the bright streetlights of Long Island.

Greg Stewart writes the Around New York column for Ragazine.CC. He was an intern from The New School for Social Research, Autumn Semester 2017. You can read more about him in About Us.