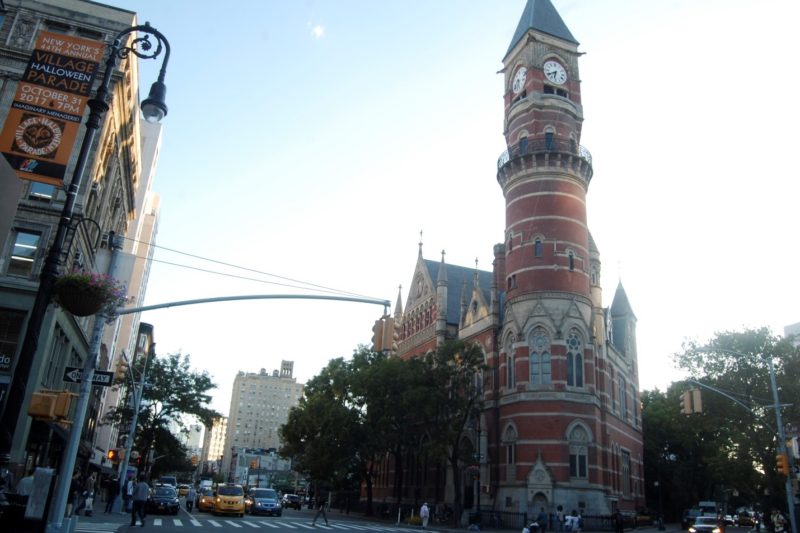 The old Library on 6th Ave. in the West Village. Greg Stewart photos.

and a Basement Booked

As I entered the Jefferson Public Market Branch of the New York Public Library on 10th Street and 6th Avenue on the night of the reception for “Drawing Set”, I heard a bustling vibration of voices emanating from the basement that one does not usually associate with libraries. As I descended the spiral staircase, I heard the young voices of children, alongside the din of accented English and Spanish. A small gathering of locals from the West Village congregated with the friends of those behind the event, Tod Lippy and Marco Maggi.

These two extraordinary gentlemen collaborated to form a truly exceptional showing of art. Tod, the founder and primary force behind the eclectic magazine Esopus, mingled with the friendly crowd, showing copies of the latest editions to interested eyes that were drawn to the bottom of this large tower in the historic building. Marco, an international artist originally from Uruguay who now lives in New York, slowly meandered between the groups of families and friends, expressing his deepest gratitude for their attendance at this event.

For his “Drawing Set” exhibition, Marco provided the readers of Esopus with a sheet of colored, blank paper alongside a sheet of tiny, custom decals. The readers were instructed to create their own, original art with these materials, then send it back to Tod. The results were beautiful in their range of content, branching from political to absurd, imaginative to logical. Many of the contributors to this project are practicing artists themselves, including Marilyn Minter, Kerry James Marshall, Thomas Nozkowski, Ellen Berkenbilt, Paulo Buscky, Lilliana Porter, and many more. There were nearly 80 submissions in total.

I got a chance to speak to Marco personally at the event; he claimed that Tod had become his newest friend through another Esopus event. After some discussion about that project, the two minds intertwined to create a challenge for Tod’s readers. The result was this wonderful artistic explosion. Marco expressed that he was blown away by the generosity of the readers to contribute their time and efforts into such a beautiful project that is totally underground, quite literally in the basement gallery of Jefferson Market. The Uruguayan artist told me that there was no one piece that stood out amongst the rest, but that the most exceptional aspect of the project was the dialogue between all of the pieces.

It was the way that  readers of Esopus put together their various perspectives to have this amalgam that is the pinnacle of such an experiment. One could glean that the readers of the magazine who participated were folk of a certain artistic caliber. Some pieces presented clear talent in technique, while others were clear social commentary. Of course, as one would expect in this day and age, there was even a showing of a certain President Trump on the wall. Many of the submissions were from New Yorkers, but there were representatives from Tennessee, Spain, New Jersey, Germany, Ohio, California, and many other places near and far. It was rather interesting to think that people from all spans of the globe were given the same materials, and all made such unique and evocative pieces of art.

In an interview with Tod I got some insight into the publisher’s job of acquiring content and working with artists for his beloved brainchild. Unlike many other publications, Esopus is basically a one-man operation. That means that Tod goes out into the world of writers, photographers, artists, and craftsmen and decides which pieces will make it out into the public through his magazine. One of the aspects of the mission of Esopus is to create a dialogue and space for collaboration between reader and artist. He has six artist projects for each issue which accomplishes this goal.

Currently the circulation of Esopus is about 30,000, with readers in all 50 states and 23 countries. The very loyal base of subscribers is about 2,000. The consistent success of Esopus has been its ability to provide the readership with an eclectic mix of art, as well as the good publicity that has been following it since its early editions. It has been reviewed in The New York Times, along with many international publications which have spread it around the globe.

According to Tod, Esopus was founded on the following concept: an annual arts publication that features multidisciplinary content presented in a striking visual format with no advertising. It is an unmediated expression of various artists which align with Tod’s ethos for arts. Each edition contains materials from the Museum of Modern Art archives, fiction, poetry, works on film, and visual essays. Tod’s vision, which one gathers immediately upon picking up one of these rather large editions, is driven by fusion; the culmination of various forms which comment on current events, historical happenings, cultural trends, and whatever strikes Tod’s fancy as artistically important to the production of Esopus.

It has been a 501(c)(3) non-profit magazine which runs primarily off of grants and donations, with only about a third of the revenue coming from actual sales of the magazines. Tod is a truly passionate individual who loves what he does. He executes almost all of the work involved in putting together the impressive collections each year. Most of his time is dedicated to this wonderful publication.

I also got the opportunity to speak with the librarian that helped to curate the event, Frank Collerius. His comments were rather robust. He told me about the moment when Tod visited Jefferson Market with the VP of Communications for all of the New York Public Library system. The librarians offered the first floor lobby as an option for the gallery space. When Marco was presented with the two options, he responded with gusto. “NEVER THE MAIN FLOOR! NEVER THE LOBBY! ALWAYS THE BASEMENT! ALWAYS UNDERGROUND! I LOVE THIS BUILDING!” This encounter with the incredibly friendly artist shows his dedication to living in the world of off-beat art. He sticks true to the ideals of an artist in the West Village, opting for something that is a little harder to find, something that lies off the beaten path, for all those who are willing to search for it.

The gallery for “Drawing Set” is on display until October 7th in the Little Gallery in the basement of Jefferson Market Library at 425 Sixth Avenue. Esopus can be found at book stores around the world and online at Esopus.org. 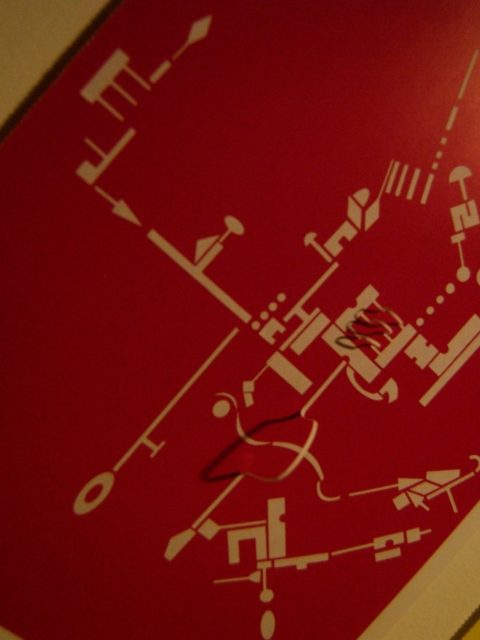 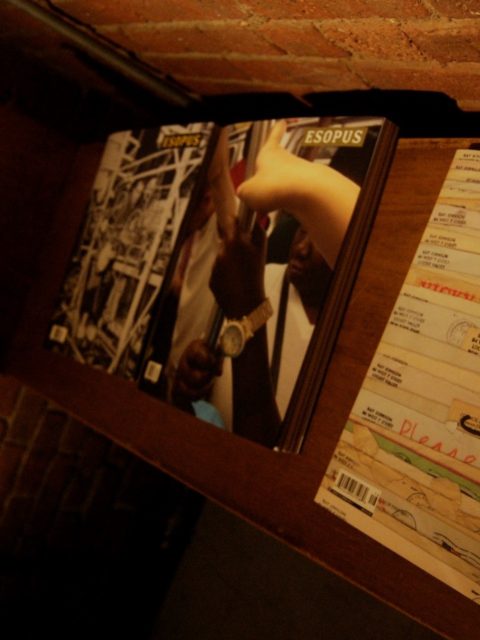 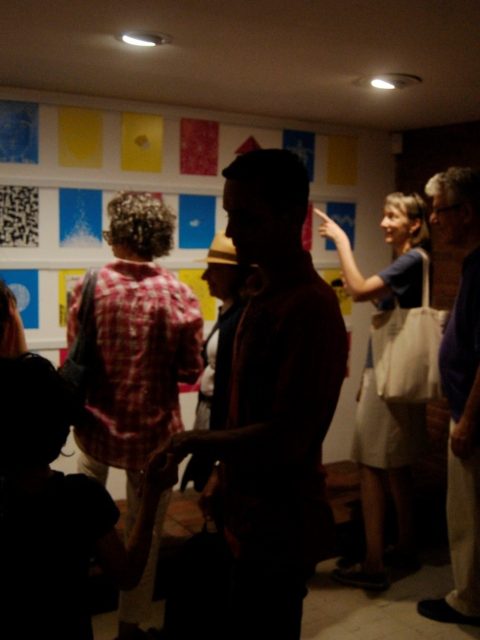 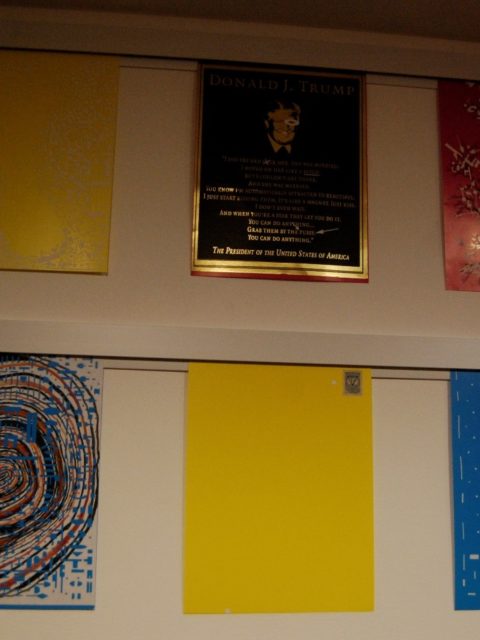 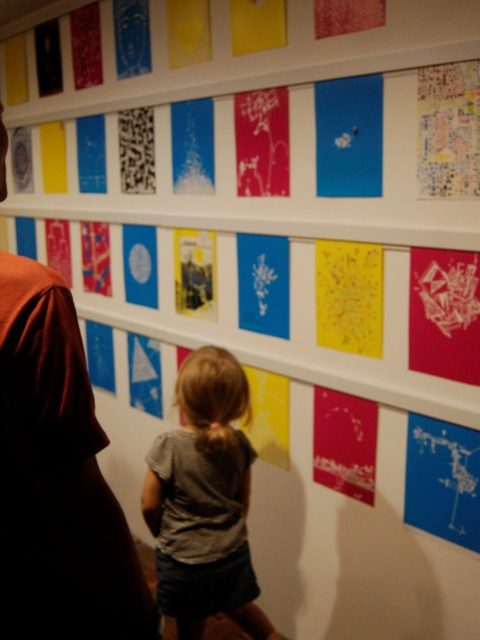 Greg Stewart lives in Brooklyn, New York, and attends The New School for Social Research. You can read more about him in About Us.