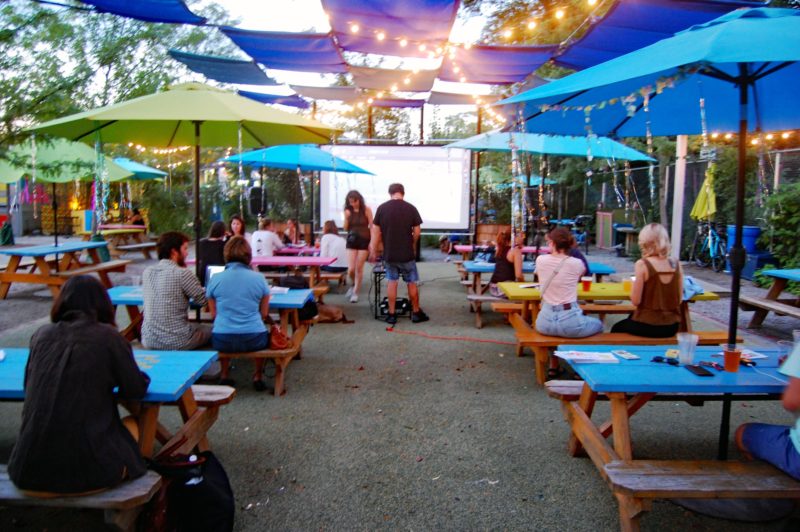 Nowadays sets up for the outdoor screening of the documentary, “What Lies Upstream?”

Upon entering Nowadays, I am greeted by the familiar sight of young women in high-waist shorts and tattooed limbs, a common theme in the now bustling neighborhood of Ridgewood, Queens. The backyard vibe is accentuated by the colorful picnic tables with umbrellas glistening with tinsel. The dog-friendly space seems to invite everyone to befriend one another with ease. The mix speaks to the fact that demographics of New York have been in flux.

Prior to the screening, a whimsical illustration of a wombat with the words Hyrax Films imprinted on it is projected onto the screen. String lights line a canopy overhead. The music prior to the film accentuates the mixed crowd, ranging from Spanish jam bands to ethereal electronic music. One can’t help but notice this environment is very kid friendly; multiple families enjoy the outdoor environment in a city where so often people are cooped up in tight apartments.

Anne Horner from Maysles Cinema detailed the context of the film and some information about how the effects of polluted water can reach every one of us in spite of our distance from West Virginia, where the movie takes place. A cool breeze blows through and fills the air with a pleasant vibe. The din of voices hushes, but does not cease as the film begins. Young adults can be heard speaking of their jobs as artists, intellectuals, or professionals. Just a handful of patrons pay attention from the moment the film starts. 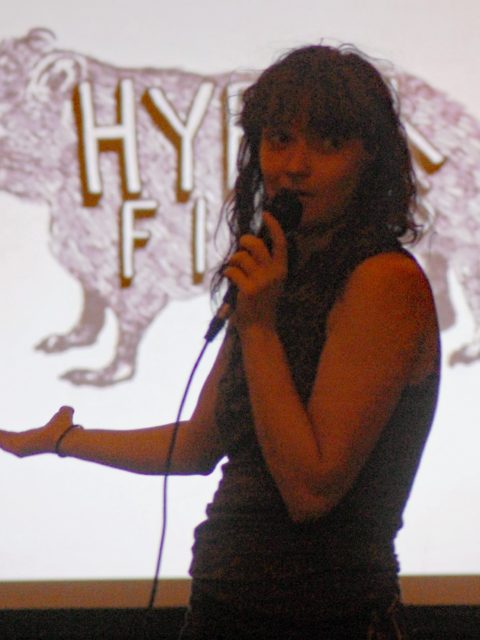 The story begins with a journalist, Cullen Hoback, visiting the affected area. He goes to a local home, to speak with individuals who live in “Chemical Valley,” a strip of 25 miles along the Kanawha River where many chemical companies are located. There is a quick scene of the journalist using the water to brush his teeth. Despite the serious tones of the intro, this is quite comical. News clips intersperse the journalist’s voice-over. Local officials speak to the environmental disaster. American Water was the company responsible for much of the alleged pollution,  and company officials refused to speak with Hoback.

The larger crowd at Nowadays congregates under the open sky, while the smaller group more interested in the film is seated under the canopy at picnic tables in the makeshift theater.

A clip from the film shows a government official saying the water is safe for use; a subsequent clip shows protestors outside of a government building claiming otherwise. The problem seems to focus on pregnant women and children — those who are most victimized. Many of the patriarchal individuals Hoback interviews are employees of chemical companies and coal mines, other polluters.

This presents a complicated relationship; the employees have no recourse against the company that both employs them and poisons them. If they were to take their claims to higher rungs on the political, legal or legislative ladders, the companies would likely let them go, leaving them jobless and unable to support their families. At the same time, without action, they and their families exposure to pollutants in their water will continue. One man solemnly describes his perspective to Cullen: “Nearly half the people in this trailer park have died of cancer.” The man is a coal miner, his father was a coal miner, and his grandfather, as well. This begs the question about people in those industries: How is one to survive when the only options are to be poisoned or going hungry? 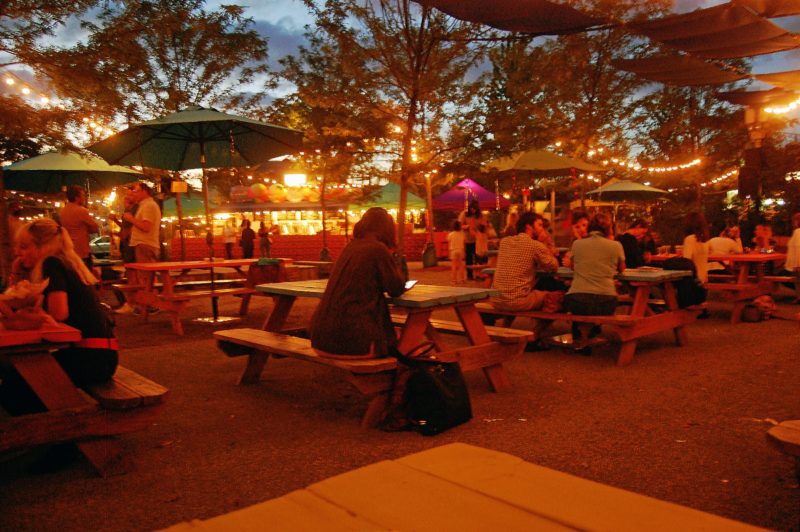 Under the sky at Nowadays, an alternate site for Maysles documentary screenings.

The film continues along the route of a typical exposé to show how large corporations harm the very citizens who work for them. In this case,  Government failed to follow procedures for dealing with the improper handling of chemicals. Those who were harmed nevertheless continued to fight from their underdog position. The documentary attempts to instill hope in the fight against pollution, but makes the viewer aware of very real difficulties in working to make change for the better when fighting the proverbial establishment.

The Maysles Documentary Cinema is located in Harlem at 343 Malcolm X Blvd in a small theater space. Maysles is a non-profit organization dedicated to the exhibition and production of documentary films that inspire dialogue and action. Through their cinema and educational programs, they engage diverse communities in creative self-expression, communicating ideas and advocating needs. Nowadays, a remote screening location for them, is located at 56-06 Cooper Avenue in Ridgewood, Queens.

Gregory Stewart is an intern with Ragazine.CC. He is a graduate student at The New School for Social Research in New York City. You can read more about him in “About Us.”