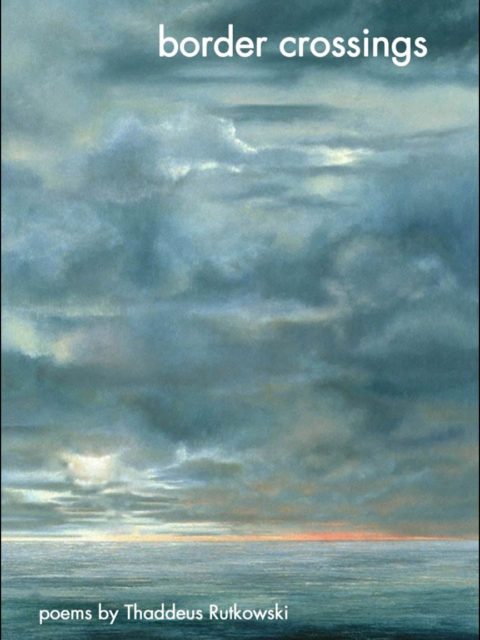 There is a poem called “Border Crossings” in a new book of the same name by Thaddeus Rutkowski. It’s a theme picked up in other verses in this volume (published by Sensitive Skin Books in Mill Valley, California), Rutkowski’s first full-length collection of poetry. So, someone new to his work might take these hints and decide borders is the book’s theme.

Although I believe this is off the mark, there is some truth to the idea. The title poem plays on the media-spread fear of criminal immigrants streaming into the United States. In Rutkowski’s poem, a group of (seeming) illegals is sneaking from a developed country into an undeveloped one. Although the countries aren’t specified, in my reading they could be sneaking from the United States into Mexico, where, as the “coyote” tell them, the toilet in their new land

will be a hole in the floor,
and you will have to squat over it,
and there won’t be any toilet paper in sight.

Like other poems in the book, this one turns on a simple incident – here, perhaps, the author’s family visiting another country. The event is given a wryly imaginative twist, rendered in a short lyric that uses pithy, precise language. Unlike this piece, most of the poems involve even less deviation from reality: a hawk flies past a window, the hero walks past the Pantheon monument in Paris at night, but everything is seen by the narrator from an untoward, unexpected angle.

However, to continue with my first point, if you are familiar with Rutkowski’s other writings, which up to now have been prose fiction (short stories and novels), you might take this book’s title to refer to this way of looking at the poems: They were brief passages that were refused entry in the novels so ended up in the poems. They border-crossed from prose to poetry.

I’m putting that metaphorically, but let me explain. Rutkowski’s most recent work, Guess and Check, is a powerful, coherent narrative about a young man growing up in a mixed-race family in a somewhat intolerant, rural Pennsylvania community. He goes to college and later marries, the author crafting a fascinating tale of his travails and triumphs. Now mark this. The story does not form an uninterrupted sequence of connected events but is composed of a series of five- to ten-paragraph short takes, each describing a single life incident. And many of these fragments work in the way the poetry does. They revolve around one incident, which, when opened up, shows a wealth of surprising aspects. The poems, by contrast, show a single aspect, but involve the same dynamism.

I have not had the privilege to enter Rutkowski’s workshop, but it’s as if, while writing a novel or a creative memoir, a glancing, brief idea occurred to him, one that didn’t fit the pattern of the narrative but that could be embodied perfectly in a poem.

For instance, in Guess and Check, he describes the hero living in an apartment building and beginning every workday by going to the basement to retrieve his bike. Along these lines, in a gem of a poem, he describes:

I find a fish hook …
It’s on the basement floor
next to a feather,
below a ventilation duct
on which a pair of pigeons brood.
One of them
probably found this bauble
and brought it home for the nest
to display like found art,
an object pleasing to the eye …
but serving no real purpose
in the life of a bird.

In another poem, the basement is flooded; even the garbage stored there is soaked. And then in another, the hero finds a homeless person collecting bottles down below. Could these bits of verse have been scratched down when the writer was developing a longer basement scene for Guess and Check?

Don’t take me wrong. Poets all have different ways of accessing material, and if the yield is works of the unstinting freshness, the keen observation, and – if I may mention a quality almost totally lacking in American poetry of the last 30 years – the sparkling humor found in Rutkowski’s new volume, you won’t see me complaining at how he arrived at creating them.

You can find the book here: https://sensitiveskinmagazine.com/books/border-crossings/