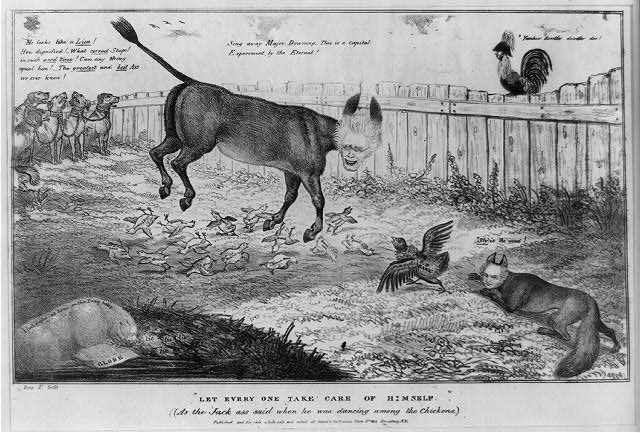 From the Library of Congress collections.

Sides of the times

hat a crazy time. It’s too often that I’m feeling sick to my stomach, nauseous while listening to and watching the circus that has become our Congress. Men and women from our lumbering two-party system developing partisan strategies under some sketchy frame of political righteousness, unabashedly struggling for power, for a vote, for money while using social concerns as their cross. Then there is the presidency, an office seemingly lost in its own ego-driven translation of public good and profit. Shame on the sham!

And outside the halls of this sad-clown mimic of governance there remain the ever-existing problems related to racial and sexual bias, inequality, personal and public health and poverty amid prosperity. Consider that it’s been a half-century since the civil rights movement and the war on poverty and where are we? In the mix of all this it seems the public (who pays much of the tab for what is occurring) continues to live amid glass houses, being pushed to consider purity in what is actually an impure society. It’s depressing, confusing and anger-inducing as almost everyone seems to be looking for the biggest stone to throw at someone other than themselves.

In fact, there appears to be some form of grand delusion that has grown in relation to the country’s progress. In other words, and in examining what we have done in the past and continue to do in “advancing” our interests, are we who we profess to be? What human traits (consider greed, aggressiveness, selfishness) actually speak to our history and contemporary day-to-day behavior? And what type of system do we labor under (consider materialism, consumption and individual gain)? And how have its traits influenced our behavior? Could it be that what we are experiencing is a product of our own devices, that we are reaping what we’ve sown? Moreover, and particularly given that it hasn’t as yet happened, do we actually care to pursue this line of questioning – perhaps in fear of what we will find?

But then something else pops into the picture. It’s like the other side of an emotional coin that get’s flipped throughout the day. In short the essence of hope has now turned up. It brings with it the faith that the depressing, confusing and anger-inducing instances that we see before us are actually signs of teachable moments, moments that signify not any road to perdition but avenues toward a more balanced and better educated society.

Why can’t it be that the technologically adept people (especially the young) join their minds, power and control over social media to take better command over what they see in front of them? Why can’t it be that those who control the business of technology put their energy and money into initiatives that promote public good beyond profit? As a matter of fact, aren’t the #Me Too movement and the Parkland student group and the B-Corps concept ongoing examples of how to turn dissident voices into prominent action, of how to turn the old into the new?

But then another flip and the other side of the coin comes up.  After all this type thinking has a slippery slope. It implies that we have a public aware/educated enough to move in the direction suggested. It implies that the public will not rely on the same human and systemic behaviors that have diluted past efforts. Are these accurate implications?  In this sense it may well be that what some describe as the “deep state” will have its way. In other words, the depth of our current cultural and institutional instincts, so closely tied to the essence of vested/moneyed interests, may not allow for any real change to occur. They may in fact move the public, almost in a hypnotic way, in directions that serve to maintain the order of doing what is eventually good for some but not for all. This doubt also brings to mind that most of the public has been trained to move to solutions without really grasping the full extent of the problem – to think that fixes to our problems have to work at least by the end of an election cycle. And this type short-term thinking will have to stop, lest we continue to put band-aids on what are slow-healing, serious wounds.  This said another way change, legitimate change, demands establishing long range goals and commitments that speak to individual and social pain amid any gain. Is the public really up to this type challenge?

But then another flip and comes the other side. Aren’t we already experiencing the pain, aren’t we already on our way? For goodness sake, let’s not stop in mid-motion, let’s get on with what’s been started.  In recognizing our contemporary struggles within the context of the age-old battle between economic and social (wo)man let’s get to putting all the variables linked to this struggle on the table for public discussion. Let’s continue to find ways to bring legitimate civic dialogue back into favor, to rein in the hyperbole, to bring truth not to only to power but to logic. And let’s make it clear that this is not “pie in the sky” thinking – that it’s being patriotic, it’s taking the high road, it’s realizing that we can be (and have been) fools for lesser things, it’s choosing to err on the right side of the flip!

Well… much like the coin toss itself it’s difficult to predict what might come.  It is certain however that with whatever follows we will need all of our individual and collective strength; no one doubts this point. And in that light let’s hope that in the midst of the heads and tails of things that we can stay on the path of discussing, examining and understanding ourselves and our country – especially as the world continues on with flips of its own.

**Given the considerations noted above I couldn’t help but recall two pieces I wrote years ago. Despite their age they represent an expressive match for the emotional coin imagery, so I thought to share them accordingly. They are bit out of character for the “politics” section but, as it is with the Ragazine.cc spirit, all parts fit in regard to the sum.

Globalization
Religion
Yeah spread the word daddio
Is it really the devil’s world?
Morality boo
God damn it
Scared into believing
Whose meter should we put our money in?
I’m not happy
Fucking pitchfork
Now pitchman
Islamachristianbuddhajudeorama
To wit, dimwit
Witless for the prosecution
Swear to god
He did it, she did it
Reach out and touch someone
Rely on sentiment
Wave the flag
Don’t step out the door
Cell phones ringing, media stupor
Worthless information
Bar room opinions
Noise on noise
Disobedience, dissent
Terrorism
Evil,Good
Fat, void, almost impossible
We are not what we think
Not even in the pink
Hungry, waif like
Wandering through life’s soul
Is it them or is it us
Who’s zooming who daddio
Them and us
Warm, cold, clear, cloudy

There’s a garden just outside my window
Flowers blossom in their boxes
Small trees show their leafy souls
Children play in the park across the way
No menacing sounds, only screams of fun
A day that will last into the night
Others are about, walking, talking
Expressing, stretching, blooming
Free, fresh, friends
Under a sky of blue, with puffs of clouds
It’s hard to imagine the strife
How can beauty not win?