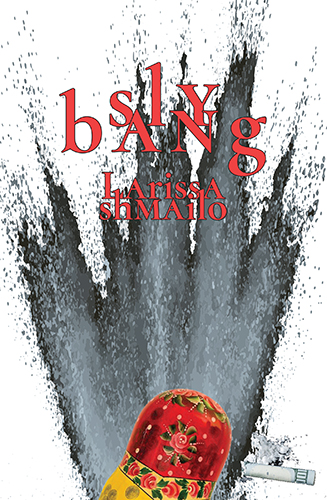 You knew this is what the world really looked like all along.

I have a problem with what is sometimes known as “experimental” writing. To my way of thinking if your writing is still an “experiment” you are saying you don’t know what’s going to happen here and have no control over anything. If doing automatic writing, that’s one thing. Hans Arp would be proud so long as you don’t sit down and edit the “genius of chance.” But unless you’re doing classic surrealism just throwing it out there to see what burns and what remains stone always fails. Always. In over forty years of this my advice is – do your experimenting in the laboratory. Don’t do it in public. Have the concept baked and ready before you release it onto the citizenry.

This is the very standard that made me fall for Sly Bang. Because that thing – a wild, idiosyncratic, frizzle-haired thing – is put before us fully formed. Guesses gone. Thing triumphant. In Sly Bang, Larissa Shmailo’s technical skills pop on every page. She is in control of this insanity from the start, and to prove it she floods us with new icons created one after another like stamped plastic ducks. She creates an assembly line of literary riches. Genres and forms bend in and out with ease.

Now hold on for one second right here. In the first place, what I’d really like to know is, how did Larissa Shmailo actually present the idea of Sly Bang to a publisher? As a writer myself, I have enough trouble fitting things into a digestible capsule meant as an explanation to a stranger who wasn’t there when all the work was going down, sweat and all. It would seem impossible to summarize this book into a typical 150-word synopsis that fits the standard query form.

What? Dear Editor, in Sly Bang Nora is conducting an investigation under the auspices of a very high-level intelligence agency heretofore unconvincingly named. Probably. You may think she’s dead by page 50 or thereabouts but not so fast. And it may sound, for a moment as if she only exists as a mutual experience shared by a wild array of characters who help her or try to stand in her way, depending. You see, once in a while Nora’s thoughts become visible holograms that drift through the room. Time warps between the now and the past to the maybe-never-happened at all for her. Nora talks with and interchanges between herself and her “alters” – alter egos that range from the insensible to the predatory.

I would have no clue on how to write a query for Sly Bang. All I know is I have never read anything like it, and never stopped being carried along by its peculiar madness, my head full of pictures, my ears full of voices.

“Michael regresses, or un-regresses, and becomes a danger to Nora again. Nora is too old to breed using even the most interstellar ovarian technologies…”

In looking over the book while rewriting this review I am, however, quite sure I fully understand how Sly Bang came to be. I wasn’t there when it happened but, having studied Nora’s detectivizing techniques I can trace it back.

First, Shmailo ate the world. The eating helped her soak up every aspect of the popular culture, every nuance and sham of the American Empire. Then, she chewed it all up. This is important. Because Jackson Pollock did the same thing with the visual. Check it. Pollock ate the world and spat it back out again in all kinds of wild colors and shapes. Shmailo did the same, but with words. So, if you look for details, you lose the “Bang.” If you step back, you get it. Other than this I can’t do the standard “this book is like that book.” Or “this work is similar to this author’s oeuvre.” It can’t be done.

Enough speculation. Let’s simplify. Sly Bang is a book about a detective / agent / victim / lover / investigator / spy / psychic target named Nora. How much Larissa Shmailo is one of Nora’s “alters” is a matter of conjecture. Best left to biographers, or the ponderings of those who make picklocks out of metaphors.

“She distracts Ouspensky. She praises his derivative poetry. She writes poetry to him in French and Russian. She flatters him and draws him out to learn his plans, a Scheherazade now, and keeps him from the cavern and its barbaric rituals and her children.”

It’s a simple formula, really. Nora is what a female James Bond trapped in a harsher dystopian version of Blade Runner would be, only six times as promiscuous, with a handful of different personalities who pop up from time to time at the worst times, a serial killer for a sidekick, born of a family that had to pick between Hitler and Stalin, and very susceptible to obvious persuasion when under the influence of that serum she was warned about but allowed them to give to her anyway because a little sweet talk got right through her armor just like it would for anybody else. In the meantime, we slip in and out of realities, personas, get transported from prose to poetry without the need for a bridge until what we discover is a form that has no precedent I can think of.

There will be readers wanting the linear, formulaic prose (there are always such creatures lurking about, just like those who want to destroy and deny our Nora). There will be readers who will be completely thrown off the scent. Too bad they will lose the trail, because here’s the secret;

What Larissa Shmailo is recording here is exactly how the brain works. Shards and bits of memory-pictures. Images flowing into one another like REM sleep but without ever admitting to the dream. And yet? In the heart of it – or perhaps near the spleen of it – there comes a subjective cohesion that tells a story about an agent for good with a penchant for bad in a world of sunlight, gray areas, and things that are just downright disgusting.

If you are used to writers who talk down to or dumb it down for you, you will probably hate this book. If you like writing where the author figures you are in on the same joke because you live in the same world, you’re ready.

Sly Bang is “Rollerball” on a mixture of cocaine and acid. A sex binge that eats men alive.  It’s the parts of “The Matrix” they had to edit out because it was just too much to take. Once you check in you will be half way through before you realize what you’re doing. Because for all its twisted logic and refusal to adhere to any known rules, Sly Bang is a world you already know is there.

Even if you had no idea that’s what it sounded like before you started.

RW Spryszak‘s work has appeared in numerous alternative journals since the 1980s. He is Managing Editor at Thrice Fiction Magazine. His novel, Edju (https://www.amazon.com/Edju-RW-Spryszak/dp/1947980890), was released in September of 2018. 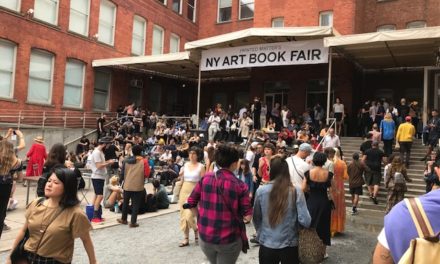