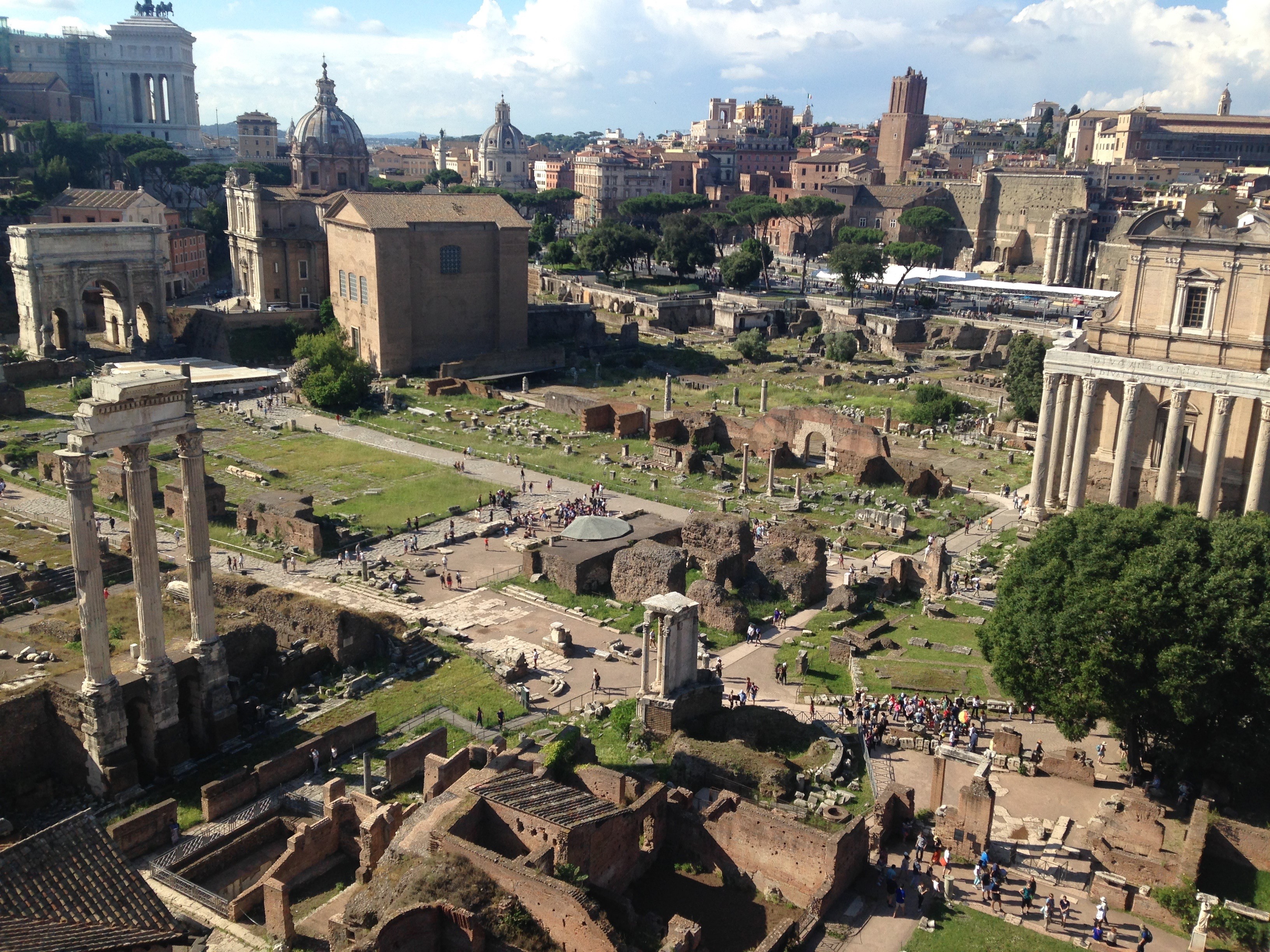 Sinkholes in the Cobblestone:

What Lucia Berlin Taught Me about Rome

I had been in Rome for about a week when the sanitation workers went on strike. I noticed something was off as I walked through Trastevere: an ancient, labyrinthine neighborhood known for its charming cafes, cathedrals, and cobblestone streets. One morning, I found soggy boxes of trash heaped up on the curbside. Banana peels and lettuce rotting on the street. Glass bottles. Seagulls and pigeons spiraled overhead, competing for tidbits. Someone was partying last night, I thought. But throughout the city, the dumpsters overflowed and dairy products slow-cooked in the sunlight.

Not exactly what I had envisioned when I made plans to study in Rome last June.

I travelled to Rome to take fiction-writing courses at John Cabot University as part of an American University study abroad program led by Professor David Keplinger. John Cabot, an American liberal arts school, is located in Trastevere, a neighborhood the Romans wrested from the Etruscans sometime between 753 and 509 BC. It means “beyond the Tiber” and indeed, the best way to get there from the historical center is to cross a bridge over the Tiber River.

At the height of the Roman Empire, Trastevere was home to fisherman and immigrants. Cleopatra is believed to have stayed there when she first came to Rome circa 45 BC. Always an eclectic neighborhood, Trastevere attracted hippies, political radicals, artists and musicians in the ’70s. Today it’s riddled with bars—such as the famously cheap Bar San Calisto—American universities, prosciutterias, and an excellent vintage shop called Frankenstein. 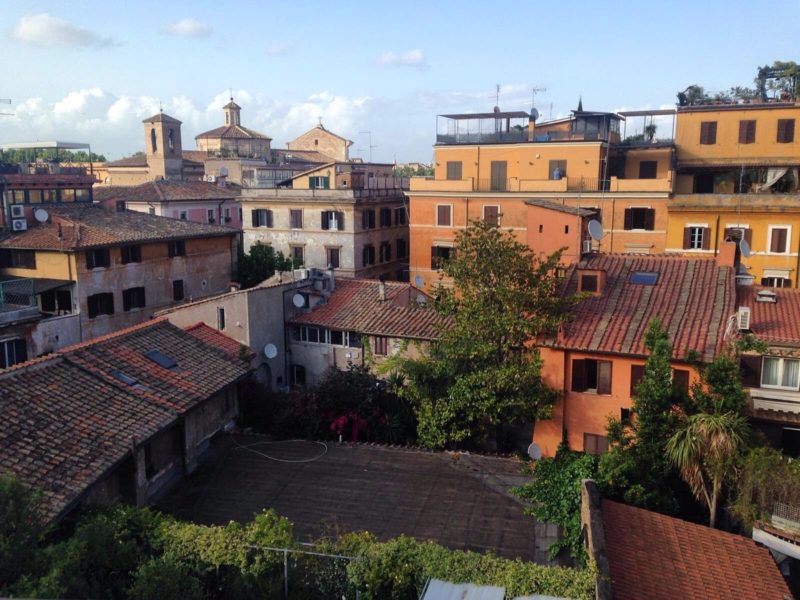 A view of Rome’s Trastevere neighborhood from a terrace balcony. Trastevere is an alcove for artists, students, activists, and many tourists.

With its sun-drenched terraces, English language bookstores and weekly open mic nights, Trastevere is an ideal and welcoming neighborhood for local and foreign writers. At John Cabot, I studied literature with Elizabeth Geoghegan, an American writer and essayist who’s lived in Rome for the past 17 years. Geoghegan is the author of “Natural Disasters: Stories,” and “The Marco Chronicles: To Rome Without Love.” The latter is a sort of anti-“Eat, Pray, Love”: a non-fiction account of the author’s misadventures in dating the Latin locals. “Rome has always been, and remains, a labyrinth of complex social mores,” Geoghegan writes in “The Marco Chronicles”, “…indiscriminate etiquette, street-side histrionics, and daily indignities set against the backdrop of the city’s enduring ancient relics, all a timeless testament to her magnificence. That bitch.”

Geoghegan’s tale is laced with dark, deadpan humor as she calls the dream of La Dulce Vita what it really is—a chimera. In the “The Marco Chronicles” Geoghegan challenges us to recognize and accept the real Rome—in all its messiness—not the American fantasy of food and romance. While I wasn’t expecting Giovanni from “Eat, Pray, Love” to roll up in a Ferrari (more like scooter—the scooters are pretty cool), I did associate the Eternal City with art and wine. And maybe a scoop of pistachio gelato.

“I’m tired of reading about cobblestone and gelato,” Geoghegan said, as class started one morning. It was still cool out, and she wore a dark leather jacket I coveted, along with chunky, platform sandals. “If you’re going to write about Rome, write about the seagulls and the trash.”

In other words—I inferred—write what you see. Pay attention.

Geoghegan says she owes a lot to her mentor, Lucia Berlin.

Though she passed away in 2004, Berlin is everywhere. A collection of her short stories, “A Manuel for Cleaning Women”—now available in paperback—made it to the New York Times Best Seller list last year. The Paris Review, The New Yorker, and Vanity Fair have recently published features about her life and her work. Usually, photographs of the author accompany the articles: a young woman with a playful smile, soft features, and piercing eyes like Elizabeth Taylor. In some photos she clutches a fishing rod, in others, a cigarette.

Berlin was born in 1936, in Juneau, Alaska. Her father was a mining engineer, and his career took the family to Santiago, Chile, where Berlin spent most of her childhood. There, her family enjoyed newfound wealth, and Berlin grew up attending balls and socials with high society. Prince Ali Kahn lit her first cigarette.

Despite her seemingly glamorous upbringing, Berlin lived a messy life. Her mother was an alcoholic; likewise, Berlin struggled with alcoholism throughout much of her adulthood. By the age of 32, she had divorced three times and had four children. She began publishing short stories when she was 24, but did not write with regularity until later in life. In the meantime she worked a number of jobs: physician’s assistant, phone operator, high school teacher, and cleaning woman.

Berlin became sober in the mid-’80s and began to publish collections of short stories. She taught writing workshops, and maintained correspondence with authors like Lydia Davis. She began teaching at Boulder University in 1994, where Geoghegan was her student.

“What I learned from her was the importance of voice,” said Geoghegan. “If you get the voice right, you can do anything you please in a story. She never subscribed to any of the so-called rules of writing fiction.”

I could hear Berlin’s voice in her short story, “Angel’s Laundromat,” which she begins with: “A tall old Indian in faded Levi’s and a fine Zuni belt.” Not a complete sentence, but one I delighted and obsessed over. It makes you think the first part of the sentence is cut off so that the story begins in the middle of a thought or conversation.
“Angel’s Laundromat” takes place in late 1960s Albuquerque, New Mexico.  The backdrop is of course, a Laundromat, and I find this is an interesting setting for a story. At Laundromats, your under things are all on display for people you don’t know and probably won’t ever talk to. Unintended acts of intimacy in public places. Berlin writes in “Angel’s Laundromat”, “Towels, pink shortie nighties, bikini underpants that say Thursday. Their husbands wear blue overalls with names in script on the pockets. I like to wait and see the names appear in the mirror vision of the dryers. Tina, Corky, Junior.”

“A Manual For Cleaning Women” is now available in Italian and Berlin’s work is becoming popular in Rome. This summer, Geoghegan spoke at a tribute to Berlin at John Cabot University. Geoghegan also talked about her relationship with Berlin in an interview with RAI Letteratura, an Italian television program.

I wondered why Berlin, an American author, was becoming popular in Italy. Perhaps it’s because she wrote beautiful stories about imperfect but very human things. Clandestine abortion clinics in Mexico. Winos in 1970s San Francisco. Long nights with characters longing for something more than an electric blanket to keep them company.

What would Berlin make of Rome today? What would have captured her attention?

“While I can’t really say what aspect of Rome she might have captured, I think that, as with the Mexico City or Manhattan, or Paris of her stories, for Lucia, Rome, too would have been a series of impressions intertwining the city’s splendor and squalor seamlessly, likely also populated with characters the rest of us would have brushed past on the street, but who she’d have noticed,” Geoghegan said.

She might have done with Rome what she did with a Mexican border town in her short story, “Tiger Bites”: “We came to the bridge and the smell of Mexico. Smoke and chili and beer. Carnations and candles and kerosene. Oranges and Delicados and urine. I buzzed the window down and hung my head out, glad to be home. Church bells, ranchera music, bebop jazz, mambos. Christmas carols from the tourist shops. Rattling exhaust pipes, honkings, drunken American soldiers from Fort Bliss…”

There’s a cadence to her sentences. But beyond the rhythm of the descriptions, her language is precise.

So, I paid attention. One day, as I crossed the Sant’Angelo Bridge, in the presence of centuries-old Bernini statues, I saw a tremendous seagull swoop down and land on the handrail. A tourist—an American—approached the seagull and fed it a protein bar. I told myself to write about that later. Include it in a scene. Lucia Berlin was rubbing off on me. 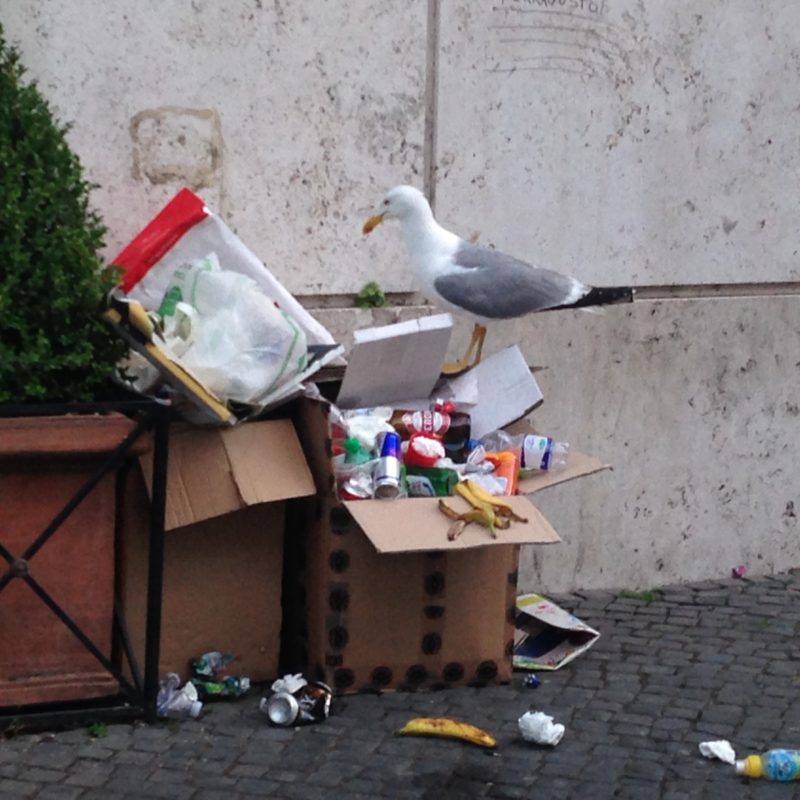 A seagull scavenges for morsels in the Vatican City following a sanitation workers’ strike. Romans blame the trash on government corruption.

I thought about Berlin as the sanitation workers went on strike on and off throughout the month of June. Her work begged me to pay attention, to ask questions.

My Roman classmates blamed the trash on the government corruption. For years, organized crime syndicates had been managing the contracts for sanitation services—primarily as a cover. Under mafia groups, the sanitation workers were well paid (or perhaps better paid than they are now) and could clock in at their leisure. Over the past year, the municipal government has been working to replace the corrupt contracts with legitimate ones. Virginia Raggi, Rome’s recently elected first woman mayor, promises to clean up the mess. In the meantime, garbage will continue to be an essential part of the Roman milieu.

Yet, Rome remains Rome. Over 10 million tourists visit the Eternal City each year. There is a vibrant international literary community with readings at the Coliseum and at the local universities.

Back in the 1800s, the Eternal City attracted Romantic Era writers like John Keats and Percy Bysshe Shelley. When Keats developed tuberculosis in 1820, he traveled to Rome to convalesce. His former home, overlooking the fountains of the Spanish Steps, is now the Keats-Shelley House museum. His bedroom is very much the way he left it. The ceiling above his bed still covered by the same painted white flowers. Those flowers were the last thing Keats ever saw. A sweet, sad energy lingers in that room.

Keats and Shelley are buried at the Protestant Cemetery in the Testaccio. Keats enthusiasts know that the epitaph on his grave reads, “Here lies One Whose Name was writ in Water.” But as Michelle Stacey points out in The Paris Review, those words were written by Shelley and Joseph Severn, who were angry at losing their friend too soon.

In her article, Stacey argues that Keats would have probably preferred his own words:  “I have left no immortal work behind me—nothing to make my friends proud of my memory—but I have lov’d the principle of beauty in all things, and if I had had time I would have made myself remember’d.”

The principle of beauty in all things. I think that’s what Berlin might have been getting at.

Right before I left, a sinkhole opened in the cobblestone street near school. Water burbled through it. People walked around it and I stopped to take a picture. 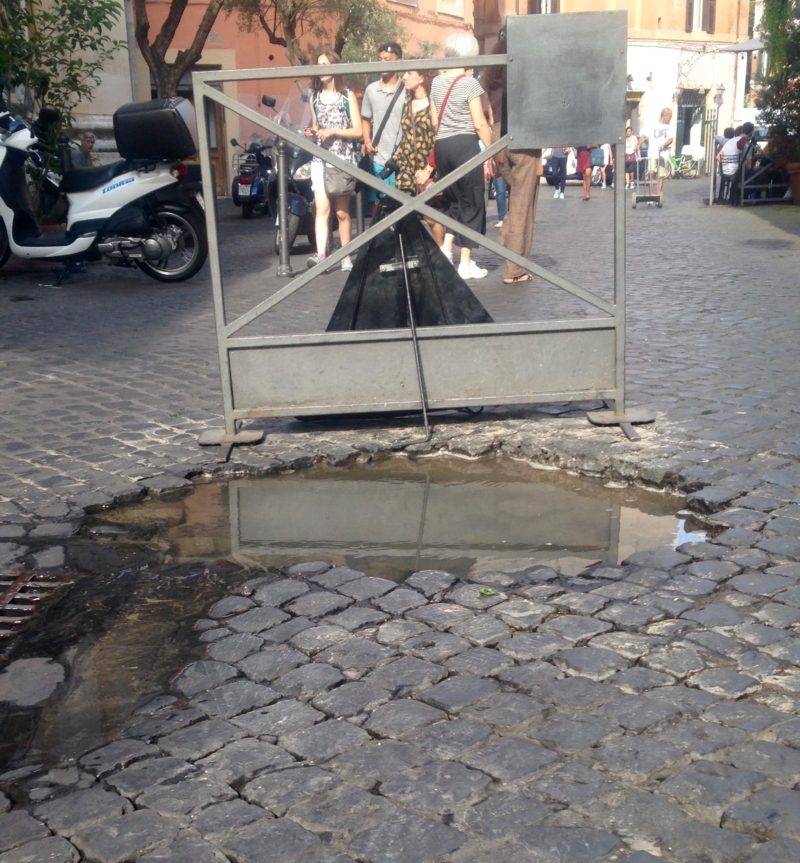 Pedestrians sidestep a sinkhole in Rome’s Trastevere neighborhood. Rome’s streets are built upon ancient quarries, leaving the city vulnerable to sinkholes and damage.

Lauren Johnson is a DC-based writer and independent journalist. She’s a third year MFA candidate in creative writing at American University, and an Emerson College alumni. Her writing has appeared in Cafemfa.com, Playbill.com, Earth Island Journal blog, and the Boston Globe. She’s at work on her first novella, which she describes as a “gothic fairytale.”