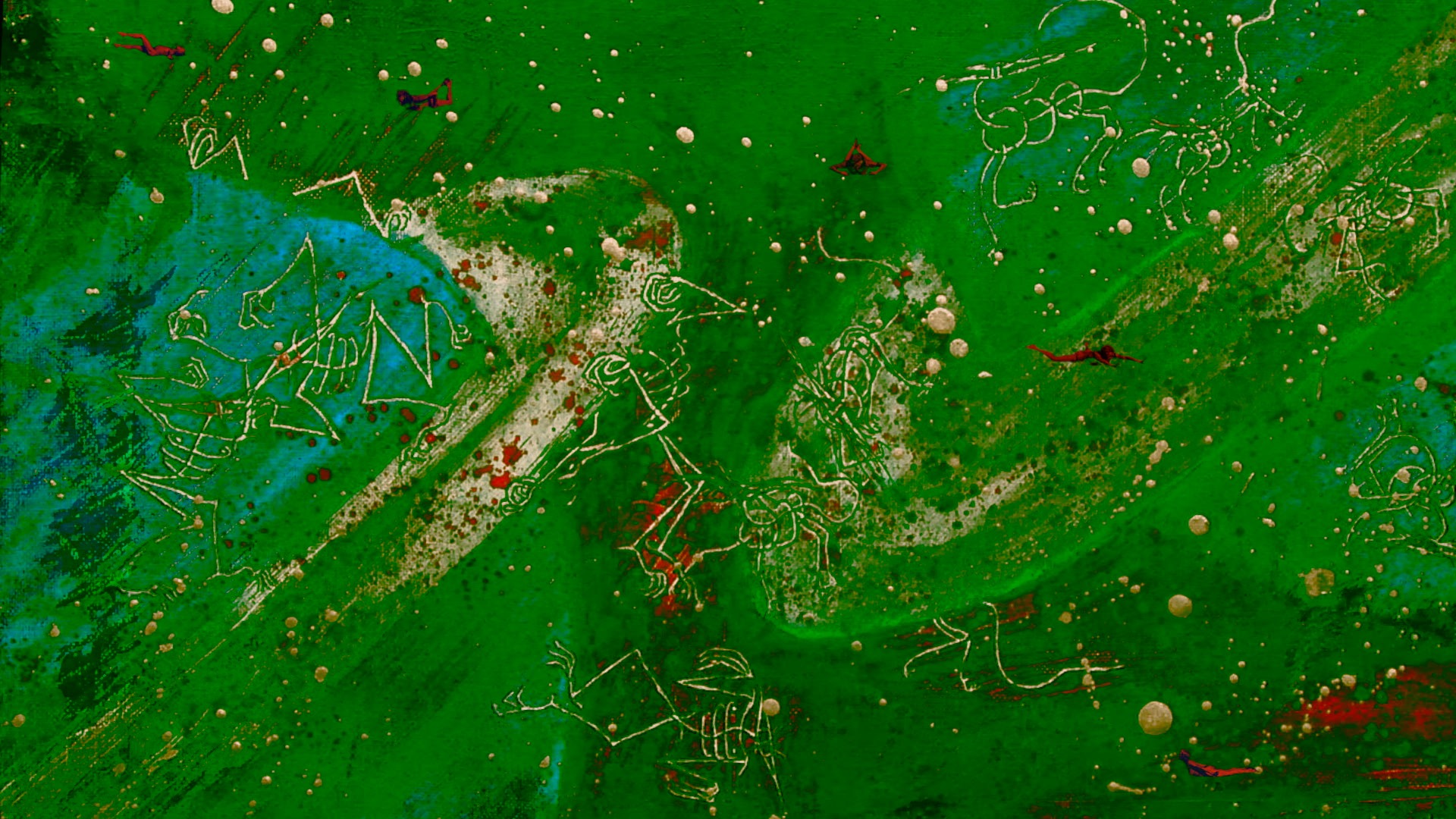 Still from the video, Route 4

The Strange and Good Vibrations

Ragazine: You’ve had a varied and colorful background with a focus on dance from the time you were a child in California. Was dance something that welled out of you, or were your parents enthusiasts who nurtured a predilection?

Lucy Nell Stewart : I was drawing and sculpting before I was dancing actually. I always love to dance. My parents never pushed me into it. Mom was an amateur Spanish dancer. She did shows at schools for kids and showed us heelwork and castanets in the living room. We kids played a lot of music and danced in the living room when we could. The 1960s provided irresistible music to sing and dance to. My ballet career was short. I was not a happy camper in that world and neither were my knees.  I actually tried to be a race rider(jockey) in the middle of my dance career and found that was not it. My theater years were more fun at times but still kind of a drag. I became entirely overwhelmed by life, and nearly destroyed myself. Eventually I realized I needed to create my own space. This is now my world of multimedia audiovisual works.

R: Where in California did you grow up? 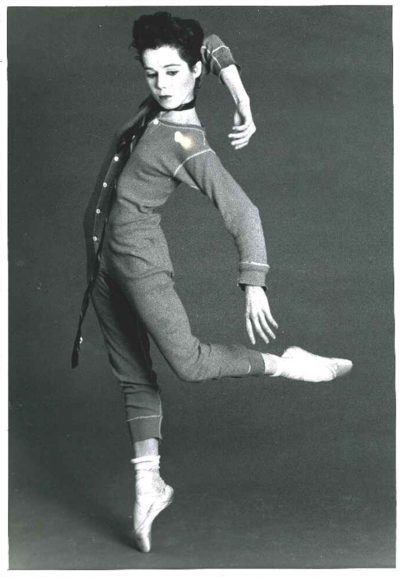 Lucy Nell Stewart during her days as a dancer.

R: Do you remember what it was like going on stage in front of huge audiences as a professional as a child or young woman?

LNS: I love the excitement of performing on stage very much. I miss it. I started very young so it seemed natural. It was probably a great way to get more attention than I got as the last of a litter of five. At two years old I attempted to lift a couch for attention and ended up with an inguinal hernia.

R: How did you happen to get to NYC to work and study?

LNS: I won summer scholarships with American Ballet Theater at twelve, thirteen, fourteen  years old. I was actually walking around Central Park by myself in our breaks in the early 1970s! They wanted me to stay for the winter high school years but training and school was better at home.

R: Did you have a teacher/mentor who helped you “most”?

LNS: I met Aboriginal elder Edwin”Guboo” Ted Thomas in my mid-twenties at my mom’s house and he showed me how to talk to rocks and sing with bees. This is a very important part of who I am today.

R: What prompted you to move into film and video? Was it the medium itself, or the medium’s ability to allow you to capture what you express as a dancer-performer?

LNS: In the process of creating my one woman shows I wanted someone to record them but could not find anyone to actually listen to me or show up for rehearsals to see what I was doing. Film classes led me to freedom and video eventually led me to more freedoms to be the experimental test helmsperson I truly am.

R: In your videos, you display a childlike exuberance, a playfulness reflecting delight in being alive, as a five-year-old running through a field, or a 13-year-old opening a birthday present containing exactly what she wanted. In counterpoint, do you also experience menacing thoughts and if so, how do you capture them? Or are your videos your way of fending off noir?

LNS: Good and bad are the fronts and backs of each other. One cannot exist without the other.

R: I am loving ROUTE 4, which, if we’re talking about the same Route 4 in New Jersey, I’ve driven many times and found myself moving along at a snail’s pace, about as fast as one can move through traffic. And there you are swimming amongst skeletons and what appear to me to be constellations… and the cacophony of traffic. How did this piece come about, and how far off base am I with my observations…?

LNS: I prefer for you to have your own experience with my art.
I am loving you loving “ROUTE 4”.

R: Some of your work reminds me of Luis Bunuel’s ants coming out of the palm of a hand… How much have you been influenced by the Surrealists?

LNS: Surrealism and Theater Of The Absurd are a huge pleasure for me.

R: Who are your favorite dancers? Dance Companies? Why?

All of the totality of the Multiverse dances brilliantly.

R: When did you move out of NYC?

R: The Delaware Water Gap is a beautiful, scenic area that people usually just pass through on Route 80 or stop nearby for the shopping mall. How did you happen to find a home there?

LNS: I wasn’t aware of a mall.

I saw a picture of a place on a wall outside a building in the East Village . I was desperate to escape, and it felt like a good idea. There were loads of heavenly crawling and hopping and flying creatures in the area so I knew it was for me indeed!

R: Have you climbed or hiked the trails in the area? Fly fished the Delaware?

LNS: I swim in the Delaware and the trails are magical. Be aware of hunters.

R: What were some of the more influential experiences you had that helped shape your life and guide you in your work?

LNS: My father was a sailor. He took us out on the ocean instead of going to church. 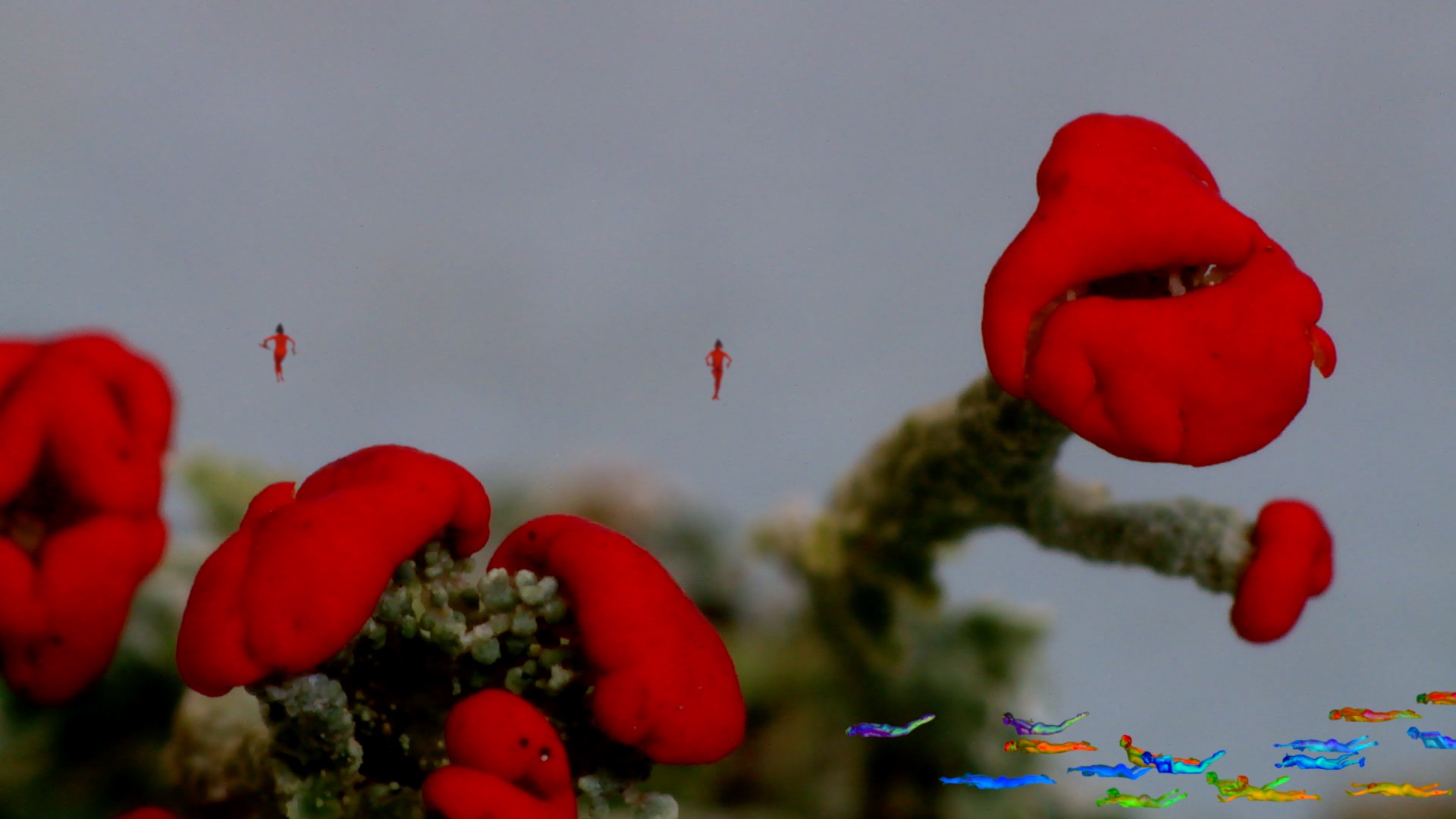 R: What is your next project?

LNS: I have more “ROUTE’s” ahead and anything else that decides to happen. I had a nightmare that wanted to be a project but as I started to draw a layer of it I became frightfully ill. I am not sure about that project. Very dark and bloody, and as a lucid dreamer I could smell the guts. I am a bit obsessed about the images. I feel it may want to be sculpted instead of drawn on the base level.

R: Do you still travel much for performances? What’s the itinerary for the rest of this year?

LNS: I don’t really think of myself as a performer anymore. I set up my camera and go in front of it somehow. Whatever that moment offered will be some part of the collage. It is always a surprise. The close-up work is almost impossible with the mind of the insect or spider or slug or wasp or whoever is available then, and the size of the reconstructed camera with the macro lens. There is a clownish element, I suspect.

I exhibit my art in NYC a few times a year. There are some other places I would like to exhibit.

R: What would you say to young dancers getting into the profession today?

LNS: I will say to everyone what my dear old friend Harry Johnson said to me: “Opinions are like assholes, everybody’s got one.”

R: What do you use to shoot your videos? Any special equipment required?

I used HDV, (and a 4x adapter for macro) for most of my earlier body of work.

R: What do you use in your editing process? Any preferred editing programs?

LNS: I have been with Final cut Pro since it started. When Apple stopped and redesigned at FCP 7, I almost migrated but ended up adapting to FCPX. I am happy I did. There are so  many  different reasons to choose an editing system.

R: What is involved with your “process,” once you’ve come up with an idea?

LNS: Stay out of the way of what it wants to be. Let it come out of nowhere freely.

R: Where do all the seemingly disparate influences come from? I see mirrors, bugs, bodies….

LNS: I looked at the synonyms for DISPARATE and I found a familiar word: nonidentical. I am the ten-minute younger non-identical twin of my sister Sally. Maybe there is something there? Otherwise I’m not sure I understand the word disparate.

R: Do you also paint? Draw? Do you choreograph/score on paper before “taping”?

LNS: I vibrate in many different ways. I think most of my artwork takes place in the editing process.

I don’t choreograph anything.  I experience my work as a collage of movement and sound. The movement is inspired by the other components or vice verse. The soundtrack is usually inspired from the visuals. I like to let things happen spontaneously.

It would not be as fun if things were planned.

To view other works visit lucynellstewart.com

Mike Foldes is founder and managing editor of Ragazine.CC. You can read more about him in “About Us.”