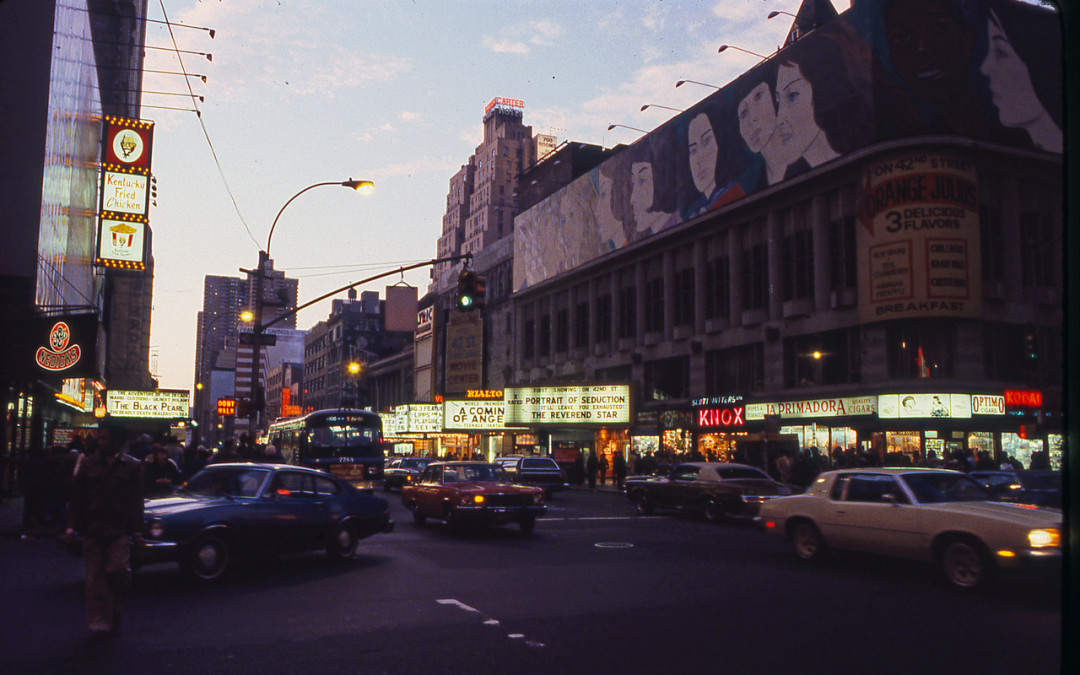 Ragazine.CC: You are actively engaged in the Real Estate business, which at first seems to be a contradiction, given the nature of the Real Estate industry in NYC and the subject of much of your photography. Your compositions treat your subjects – the City – with affection and respect, those images of bygone eras creating a longing for the good old, bad old days some still remember. How do you reconcile those two sides of the coin? 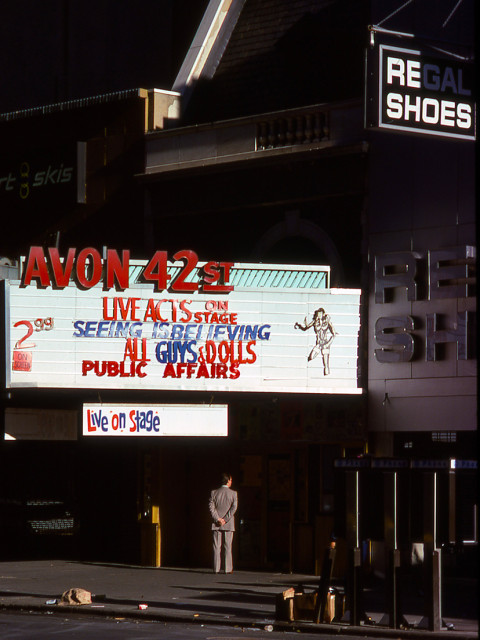 Maggie Hopp:  There has always been the dichotomy, or as you put it, a  ‘contradiction,’ between ‘preservation versus progress’ with regard to ‘ways of life’ as well as ‘bricks and mortar’ and there is certainly controversy about what is worth hanging onto and what can be discarded. This is often the concept or underlying thought behind much of my photographic undertakings: to preserve something visually as there is the realization that it won’t last (a way of life, and/or bricks and mortar) or be here forever!

Leaving my City Hall job with the Lindsay administration in the late 1960s, I pursued my passions, not only for photography and an artist’s life, but endeavored to see the world. I roamed Colombia for more than a year making documentary black and white images for the U.S. Peace Corps and moved to Scotland, England, Ibiza, and then India and Nepal making photographs all the while (“Slowly Down the Ganges,” ‘Women at Work’) and then I seriously began to think in terms of what the next stage might be for me.  Clearly, I needed to come ‘home’ and find my way as a professional photographer in NYC: This early work garnered other assignments and a career as a personal editorial documentary photographer was born.

In the late 1970s, in NYC, I was fortunate to find a patron and mentor in a far-sighted, deep-pocketed, gentlemanly, low-key, developer – a major player and master of NYC real estate who understood where progress would naturally take place, though he also had a preservationist’s eye.  It was he who insisted I take classes and sponsored me for a real estate brokerage license.

Together, he and I discussed the neighborhoods slated for change which were of interest to him, and then I would photograph every block so he could see what was there without having to be out on the street telegraphing his interest (driving up the price of the property, perhaps, by his presence!). He was, of course, more interested in determining which properties to buy, assemble and hold for long-term development, but I treated this pursuit as an opportunity to make a ‘photographic documentary art project’ and made a concentrated effort to find the best light, to be thorough, and to photograph every block and therefore to show which were the sites ripe for change and development ( e.g. parking lots, taxpayers, one story warehouses, etc.),  recognizing the inevitability of change and that my images were a way of preserving the city at least visually!

Additionally, The United Nations Development Program was interested in my prior work in the “third world.” Dominica was a small Caribbean nation I had visited and photographed in the ‘60s and U.N.D.P. commissioned me to return there at the time of their Independence from Great Britain in 1978, and again in 1988. “Women at Work,” “Dominica at Independence,” and “The Banana Story”  portfolios made there resulted in several exhibitions, published articles, and an invitation to lecture at Princeton’s Women Studies Program.

In 1983-84, I went back to Asia under contract with CARE, United Nations Fund for Population Activities, and U.N.D.P. to photograph their ‘development’ projects and added to my collections of images (“Women at Work,” “Men and Boats,” etc.)  I was able to accept the meagre remuneration offered by these large, but poor, not-for-profit organizations by supplementing my income with a commission from a real estate transaction now and then.

Q: How long have you lived in New York?

A: My family moved here when I was 11 years old and after attending Bard College I returned to the City and luckily found a rent-controlled apartment in Greenwich Village.  I was able to travel and return to this small affordable apartment in between my journeys. It was sort of like having an “arts grant.”  I have always, thus far, maintained a residence in NYC.

Q: How did you come to be a photographer? Was it a passion, or a pastime that turned into something more?

A:  Oil Painting classes on Saturday mornings with Charles Seleger, an artist who supplemented his income by teaching youngsters privately in his studio, was my introduction to visual imagery.  Before switching my major to Psychology, I began as a painting major and discovered photography!  Bard had ‘field period’ in winter (too cold to pay for heating the college so we were given three months off in which to find employment ), and I worked summers as well.   I found paying jobs at Time/Life; in 1965 I was handed a Contax camera and accompanied a Life Magazine photographer backstage at Shea Stadium at the Beatles Concert and later accompanied writers on assignment; New Orleans for Mardi Gras, Daytona Beach for the Daytona 500 Race Car event, injured college football players losing their scholarships, and so on, all of which further intrigued me – and ignited the passion, if you will, for making photographs.

All photos by Maggie Hopp, used with permission.

Q: Are you still shooting, and if so, with what camera? Do you have a favorite?

A: Still shooting but not as conceptually. My style is a lot looser than before.  I am not particularly interested in the bells and whistles of the new digital technology which has made everyone think they are able to make photographs with ease. It still takes an “eye” to consistently make that one picture that tells the “story” and succeeds on every level.  I think you can use any kind of camera and within its particular limitations and parameters, endeavor to make an image that works.

Q: What is your plan for the archive you’ve created over the years? 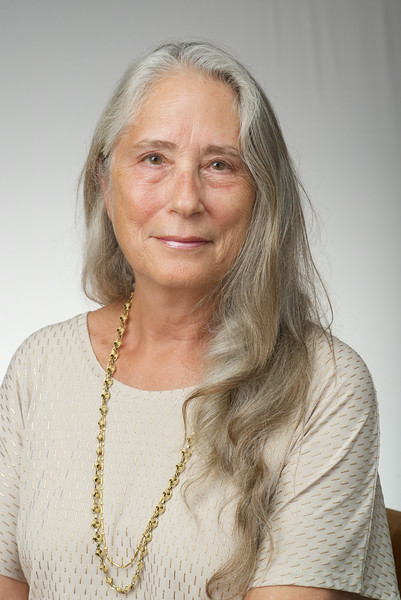 A: There has been a professional appraisal done of just the NYC Archive and it is highly valued. I am looking to find an institutional buyer for this beautifully preserved and archived work:  Ideally, a local museum or historical society should have it but so far The Museum of the City of New York not only has no money for a purchase, but are so disorganized that they cannot even accept this work as a donation (a tax write-off for me, perhaps) even though it fleshes out their particular collection. Perhaps someone reading this article will have a viable suggestion.

Q: Where did you live before coming to NYC, and if you were to leave, where would you go?

A: I was born in Poughkeepsie, New York, did a bit of time in Westchester and then my parents bought and renovated a brownstone townhouse on 18th Street and Second Avenue.  Having lived and visited a lot of places in the world, I have determined that I want to stay living in the States in my reclining years. If I should leave NYC for extended periods, it might be to go to Florida in winter, or Newport in summer, but will hope to always maintain a residence here.

Q: What’s next for Maggie Hopp Photographer? Do you have a show coming up? A book in the works?

A: I am working on a photo based Memoir.  There is supposed to be a postcard book published of my Dominica photographs.

Q: Is there anything you would like to add? 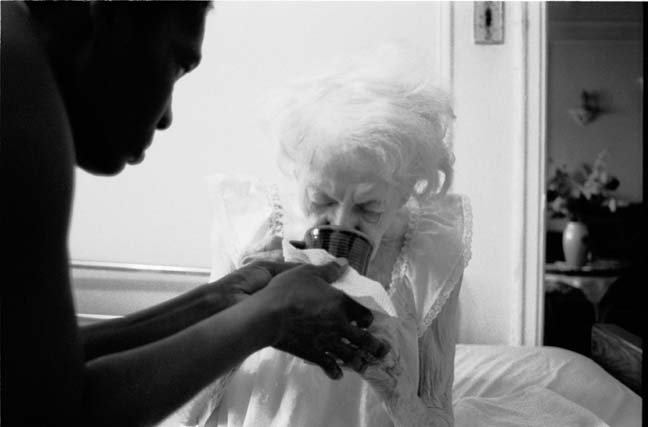 Great Aunt Belle, one of Maggie’s personal projects documenting the last years of her great aunt who lived to be 108 years old.

A: Though the images in my New York Archive (“Outer Smut,” “Theaters Under Siege,” “On the Waterfront”) are deemed valuable, historical and an important collection, I believe some of my more personal work which is not as well-known resonates more for me now. Work that’s more in the social issues arena: “Stoopsitters,” (portraits of New Yorkers in the ‘70s taking advantage of this outdoor amenity;  “Great Aunt Belle,” (my Great Aunt, Belle Hopp, the oldest retired school teacher in 1989, lived to be one-hundred eight and a half, and I was able to interview and intensely photograph her over a two-year period documenting the departure of the body and the tenacity of her spirit!

“With Child” is a collection of more than one hundred portraits of nude pregnant women who signed releases wishing to celebrate their decision to be photographed; and, the photo book called “The Spirit of Change,” which put a face on the statistics which show that increasing the interactions between adults and ghetto youth result in their enfranchisement. This was commissioned by Public Private Ventures, a Ford Foundation funded national not for profit.

Mike Foldes is founder and managing editor of Ragazine.CC. You can read more about him in ABOUT US.

This e-interview was conducted in June-July 2015.