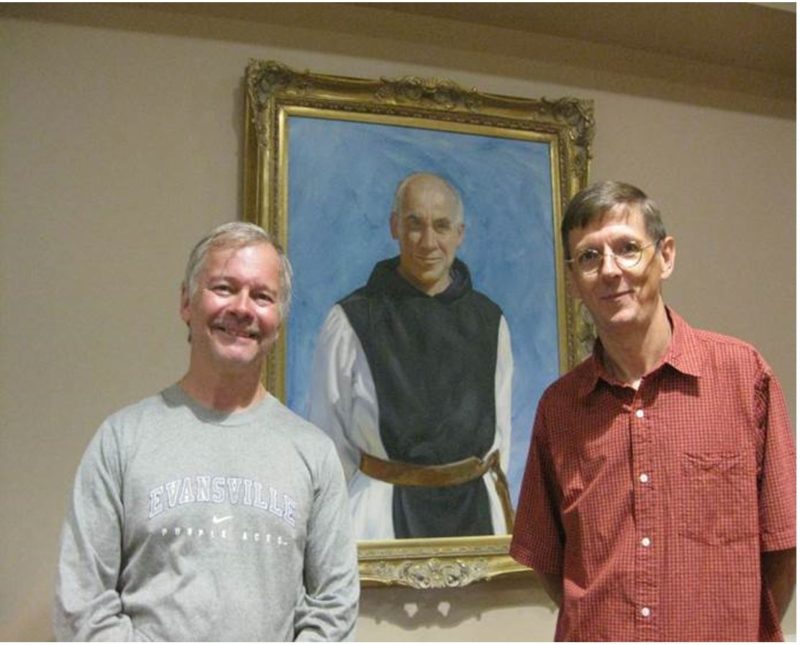 By John Smelcer and Paul Pearson

Common knowledge has it that Thomas Merton wrote extensively during his nearly three decades at the Abbey of Gethsemani. His writing included poetry. What most people don’t know is that there were other poet-monks at Gethsemani, including Fr. Flanagan, Fr. Baldwin (who assumed the role of novice-teacher at the abbey after Merton’s retirement to his hermitage in August of 1965), Br. Irenaeus, and possibly Fr. Raymond. It seems quite natural that monks might try their hand at writing spiritual poetry. After all, the Psalms are poetry. But no one, it appears, seems to know that Merton oftentimes acted as a kind of creative writing teacher-mentor for other monks. Several recently discovered letters seem to attest as much.

In the fall of 1961, Brother Irenaeus, who had been at Gethsemani for about a decade at the time (he left the monastery shortly after Merton’s death; but that’s a different story) gave thirteen of his poems to Father Louis and Father Raymond, who, like Merton, had published a good deal of his writing. Most of the thirteen poems have been lost. As an example, here are two stanzas from “Good Friday,” which both brother monks considered one of the stronger poems, despite the overuse of ellipses:

It took half a year for Father Raymond to respond to Brother Irenaeus:

To his credit, Father Louis replied to Brother Irenaeus much sooner.

With his Columbia University degrees in literature, including a master’s thesis on the poetry and imagery of the Romantic poet William Blake, his experience teaching at Columbia and at St. Bonaventure, and his many years teaching at Gethsemani—four years as master of scholastics and ten years as master of novices (frequently using literature in his classes)—Merton’s evaluation was also encouraging, yet in many respects more critical:

Thankx you for showing me these poems.  You have genuine talent for certain forms of simple rhymed verse.  Monastic Time is a really good poem, it has something of the spirit of Emily Dickinson about it.  Nightfall at Gethsemani is quite good also.  Holy Nativity on the other hand is just a jingle, and the reason is your use of three and four syllable abstract nouns ending in “ity” one on top of the other. This is not so good to do.  The one for Nancy Hamilton is harmonious and smooth, but the imagery tends to be conventional.  Good Friday is a moving affective meditation.  I am sure your gift will serve you well in your spiritual life brother.  Happy feast day, and pray for me. 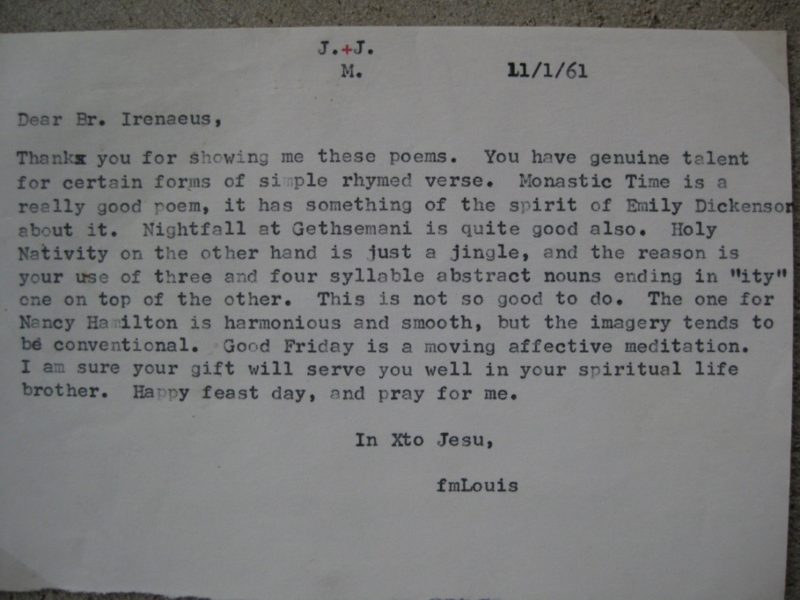 Unpublished letter from Thomas Merton used with permission of the Merton Legacy Trust.

It should be noted that the original poems that survived have Merton’s comments and ranking scribbled in blue pen in the margins.

John Smelcer is a contributing editor to Ragazine.CC. You can read more about him in About Us.

Paul M. Pearson is a Merton scholar and the director of the Thomas Merton Center in Louisville.