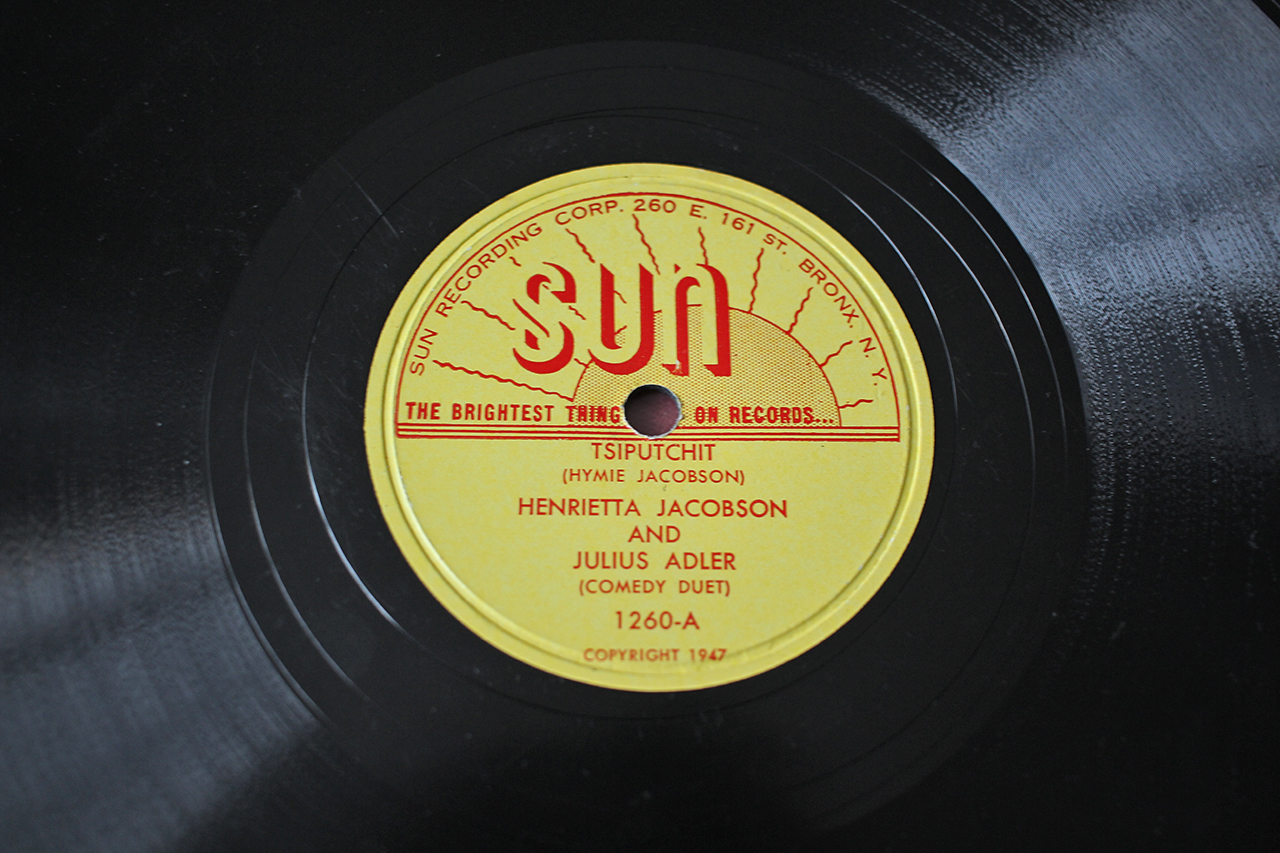 The husband and wife team of Henrietta Jacobson and Julius Adler, long time stars of the Yiddish theater on the Lower East Side, recorded on the Sun label.

Mention the record label Sun and the first associations are Memphis, Elvis or Sam Phillips. It’s what I thought when I first stumbled upon the 78 with a Sun design, but from a company located in the Bronx, Yiddish titles, and an artist I’d never heard of, Jacob Zanger. This 1947 shellac featured two wonderful cabaret interpretations with piano accompaniment by one Fred Mendelsohn, and was the catalyst for an archaeological quest to reconstruct the story behind a label that is largely undocumented in the Internet. Try to google Sun “The Brightest Thing on Records” and nearly the only mention is on a Wikipedia page describing various labels as using the name Sun before the most famous Sun from Memphis. It is said that the Memphis Sun copied the Yiddish Sun’s label design after that company was no longer active.

Yiddish and Klezmer music have been interests of mine since the ’90s, partly due to my family history, a Jewish grandfather whom I never met, and the desire to be in touch with his cultural heritage, but also the realization that the artists, authors, comedians, and filmmakers I admire most invariably turn out to be Jewish. Yiddish as a language is not accessible to the majority of English speakers, but knowledge of German is a huge bonus. The language began to develop in the 9th Century and was solidified by the 15th century, basing nearly three fourths of its vocabulary on the Germanic vernacular of those days. Hebrew, Slavic and Romance influences along with a smattering of English make up the remainder of the language.

Before World War II there were around 13 million Yiddish speakers worldwide, a population that was decimated by the horrifying events of the Holocaust. The rich Yiddish culture that existed in the first half of the 20th century in America and especially in New York City began its decline after World War II. Also, many survivors of the Shoah emigrated to Israel which selected and promoted Hebrew as its official language – Yiddish was not encouraged. In America, Yiddish was the language of the immigrants who had come from the Old Country, and not that of their children, who became more assimilated into English language culture. The good news: Yiddish is by no means a dead language and is making a comeback today. 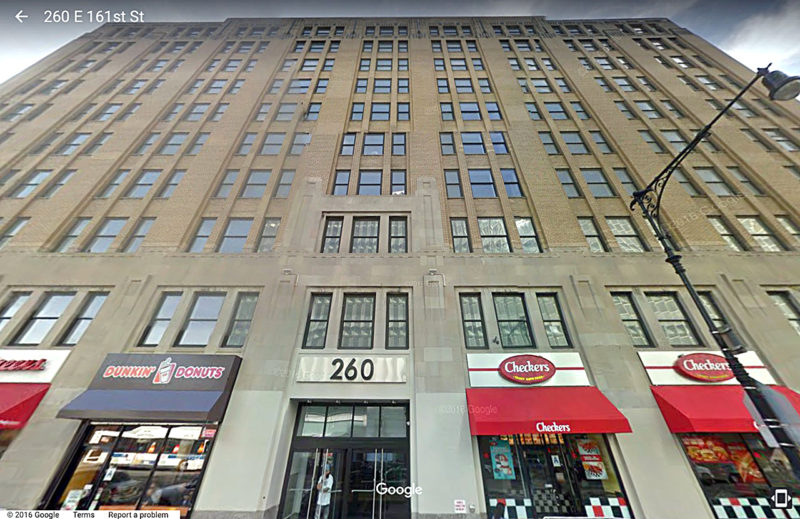 This brief announcement appeared in the Billboard Encyclopedia of Music 1946-47: “A new corporation formed this year by Abe Lyman – not the band leader – Sun Recording Corporation plans to specialize in foreign-language disks. Different lingos to be covered include Yiddish, Hebrew, Spanish, Polish and French, with first pressings probably going to the Yiddish market. Prominent Yiddish stage actors and cantors will be employed as talent for these initial sides. Lyman has a background of more than 20 years spent in the production of foreign-language radio programs and theatricals. Offices at 260 East 161st Street, New York 51, N. Y.” 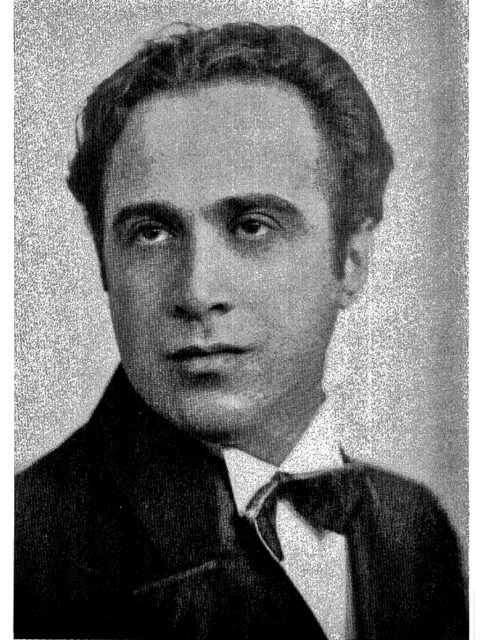 Based on a partial reconstruction of the discography, it seems that Sun Recording Corporation issued around 45 records, the bulk of them in 1947, with the last evidenced release in February 1949. The label appears not to have gone beyond their initial plans of focusing on Yiddish and Hebrew and indeed concentrated on names from the Yiddish theater. Benjamin Siegel delivered eight cantorial sides, mostly in Hebrew. The label’s popular stars were Herman Yablokoff whose Papirossen (Sun 1050) in 1946 was a huge success and Ben-Zion Witler whose My Warsaw (Sun 1055) is too fabulous not to have been a huge success. These singers are masters of expression. Even without an understanding of the text, the emotion is universal, that blend of joy and melancholy, laughing and crying at the same time, which is as close to divine as mortals can reach.

The label had a house band led by Fred Mendelsohn, who also sometimes acted as solo accompanist to the label’s singers, either on piano or organ. The recordings with organ are a curiosity today, resembling closely the sound of an organ played at a contemporary baseball game. Some of the titles on Sun were reissued on the foreign labels of ABC Recording, Elesdisc, Londisc, Melodie and Melodisc. With luck and patience, they can occasionally be found in Ebay and other auction sites.

There are several discs on Sun by Sara Gingold and Velvelle Rothstein, cultured and intense song interpretations that allowed them to demonstrate their powerful vocal range. Very little is documented of their careers online, however. According to the Yiddish Shtetl in Russia, Sara (born 1908) was a long-time member of the Yiddish Art Theater in New York City. Velvelle Rothstein remains a mystery. 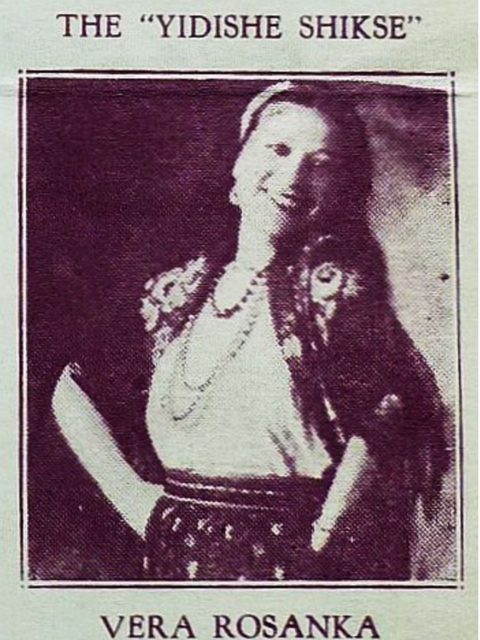 The label had its own diva as well. Vera Rozanko who in a 1934 edition of the Brooklyn Daily Eagle is described as a “Yiddish stage and radio singer” and the “Yiddishe Shiksa”. Shiksa is the term for a Gentile woman. Forbidden pleasures of a non-kosher lady? Her song Freg mich nit (Don’t ask me why) (Sun 140) performed in Yiddish and English with a hint of Russian is the ballad of a woman who cannot help being in love with someone. Billboard gave this and her other disc a good review but complained that Freg mich nit didn’t have a “happy vocal frame.” In my opinion, Vera’s interpretation added an undertone of obsession that went well with the song.

For me the more humorous issues on the label stand out the most. A song by Mildred Rosner was curated in a collection of Yiddish recordings: Songs From The Attic: Vol 2. The title: Ich Darf Dich Vie A Loch In Kop (I need you like a hole in the head) (Sun 1262). There is even a reference to the song Cockeyed Jenny of the Barton Brothers (on Apollo) at about the same time. The song is hilarious and it’s hard to believe Mildred Rosner could be completely unknown, but this reissue appears to be the only evidence of her and the record’s existence.

Better documented are the husband and wife team of Henrietta Jacobson and Julius Adler, long time stars of the Yiddish theater on the Lower East Side. Their duets Yes Mein Tierer Tate / Tsiputchit (Sun 1260) are splendid reflections of the art of cabaret as it existed then. Don’t ask me what Tsiputchit is about, except that it’s loaded with charm. Yes Mein Tierer Tate is dialogue between a father and a daughter. The daughter returns home with her baby, after the man she eloped with left her alone, and has a respectful, reverent conversation with her “I told you so” father: https://www.youtube.com/watch?v=qUQG1sKwxCo

The disc I was fortunate to find, Jacob Zanger’s Vie Halt Ich / Der Shadchen (Sun 1058) is a definite highlight of charisma, culture and expression. The cabaret songs are presented here as an exclusive. Vie Halt Ich is beyond me to understand exactly, it sounds as if the singer is calling for help after a number of terrible things have happened to him. Der Schadchen (The Marriage Broker) is the narrative of a marriage broker whose customers are never satisfied with his matches. It sounds very close to themes in the short stories of Sholem Aleichem. Jacob Zanger himself was born in Warsaw in 1895, played in the Yiddish theater in Russia and East Europe before emigrating to America.

Four sides by Peisachke Burstein on the label are definite comic highlights, delivered with atomic charisma (Sun 1043 & 1044). Listening to the songs again and again, one begins to pick up some of the language, such as “tsuris” the Yiddish word for troubles. So many of the songs are about the troubles and tribulations of daily life, the constant struggle for survival that has been the Jewish fate over centuries. The refrain of his song, Bei Goyim hut men mazel, bei Yidden hut man tsuris says it all. Burstein is one of the more well-remembered stars of Yiddish theater, likely because of several roles in film. He was born 1896 in Poland, toured in East Europe in the ’20s and ’30s, leaving for America days before Hitler invaded Poland.

A small number of the label’s issues were not positively received by Billboard Magazine in its reviews. The Feder Sisters were the label’s answer to the Barry Sisters, with four sides recorded by them, but the verdict was not so friendly: “The shrill voices of the Feder Sisters (2) leave much to be desired in their harmony singing for these Jewish folk songs, and the little interest they stir up in the spinning is largely on the strength of the songs themselves…Gals are entirely out of class in both voice and expression for Vuz Zull Men Zingen (What Shall We Sing).” The songs they tackled were happy folk songs about singing and dancing and at least they retain the charm of the time, even if Billboard wasn’t positively impressed.

Four klezmer instrumentals by George Touller and the Sun ensemble had “hardly enough flash or spirit or even musical substance” and it is probably true, compared to renditions by Dave Tarras or Naftule Brandwein. Bob Russell’s attempt at a hit (Sun 1431) was promptly torpedoed by Billboard:  Avu Tut Dir Vay (Where does it hurt) was a ”frail attempt to pull of another Bei mir bist du schoen” and  to Baby Let’s Repeat they reply, “Let’s not and say we did.” The former is at least redeemed by a pretty decent trumpet solo towards the end. I agree about Let’s Repeat which has the most tortured love lyrics ever written, for example: ”You’re naive if you believe a single date can break the ice / Adam’s rib became his Eve, but that was in paradise.” At least they left Yiddish out of it.

Buddy Reid’s recording of My Extraordinary Gal (Sun 1423) received positive words in Billboard, yet appears to have vanished into oblivion. As Billboard wrote: “Bright ditty well suited for the Reid tonsils. Combo aid good.” Neither the artist nor the record appears anywhere online.

All in all the label did an outstanding job of representing Jewish / Yiddish culture and values in the wake of the unspeakable catastrophe of the Holocaust. It presented a cross section of styles and genres which were shortly to be overshadowed and vanish from the main cultural stage. Most of the artists were of the old guard, as was the musical repertoire. Especially those artists of the Yiddish theater, not necessarily the most prolific when it came to recorded output, put their heartfelt passion into the interpretations, thereby contributing to the canon of particular titles. There were highs and lows on the label, but listening to the records today recalls a lost world and reminds us of the incredibly rich talent that we unfortunately can no longer experience firsthand. If anyone reading this article has additional knowledge of the Sun Recording Corporation, please feel free to contact me. I am extremely interested in learning more.

Much of the music of this bygone era can be found at one of the following Jewish archives:

Many thanks to Christian Ruiz of Khrisrecords.com in Argentina for his help in locating some of these hard to find releases.

Fred Roberts is music editor of Ragazine.CC. He resides in Germany. You can read more about him in About Us.