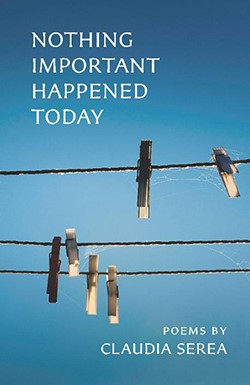 Claudia Serea, who has unique personal experience, a cable-strong voice and is metaphorically limber, writes what she knows, finds the extraordinary in the ordinary, doesn’t overstate her case, takes only what she has earned and speaks with a diction worn to grooves like the oar in the oarlock matched to its singular purpose: to propel the little boat in which she carries her cargo of truth to the port of her readers’ understanding. She is a complete, entire, whole poet. She is reliable, honest, loyal, and true. She is one of the best poets working today. 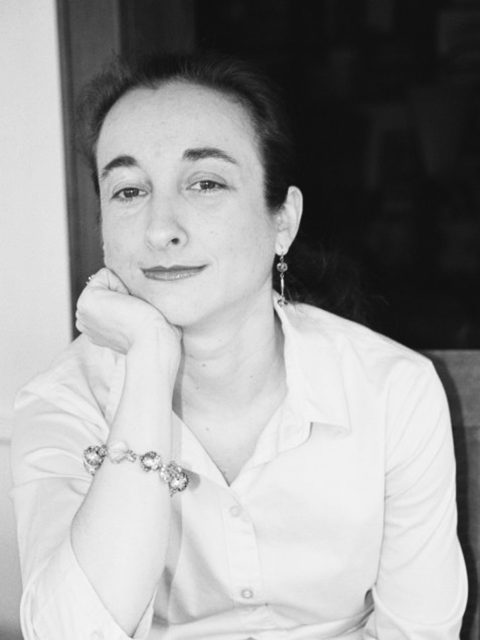 Serea comes by her touches of surrealism and modernism honestly: she grew up in Romania, lived through the Revolution there in 1989 as a teenager, moved to the United States and, after livingfor a time in NYC, settled in Rutherford, New Jersey, where the red wheelbarrow rolls and the white chickens grow. Some of the poems in her big, new, 136-page book, Nothing Important Happened Today, have some of the sly surrealist irony imagery (“my long hair wrapped around the block”) and some show William Carlos Williams’ deadpan comfort with, and confidence that the articles of everyday life can illuminate our predicament best (“by the Buick dealership/ the red and blue balloons”). But she is more than a label. She has full command of all of her poetic faculties and employs them to say something important in the uncluttered syntax of contemporary poetry. What makes her unique is the comprehensive kindness and compassion of her vision, whether she is writing about Romania’s painful history, the revolution that set it free from its communist overlords, the life of a young immigrant arriving here or the tensions of a woman living in two worlds with a family here and parents there, all of which she does magnificently.

The book’s title, Nothing Important Happened Today, is taken from a supposed entry in King George III of England’s diary for July 4, 1776. The irony of the title is multiplied, Serea notes, by the fact King George III made no such entry – in fact, kept no diary – and the myth stemmed from an actual diary entry of King Louis XVI of France from 1789. The title poem of the collection links the quotidian to the eternal with quiet awareness, humility and a touch of that irony:

The evening smells of cow manure.

A spider weaves a web on the satellite dish,
making its own small news.

The sky hangs wet stars on the clothesline,

This ray has traveled 93 million miles
only to find
your unshaven face.

The book has six sections. Section I contains nine poems focusing on the Romanian Revolution in December 1989. These are beautiful poems that render the confusion and brutality of the short war in spare language and brilliant observation. In “Face to face” she pleads: “God, look at us,/ unless you wear a blindfold.” In “I dreamed I was beautiful,” she captures the mixed horror, compassion and terror of the moment in a compact stanza:

My body was covered in tattoos
made by rifle butts and boots
and my long hair wrapped around the block
so no one would feel the cold.

Another poem in this section, “The bullet that found Mrs. Cosma while she was hanging laundry on the balcony,” takes the bravura turn of adopting the bullet’s point of view: “A soft splash/ into her flesh/ and I’m in.” And while Serea’s poems do not generally engage in word play, she can do so with devastating effect. In “December song,” presented in a dirge-like chant, repeating the name of the month over and over while it catalogs the devastation of war, contains this stunner:

December when the turncoats
turned coats. . .

I don’t know when I’ve ever seen the implicit poetry of a word made so economically explicit.
The final poem in this section, “To the young man in the photo,” which is directed to a martyr of the war, Serea’s imagery is dense and unrelenting:

With your teenage body,
thin as a key,
you opened history’s gates.

Nor does she shy away from recognizing the personal significance of that sacrifice: You offered your chest/ to the metal rain// so I can write/in English, today.

If these magisterial poems about the liberation of Romania were all, it would be enough, but they are just the beginning. Section II is called “When I go back” and has two of Serea’s best poems: “Danube, Danube” and “My father, the great stone statue.” “Danube, Danube” is an ode to the river that is figured as the vehicle of personal and Romanian history. When Serea reads this poem at readings, a great elegiac silence opens up around its short lines. This is how it ends:

Danube, Danube,
this song is for you and me.

Take me to the open sea.

rock me to sleep,
small as a shell,
roll me, a ring

on your mud fingers,
hide me
under your pelican wing.

Danube, Danube, road without dust,
take me with you
away from the past.

In a different, lighter, but still deep key, “My father, the great stone statue” is a wonderful father/daughter conflict poem, in which Serea lets the reader see the bitterness of the fight as well as her obvious love. She begins with rebellion that casts her father as a version of the statue of Lenin that resided in many a town square:

I can’t wait to marry
just to spite you,
the son of a peasant
just like you,
you, the great stone leader
on your pedestal,

with your raised hand
pointing to the brilliant future
only you could see.

When she determines to leave home and emigrate to the United States, the imagery of the statue returns, and the anger of rebellion shifts to compassion and then back to critical distance:

And you, who always wanted to emigrate,
you couldn’t ask me to stay.

You crumbled before my eyes.

You, the strong one,
distant on your pedestal,
broke down to pieces,
to dust.

A simple man
about to lose his child.

You cry too easily,
I said.

This is great poetry because it is agility, concision and scope, but also because its free-verse cadences are sure; “broke down to pieces,/ to dust” comes back moments later as “You cry too easily,/ I said,” and gives a hard stop to the section on her leaving (Also, note the half rhyme in the first quoted section, between “spite you” and “like you”. The ending of the poem shows just how complex it is for a daughter to leave her father in these circumstances:

to claim it
and make you proud.

In Section III, “The Greatest City On Earth” Serea writes about her young days in New York City with credible brio. Her poem “Sonia” about the cat she brought with her from Romania, is the saddest piece of verse about a cat in New York since Kenny Rankin’s song “Killed a Cat” on his Silver Morning album.

Section IV, called “Dear Dust,” like Section II, “When I Go Back” is about returning to Romania to visit, but these poems have a more valedictory tone, and they convey strong emotional connection, real and wished for, through their great restraint. When the poem “What Mom didn’t say,” begins “Don’t go,” the unfulfilled hope that falls between the title and its expression is so suddenly devastating, it could almost end there. Still, it goes on, beautifully:

Have some fresh eggs
laid by real Romanian chickens

You won’t find these over there.

Have some ice cream. Don’t go.
I love you.

In “Away from the lights of the house,” in which Serea takes on the standard poetic task of appreciating the mystery of a starry night, she starts by claiming kinship with “the first woman/ who walked out of her house/ into this dark dome,” and

filled the yard of the sky
with domestic animals and birds,
and the yard screeched
when it turned
like a rusty wheel
with the shrill of crickets.

So much goes right in this brief section. First, the simple, unpretentious way that she annexes the sky to the yard; second, the way she makes the yard turn rather than the stars while conflating the sound of the crickets with the great wheel of the cosmos; and third, the way she uses “shrill” in its least usual sense, as a noun, and thereby lifts the whole stanza to a higher plateau of loveliness. Brilliant.

Section V, “Better Wine than Water” is about love, and no one writes about love with more metaphoric lyricism than Claudia Serea:

I was young
and had a breeze for a heart.

Your hands startled
two quiet birds in my breasts.

The moon is a closed gate,
but I got the key.

Soon, I’ll knock at your door
with moth fingers

or, when lyricism proves too much, understatement is its own lyric:

At 18, we needed
very little sleep.

I’m tempted to say that Section VI, “I am a comma,” has the 12 poems that did not fit elsewhere, but two of the poems here are among the best in the collection: “The other woman” and “Red and blue balloons.” “The other woman” is a poem about girlfriends shopping and about the eponymous ‘other woman’ that is so sly and compassionate that it still surprises me every time I hear her read it. “Red and blue balloons,” from which I have already quoted, is about bringing your new-born baby home from the hospital, and for me, it is the poem where Serea cleaves most strongly and successfully to William Carlos Williams’ close attention to detail and restraint. I’ll end with that poem so that the last voice you hear is hers, not mine, but before I sign off, let me tell you, this is a book you will love. I do:

For days, we lay tangled in wires,
dripping tubes,
and purple pain tendrils.

I hallucinated
a garden of ashen roses
my dead grandmother was pruning.

Big eyes,
small mouth,
you were finally rescued
from my feverish womb.

In the nightmare cloud,
I curled around you.

and I was looking out the window
at the blinding world.

and everything was new
and beautiful –

and by the Buick dealership,
the red and blue balloons.

Arthur Russell is a poet, living in Nutley, New Jersey. He is recipient of both Providence Fine Arts Work Center and Syracuse University fellowships, as well as Brooklyn Poet’s YAWP Poem of the Year for 2015, and honorable mention in the Allen Ginsberg Poetry Prize 2016. His poems have appeared or are forthcoming in the Paterson Literary Review, Prelude, Yellow Chair Journal, Shot Glass Journal, Brooklyn Poets Anthology and the Red Wheelbarrow #9. 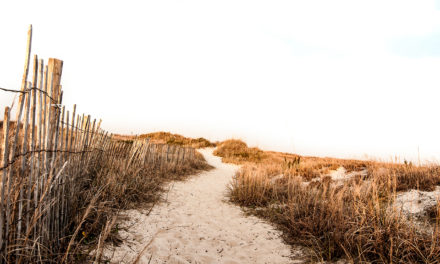