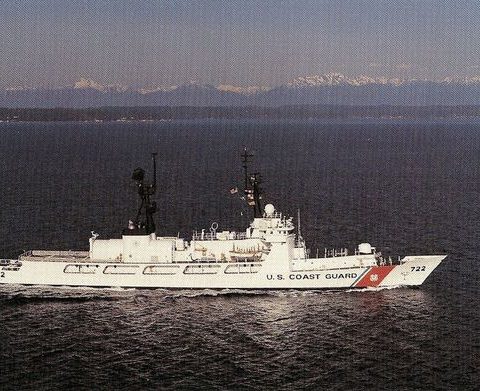 I could feel the ghosts; the ocean ghosts.

They were ghosts of sea-going culture, ghosts of history, ghosts of traditions, ghosts of ships, and ghosts of war; the ghosts of men surrounding the cruise as the MORGENTAHU diverted from the Bering Sea and the Alaskan Patrol on the way to Tokyo.

“On the way to Tokyo” – even that was a ghost.  Saying it – even thinking it – resurrected the spirit of the past when other American military members traversed the same waters on the way to Tokyo.  Forty-three years before, the conquering mission was almost complete and victory was close – so close.

The men who died in those closing months were the saddest of ghosts.  All I had to do was look overboard and see the bow cutting through the water or stand on the fantail and look at our wake and imagine the sea battles that took so many into the ocean never to be reclaimed. For the whole war, the waters filled up with bodies; young men and boys, but the ones who almost saw victory are somehow more sorrowful.  Almost saw victory is a ghost. Lost at sea is a ghost.

My baby-boomer perspectives had been created and formed by movies, history books, sea-stories, and the silence of the sailors; that group of men representing the greatest generation (though their silence would not let them personally claim any greatness whatsoever).  And by the time I retraced their course corrections, many of the sailors I had met were civilian ghosts, having joined the shipmates they had lost so long before.

But there I was on a United States ship – the Coast Guard Cutter MORGENTHAU (WHEC 722) on the way to Tokyo just like they had been.  All I knew about their actual journey, however, was from movies (Mr. Roberts, Midway, Run Silent, Run Deep, PT 109, Operation Petticoat) with torpedo scenes from the wide pacific and damage control-men doing their best to keep their ships from sinking.  But this was different; this was real; this was mine. Even if their ghosts were there.

Every watch I stood was a connection to the watches they stood.  The sea-going expectations of standing watch were engrained in my peacetime service just as well as they had been in their wartime service, though General Quarters was only a drill for me.  Still, that sense of responsibility for the safety of ship and crew was there. On the bridge, on the helm, on the flying bridge, I accepted the responsibility and stared out at the nautical miles full of emptiness fighting off the mundanity of the ocean’s desert landscape.  And I knew underneath the surface there were hulking pieces of history with stories that would never be told; the ghost of unknown stories.

The unknown holds a place in seafaring traditions.  Here Be Dragons appeared only on the Lenox Globe but entered the lexicon of sailors and map-makers since the 1700s. I thought about the 1700s – the whaling ships, the merchant ships, the military ships; all the ships that romanticized their traditions into my mind and made me long to go to sea.  And how many ships from before the 1700s were beneath the surface?  The ships that were going to Tokyo before it was Tokyo did not all make it, and I was sailing over their stories; memories unknown.  There were the ghosts of hulls never to be salvaged.

There’s a scene in the movie Jaws, when Robert Shaw as Captain Quint resurrects the INDIANAPOLIS and the ghosts that were beneath me on that cruise.  It’s a haunting scene because of the unsalvageable aspects of being taken by the sea.  Whether it is by drowning or by sharks, the sea claims who it wants to claim, and it’s too vast and powerful for simple little minds to comprehend.  Bobbing in the sea hoping for rescue is really waiting for death, so when Shaw reflectively says, “I’ll never put on a life jacket again” it’s just a statement of submission to the power of the ocean, and it strikes fear in me every time I see that movie and hear him tell the story. Fear is a ghost.

But it wasn’t just American sailors buried in the water.  Every nation before, during, and after the war has lost sailors, and every nation in the world has lost men to the sea.  From whalers to boatswain mates, from America and Japan; from all around the globe, men have gone to find the secrets only the ocean knows. And I accepted their culture as my own.  Through the sea sickness and the marvels of nature’s weather, navigating the ocean with high-tech equipment, sextants, or by the stars, I could feel their culture embrace me; welcome me.

Despite what Melville did by telling and romanticizing the pursuit of Moby Dick, and no matter what Gregory Peck did for Captain Ahab, whalers were the lowest of sailors.  Outlaws and sinners; outcasts and undesirables; pirates and wanderers could all find a place – if not a new beginning – on a whaling ship. And I, even on the USCG Cutter, could identify with them.  The ocean connected us with its beauty, its danger, its bioluminescence and mystery. All bequeathed with the understanding and judgeless acceptance of going to sea.  Going to sea is a ghost. 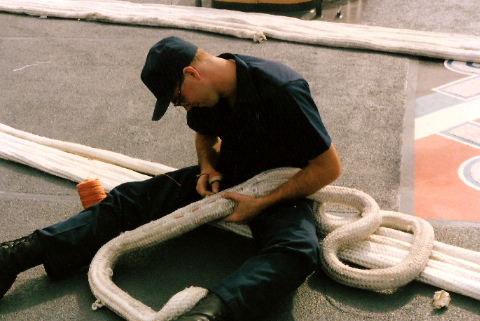 The author turning to. Photographer unknown.

On the way to Tokyo, I was initiated into the Realm of the Golden Dragon at the 180th meridian.  The long line of Golden Dragons welcomed me, and King Neptune let me kiss his belly before I swam through the whale’s intestines to be anointed into their ranks.  The culture of seagoing accepted me into its precious realms of initiated accomplishment.  With beliefs and values; artifacts; behaviors and thoughts; assumptions and knowledge, the culture put salt water in my land-lubber veins never to bleed out no matter how far inland – how far from the sea – I would travel. Culture is a ghost.

I learned the fancywork of sailors who did not have VCRs or TVs to pass the time.  Even though there were VCRs and TVs onboard, I picked up line and tied knots – bowlines, Turk’s heads, monkey’s fists – and I coxcombed the railings to decorate the ship with craft and lore.  And as I learned those old ways, I felt connected to those old sailors.  The knowledge of the old craft is a ghost; a scrimshawed ghost

And I was haunted.  All the way across the ocean on the way to Tokyo to celebrate the 40th anniversary of the Japanese Coast Guard, I was haunted by the sea, the stories, the history, the unknown, the traditions, the journey. The haunting itself is a ghost.

It was a different time for the adventurers and adventures I was haunted by, but the ocean never changes. Its absolute being is authentic, and the cutter was no match, so only by the grace of Neptune were we granted safe passage to pull into Tokyo Harbor.  Japan unfolded her mysteries for us and we cruised into the pier to tie up where there were Japanese citizens waved and welcomed us to their country.

I was on the fo’c’stle, having heaved line one to the line handlers on the wharf to put over the bollard; creating a new umbilical cord connecting us – connecting me – to the all-loving mother of sea-stories that would be told and remembered and taken with us through our lives; guiding our lives while determining images perceived by others while solidifying our individual identities of self.  It was a line connecting us to Japan; to adventure; to the ghosts of those other sailors – other adventurers – who had made it to the same pier to connect to their own stories.  Stories are a ghost.

I smiled and waved back at the women and children greeting us on the pier.  A store-keeper chief looked at me as I was waving, and he watched for a few minutes; looking first at the pier and the crowd waving, and then back at me smiling and waving from the deck of the cutter.  My gaze was locked on the gaze of the Japanese greeters whose gaze was locked back on mine, and the connection was complete; real.  Reality is a ghost.

I was a junior enlisted member; a little older than most of my peers, but still a junior member of the organization.   But it was an organization in which I had found a home – a haunted house that dared me to stay the night in its secret berthing areas to see if I could survive. And I did survive; embraced and embracing in the arms of ghosts

The Chief was amazed at the connection he was witnessing.

“Man,” he said to me, “you have a smile that would be welcomed in any port.”

That made my smile beam brighter, and the relationship with my unknown hosts deepened in me the same as history and tradition sinks into the secret depths of the ocean I had just crossed. And I thought, “The ghosts that haunt me would have it no other way.”

About the author: Ben White has 26 years of education and 22 years of military service. All that experience had fooled him into thinking he was was poet. But he is not a poet at all. He is a witness. What he writes is testimony.tent goes here