The Middle of Everywhere

Lisa Beck, “The Middle of Everywhere”

In the most iconographic and metaphysical of the apocryphal scriptures ( the Gospel according to Philip – late Fourth Century) we find the term “temple space” to define the dimensions of a Supreme Being. What Lisa Beck celebrates is the “temple space” of painting, the sensory space formed by the difficult-to-accomplish accord between form, substance, the senses, and the means used to achieve it. 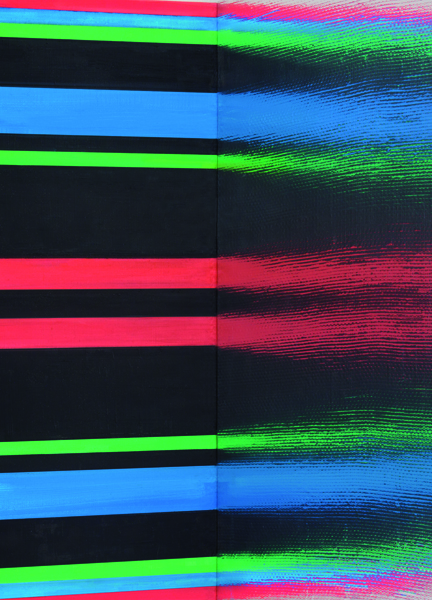 For the artist,  the basic harmonies transcribe the joy at being alive that we find in the banality of the everyday. Beck creates fragments and extracts of movements, faces, shapes and light. Even if the  human figure does not appear in her painting, she brings it to where dialogues take place and all solitude is shattered. The fragility and sometimes precarious coherence of the stuck-together parts of the paintings speak to the fragility of life and the fugacity of the attitudes she captures. In her opus painting black sweeps through the fjords of pure colors brushed while still wet, mixing in with them and creating an infinity of tones that transform the work.

It’s at the moment when there are no longer any subjects that the subject appears. Perhaps it can thus serve to place human beings  (even though they are not present in the opus) at the threshold of a complex ensemble that overwhelms them, at the heart of the infinite.  The infinity of the monochrome, the infinity of those shades of black-gray forming a network of  lines that assures the passage of the real to the construction of a painting.

The “unnamable” (Samuel Beckett)  becomes the object, or the reason, of the painting. And the artist may say, like the writer Beckett’s heroes without names: “What has to be avoided, God knows why, is the spirit of systems. People with things, people without things, things without people, it doesn’t matter. I’m sure I’ll be able to get rid of all that very soon. I don’t know how. The easiest thing would be to not get started, but I have to start. That means I have to go on. I might end up in a mess. Incessant comings and goings – what a three-ring circus. I’m calm, go on.”

About the reviewer: Jean-Paul Gavard-Perrett writes about music and the visual arts. Born in 1947 in Chambery (France), he was a professor of communication at the Université de Savoie. He has published several essays, mainly about Samuel Beckett and painting, and short fiction, most recently “Labyrinthes,” Editions Marie Delarbre.