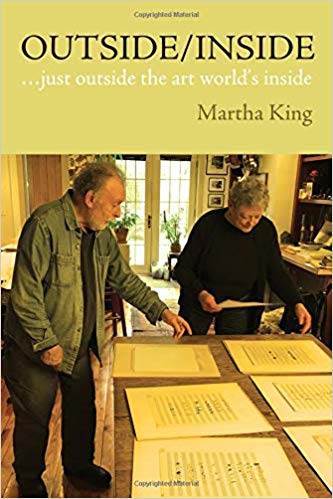 …just outside the art world’s inside

or many years when I was of high school age I wondered what it would be like to go to Black Mountain College. I didn’t know at the time what little I’d heard applied to an institution that no longer existed, except, that is, in the influences it would have on social, economic, cultural and scientific life in the coming decades – and, perhaps, centuries. While I missed out on sharing in that provocative educational opportunity, I had a chance to experience it in some fashion in the pages of Martha King’s wonderful Outside/Inside, a personal narrative that introduces the reader to a pantheon of literary and artistic personalities, not the least of whom is her life partner Basil “Baz” King. Many of that group shared months or years living, working, creating and recreating at what was Black Mountain, and later in life in other parts of the United States and the world. The appendix of capsule bios of people mentioned “in order of appearance” is as impressive an assortment of creative and influential friends and acquaintances as one might desire to have had in the aesthetically critical, politically and socially conflicted, and economically free-wheeling post-War, mid-Century America.

King lays out a personal history of experience as girl, daughter, woman, wife, mother, writer and artist in a captivating memoir overflowing with details of events and conversations culled from decades of experiences that carried her on wings through good times and bad, from a childhood in Chapel Hill to a term at Black Mountain, to San Francisco, New York City, as well as places between and afar, to finally settle in Brooklyn where she and Basil made a home for themselves and their children in Park Slope. What begins as an explanation of how she came to attend BMC evolves into the story of a lifelong relationship wrapped in a manifesto presenting Basil’s work as authentic and as valuable as any of their contemporaries. “The jury is still out…” she writes in a preface, in reference to his output, and throughout the book elevates his drawings, paintings, mixed media collaborations and publishing efforts to a level that demands we take another look. That we analyze and examine Basil King’s output against the backdrop of works by Koontz, Warhol, de Kooning and other of their (and, for many of us, our) contemporaries as more immediately recognizable by name, if not on sight.

While she writes of well-known personalities and familiar events, King also offers portraits of friends and acquaintances whose lives ended unheroically in tragedy from disease, addiction and accidents, of failed relationships, of questionable ethics and supreme efforts that went unrecognized. She steadfastly stands by Basil’s work as exemplary, and in a section of the book about their time in Grand Haven, Michigan, discusses his work and influence on a community not used to the sort of incongruous thought patterns that generate energy and evidence of commitment to the creative life. The framework for the claim that Basil King deserves to be remembered for his contributions to life and art is based as much upon his collaborations as with his output, itself.

As I write this, I see that Edward Hopper’s “Chop Suey” just sold at auction for more than $90 million, where it was expected to fetch around $70 million. So what is it with art today that the work of someone else who spent a lifetime putting shoulder to the wheel to transform ethereal to material and share it with the world in ways not seen, heard or read before, should not be remembered as having served his master in the same vigorous pursuit of truth? Who is the visionary, and who is popularized by some who should know better? Whose work deserves mention in the afterlife, which is the life of those who survive the creator?

King rightfully acknowledges that her belief in the value of the work of Basil King is not to be misread as a woman standing by her man, but as an assessment of output against the panorama of people, places and things she and he lived with and through, and the influences they had on one another, as well as the work of unknown others, that make Basil King’s work important. And, as Martha King’s witness to, and assessments of, those same Times prove, she is a literary power in her own right.  I don’t believe it is too much to say Outside/Inside is an informative and enjoyable read, and important reference to a vital era of intellectual curiosity and creativity too rapidly passing with its well-drawn characters into the realms of Art History.

Mike Foldes is founder and managing editor of Ragazine.cc. You can read more about him in About Us.