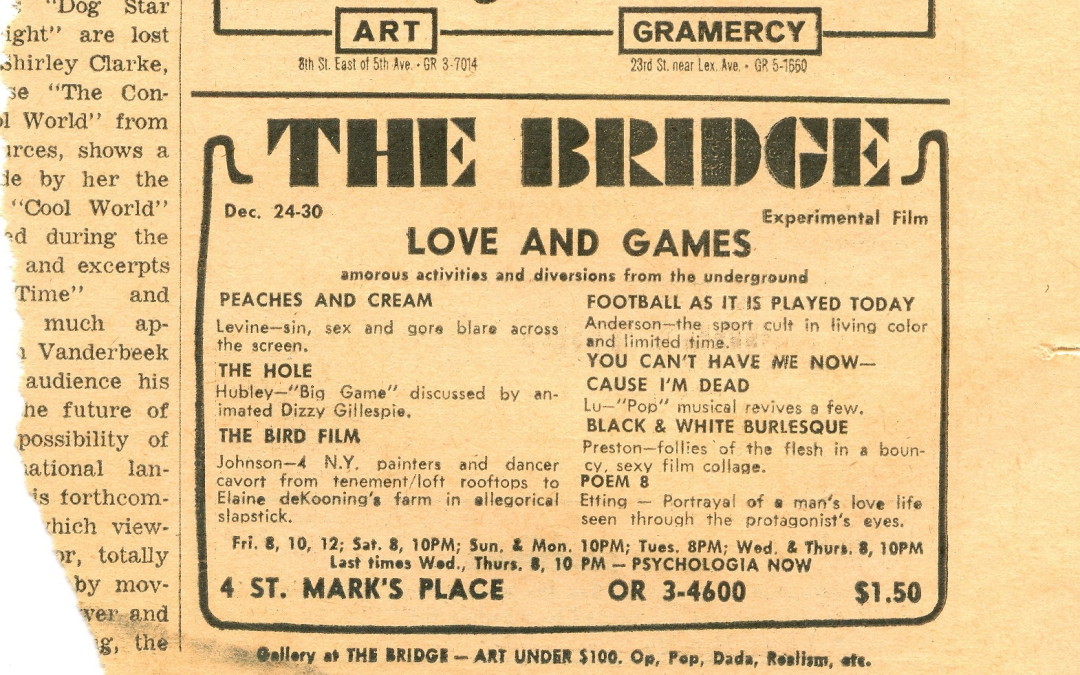 A friend of mine, and former student, Thaddeus Rutkowski, recently sent me an e-mail about a project on Indiegogo to raise funds for an independent filmmaker who is planning to make a movie from his novel “Tetched.” I didn’t know such fund raising efforts went on and found the whole thing quite interesting. I don’t want you to think that I am ancient, but I remember back when I was young we looked for “patrons,” rich folks who were willing to put up money for art projects. Unfortunately, I didn’t often find them, so maybe Indiegogo is a better idea; at least it seems more democratic. Or you can teach art for 33 years and then retire, only to find that the dollars you put away back then are now worth only about thirty-three cents.

Thad’s project got me thinking of how I once aspired to be a filmmaker. Wait! You say, don’t get started, is there anything that you haven’t aspired to be. Yes, I say, that would appear to be my problem. In this age of specialization the “Renaissance Man” is a no longer admired. Not that I am claiming such a distinction. I have always been a curious fool who enjoys learning new things, mostly by myself, which I can then just as easily drop.

I suppose this story begins in the summer of 1962 when I stopped to help a car that had broken down on the East Side Highway in Manhattan. I can’t remember the exact details as this was over fifty-two years ago, so I suppose some of what follows might fall into the creative nonfiction category. Back in the 1960s, before cell phones existed, if your car broke down you tied a white handkerchief to your antennae and stood by the vehicle until help came, usually a policeman, who summoned a tow truck. It must have been a clear day as I remember having the top down on my Austin-Healy Sprite. As I passed the stopped car I recognized one of the men standing there as the person who sold tickets at the cinema around the corner from where I lived. As I recall it was  the Charles Theater, and the artist’s bar on the next corner was Stanley’s and the park a block away was Tompkins Square, and the avenue was “A”. I lived on 10th Street. This was the Lower East Side before it became the trendy “East Village.”

I will interrupt this story to speak of the value of money again. I recently checked the internet for prices of real estate in lower Manhattan where I had once lived. By coincidence my former apartment on 10th Street was for rent. The space I had paid $85. per month for back in 1962 was now listed for $3500. Alas, my $25. storefront studio on 11th Street was gone, torn down to make room for an apartment building, and my seventh floor loft on the corner of Broadway and 13th Street, that I had paid the outrageous rent of $350. per month in 1968 was now a luxury condo, for sale at $3.5 million. Now I suppose that for some dwellers of this earth this price is a steal; it is after all considerably less than some fool with more money than taste paid for a ten foot tall “Balloon Dog” sculpture, by an artist whose name I shall not mention. The “Balloon Dog” went for $58.4 million, a bit more than the $40.9 million it cost to build The Empire State Building back in 1931.

For the favor of driving the stranded ticket seller, who it turned out was also the theater’s owner, to an appointment, which was on my way, while his friend stayed with the car, I was given a lifetime pass for two to his cinema. Now I had gone to this theater on several occasions, and observing the numerous empty seats for his indie and experimental film screenings figured that the lifetime of the pass would not be too long and so I went almost every evening. This was how I became interested in the filmmaking that was going on at the time.

Shortly after this car rescue incident I met the sculptor and photographer Eddie Johnson through Elaine de Kooning. Eddie and I became fast friends and used to eke out a living doing free-lance construction work together.  Our clients were mostly local artists of reputation, like Elaine’s husband Bill (Willem) and Paul Jenkins, and the poet Frank O’Hara. I also stretched canvases and did various other jobs before I got into the screen printing business, Chiron Press, about which I shall write more in the future. However, if you can’t wait to read about it you can go to The Huffington Post web site and type my name in the search block and a recent article about me and the press will come up.

Over the next two years I made several B&W movies with Eddie who was most known for the photos he took of John F. Kennedy for LIFE magazine while Elaine was painting her controversial portrait of the president. Our most successful film, which I wrote, directed and performed in was “The Bird Film.” This film was shown at The Bridge Cinema in NYC, and several other places including the Yale Film Festival and the Albuquerque Film Festival. In one theater, I believe that it was somewhere in New Jersey, it was on a double feature with Kenneth Anger’s classic “Scorpio Rising.” It was also shown in Milan, Italy at Studio D’ars in 1985

Unfortunately most of the people associated with this film, including Eddie Johnson, are now dead. The star of the movie, Deborah Lee, who played “the bird” had appeared in Warhol movies. Shortly after “The Bird Film” was finished she danced off the roof of her 7th Street apartment building. People said that she had begun to believe that she was the bird in the movie. Warren Davis a painter who did “the bear,” died in a motorcycle accident during the period we were shooting the film and was replaced briefly by Thaddeus Rutkowski’s father, Richard, also passed away. As the bear costume was quite warm and quite heavy it was hard to get people to fill this role. “The bird watcher” was played by the painter Lorenzo Gilchrist, who taught for some time at Towson University, but has since disappeared from sight, or should I say the internet. Another person in the film I have lost touch with is Liza Condon, who was the daughter of Jazz great Eddie Condon.

“The Bird Film,” was shot on sets constructed in Eddie’s loft on East Broadway and in the open air at Elaine de Kooning’s farm in upstate New York. Eddie and I collaborated on the sets and costumes. The movie was filmed with Eddie’s 16mm Bolex using A-B reversal film to give it a higher contrast and an old-time look. Halfway through the project Eddie’s camera mysteriously disappeared from his studio. Just as mysteriously a painter friend of Eddie’s, known to have drug habit, was able to find him a similar replacement camera for much less than the cost of a new one. The camera was so similar in fact that the scratches on the handle matched those of the missing camera exactly.

“The Bird Film” had no dialogue.  The plot was advanced by the use of mime and dance, by people wearing surreal masks and costumes, accompanied by music. The music was scored by John Herbert MacDowell employing a collage of Tchaikovsky’s “The Firebird Suite” and Dizzy Gillespie’s “Chasing the Bird.” MacDowell took a copy of the film to Hollywood as a demonstration reel. He was successful with it as his first work was the score for “The Wedding Party” which was Brian De Palma’s first film, and starred Robert De Niro. After “The Bird Film” I became very busy with my screen printing business and had little time to work with Eddie on any other films. This was my last effort at filmmaking for about twenty years.

In the 1980s I edited a TV documentary of my aerial theater performances using footage shot by NYC and Syracuse TV stations. This was shown widely including in Switzerland at the Locarno Video festival in 1985. I was also invited to go there as the feature performance artist. While there I participated in a two minute video competition. Guest artists were invited to use the facilities to make a two minute video. My effort took second place, first place going to the legendary Nam June Paik. You can see the Art Flyer video on my web, but the two minute video is gone to I don’t know where. Over the years much of my work has been lost. Art galleries go out of business and the owners disappear, as does your work that they had. But then I also destroyed a lot of it myself; however, that is my problem.

Stephen Poleskie’s writing has appeared in literary journals and anthologies in Australia, Czech Republic, Germany, India, Italy, Mexico, the Philippines, and the UK, as well as in the USA, and been nominated for a Pushcart Prize.  He has published seven novels. His artworks are in the collections of numerous museums, including the MoMA, and the Metropolitan Museum, in New York, and the Tate Gallery, and Victoria and Albert Museum in London. He lives in Ithaca, NY with his wife the author Jeanne Mackin.