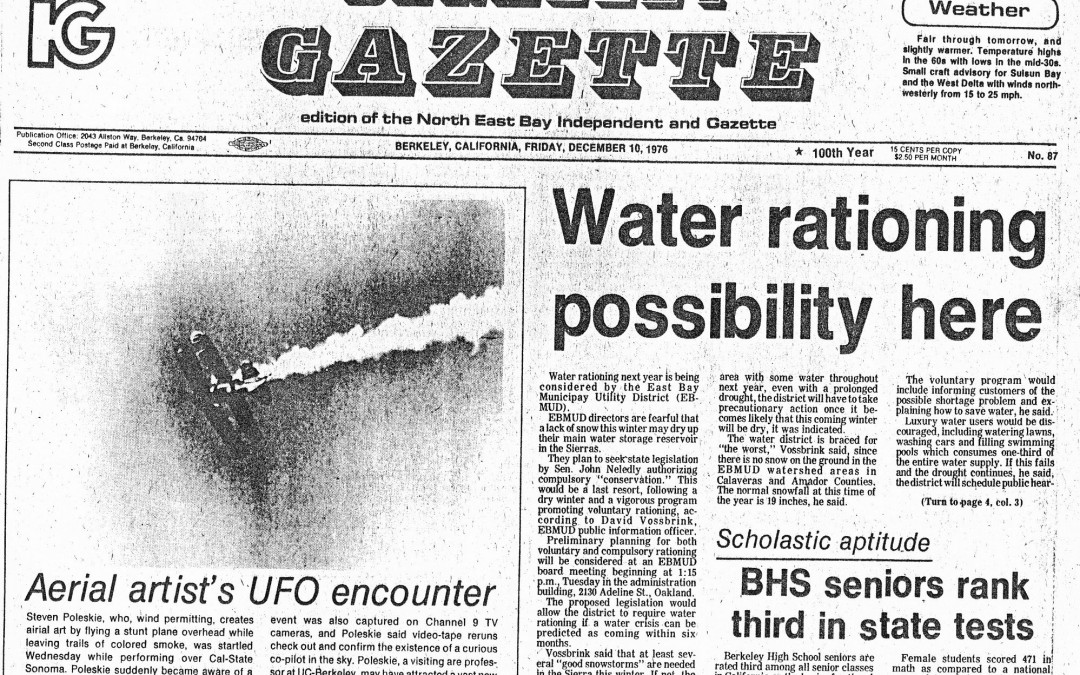 UFO article on the front page of the Berkeley Gazette

My previous article, about a ghost I met while I was staying in the Palazzo Massimo in Rome, received quite a number of comments. You say you read the article and only saw one item in the comment box. Yes, you are right. It is not that my friends can’t figure out the code necessary to post. Although 5 x ?  = 49 was a hard one for off the top of your head, I am sure one’s cell phone could have come up with a quick answer. No, my friends are more discreet, or else disinclined to use pseudonyms. My e-mail inbox found messages like: “A ghost! Are you out of your f ***ing mind? Next thing you know you will be telling us that you’ve seen a UFO.” Well I have seen a UFO, on at least two occasions that were well documented.

Let me describe my first UFO sighting, which goes back to 1967 and relates a bit to my earlier motorcycle article. I had bought a Bultaco TSS, which was a former factory road racer, and I was excited to campaign it. Now it’s not the kind of machine one could roar around Central Park practicing with as it was strictly a racing bike, therefore not street legal. The nearest place I could practice was Lime Rock Park, a race track near Salisbury, Connecticut. My artist friend, Nick Krushenick, who had volunteered to be my mechanic, and I were on our way there in my Volvo, the Bultaco on a trailer behind. Salisbury is located in the northwestern corner of Connecticut, and not a short drive from Manhattan. I can’t recall what route we took to get there, but as we were motoring along I clearly remember seeing a large white object that appeared to be hovering over the tree-lined highway. Both Nick and I saw it and called each other’s attention to the thing, which disappeared almost immediately. We joked about what it might be. I can’t remember the name of a town that we were near, and I can’t ask Nick as he has since passed away.

On the way home I happened to stop for gas at a station near where we had seen the strange object in the sky. I remember going into the office to pay my bill and being shocked by the words I heard on the radio: “. . . there were numerous reports today by local residents of an unidentified flying object in the sky over our area.” The announcer gave a time which matched closely with the time we had seen our object passing over the road. When I got back in the car I told Nick what I had heard and he was as shocked as I was.

My second UFO observation is much more personal, an investigation of which has been recently reopened. The Swiss art historian Inge Hinterwaldner had been to interview me for a book she is writing. She is trying to document all the sky pieces I performed. She was especially fascinated when I told her about an event I had done in Sonoma, California, where a UFO had appeared.

Shortly after Hinterwaldner’s visit I received a correspondence from the person who is in charge of the media files at Sonoma State University. It seems that they were cleaning out their art file storeroom and found a video tape of the Aerial Theater performance that I did over their campus in December of 1976. The tape was in the now obsolete reel-to-reel format. They wanted my permission to show the tape after they had it converted to digital format. When I mentioned in my correspondence that this was the performance where a UFO had turned up, and is seen on the video, the women allowed as how she had heard this rumor, but hadn’t given the idea much credibility until I mentioned it to her.

I had been invited to be a visiting artist at The University of California at Berkeley. I decided that I would fly out there in my newly rebuilt Pitts Special biplane. The cross-country trip would be a feat in itself, but I wanted to have my biplane in California as I also hoped to do a number of performances while I was out there. As I recall, Sonoma was not my first event. I had flown over San Pablo Reservoir, near Berkeley and the campus of California State University Stanislaus in Turlock. At the time I was living in San Francisco, however, the nearest hangar I could find for my Pitts was in Livermore, so I was doing a lot of commuting, at first on a Honda motorcycle, but when my wife came out I traded it for a Honda car.

I remember two significant images from the UFO sighting at Sonoma, although when they occurred I hadn’t identified them as such. It was only after the performance, when I was having a meal with some of the faculty members, that my mind began to question what I saw. As we were eating, I recall the sculptor Brian Hall, asking: “Steve, what was that white object that you brought with you that followed you around while you were doing your performance?” My answer of: “What white object? I didn’t bring anything with me but my airplane,” brought a stunned silence to the table.

Bill Morehouse, who taught art at the university, and who had arranged my event, was the first to explain. He had clearly seen the object, as had hundreds of people on the ground, and he had captured it on video. Heads began to nod in agreement; they had all seen the “white object.” I was to give a lecture on my work that evening, the question was sure to come up. When I recalled the two sightings that I had, they now took on a different perspective in my mind.

I had pushed the nose of the biplane over, diving down to gain speed. Suddenly there was what I thought was another airplane under me. At 180 MPH you don’t ask questions when you see something in your line, you maneuver to avoid it. I supposed that it was someone who had strayed into my airspace. I was annoyed as I had an aerobatic waiver from the FAA, and NOTAMs, or Notices to Airman had been posted warning pilots to avoid this area during the specified time of my performance. Whatever had intruded on my airspace was white, and when I pulled up and looked around I never saw the offender. But the people on the ground had seen it clearly.

My second sighting occurred when I positioned myself to execute a loop. Standard procedure for performing a loop involves setting up a ground reference for the start and finish. I lined up with a gleaming white house on the side of a hill. I hate to say it but the house looked “saucer-shaped,” and had little protrusions below it that seemed to be holding it to the side of the slope. I went up and over, came around the backside and pulled up level. But where was the white house I was supposed to end lined up with?  Boy, did you blow that maneuver: I thought to myself, and went on to the next figure. It was only when the “white object” was mentioned by Brian Hall did I consider what I might have seen.

At my lecture the audience seemed to be divided into those who had seen the white object and those who had not. A few comments were made, but I tried to keep the discussion to the subject of my aerial theater, ignoring my uninvited participant.

Since my wife and I were driving back to San Francisco, Bill Morehouse asked me if I would be willing to drop off a copy of the tape of my performance, featuring the UFO, at the local public radio station. When we got to the address I double parked and left Jeanne in the car while I ran up to the studio to drop off the tape. However, this was not the station’s plan. While I had been driving back from Sonoma, the station had been assembling a panel of UFO experts. I had arrived just in time; the show was going on live in the next half hour. An assistant was sent down to tell Jeanne where to park the car and to bring her up.

The panel included two of the country’s leading UFO experts, James Harder, who taught at Berkeley and Jeffery Mishlove, who would write up my experience in his book PK Man. We looked at the video twice before going on. The white object was not as clear as I remembered it. On the air the panel’s discussion produced many pros and cons. The one thing that Harder and Mishlove did agree on was that it was, up until then, the largest reported sighting by an assembly of people.

Stephen Poleskie’s writing has appeared in journals in Australia, the Czech Republic, Germany, India, Italy, Mexico, the Philippines, and the UK, as well as in the USA, and in the anthology The Book of Love, (W.W. Norton) and been nominated for a Pushcart Prize.  He has published five novels and two story collections. Poleskie has taught at The School of Visual Arts, NYC, the University of California/Berkeley, and Cornell University, and been a resident at the American Academy in Rome. He currently lives in Ithaca, NY, with his wife the novelist Jeanne Mackin.