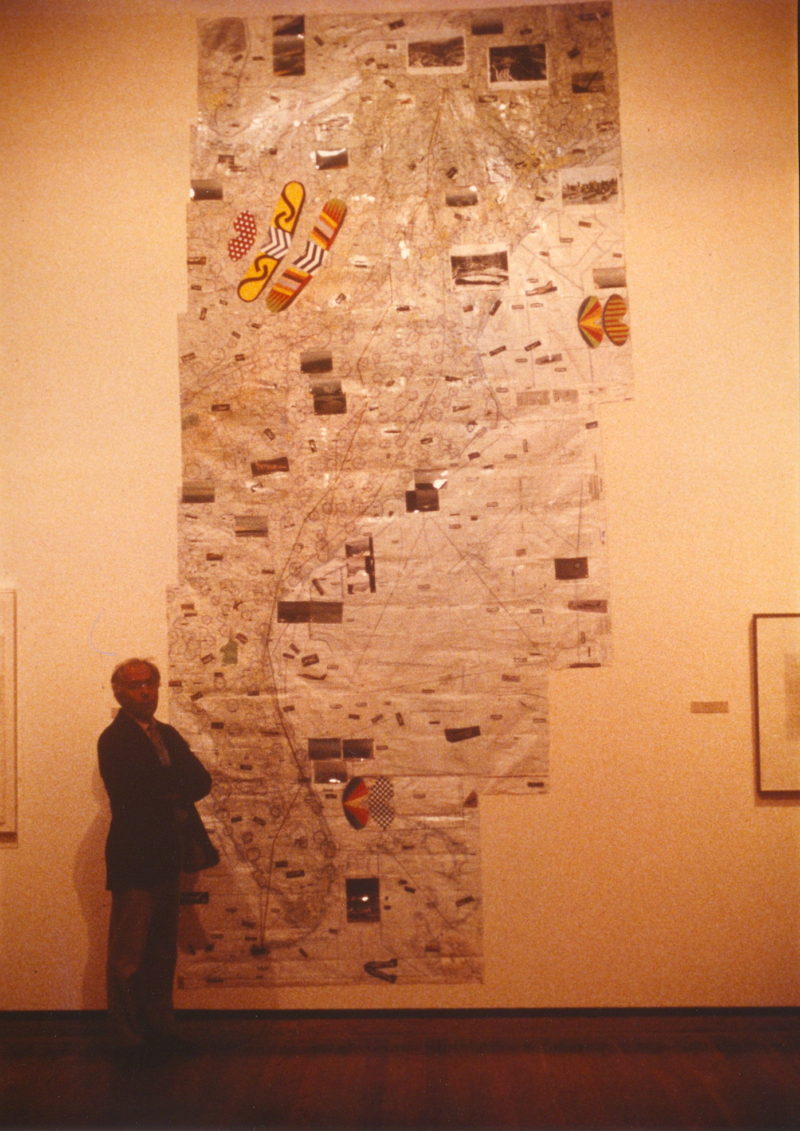 Why any artist would want to make a drawing that is five feet wide and fifteen feet tall I have no idea; however, that is me standing in front of my art work of this size in the photo above. I suppose if one’s other activities include making drawings in the sky, while flying an airplane trailing smoke, that are sometimes as much as three miles long, something measuring fifteen feet tall is no big deal.

The project began when I decided to make an art work documenting all the sky pieces that I had performed, or proposed to execute, over cities up and down the East Coast. As most of my drawings at the time incorporated aeronautical charts, called sectionals, for the area they were flown over, I ordered all the sectionals from Maine to Florida. When they arrived the package did not look all that daunting. However, as I began to unfold and paste these sectionals together, I soon realized that the finished project was going to be taller than the ten foot ceiling of the studio Cornell University provided me with at the time. I would have to work on the piece lengthwise, which was not the way the maps read, and sideways as I had envisioned it. I got all the maps glued together and began to proceed with the project, but it didn’t look the way it should. Maine was on my left, and fifteen feet away was Florida, on my right. That wasn’t how it was in reality. Maine should be in the north at the top and Florida at the bottom in the south. I plugged away at the piece for a while, but it just didn’t feel right.

This large room sat vacant most of the time, being used mainly for seminars and meetings. It had a huge table in the center of it, which I estimated to be at least ten feet long. I rolled up my drawing, carried it up there and unrolled it on the table. It hung over on the top, bottom and sides, but at least I could work on it without kneeling down and bending over too much. And so it went. I looked up the conference room’s schedule and popped in and out of the space to work on my giant collage as time allowed. I must admit people were beginning to stare at me strangely as I carried my large roll of paper up and down the stairs, often several times a day. I only taught two days a week so came in on my free time to work on my own projects.

After about three weeks of off and on effort the collage appeared to be done, or at least all the spaces that I wanted to fill in seemed to be filled. I titled the piece “East Coast Airplane Dance”. However, while I was very comfortable with all the various individual sections, I was rather unsure, never having seen it mounted on a wall, how it would hold together as a total work.

I had that opportunity when the collage was hung in the annual art department faculty show held across the street at the HF Johnson Museum of Art. At that time the faculty show was a major event and held in the main gallery, which stood two stories tall. Thus the viewers could not only see the full extent of the piece from the gallery floor, as seen in the photograph, but could look down on it from an open balcony on the floor above, which was the main floor. I must admit that I was pleased with the way it had been installed.

After studying the piece for some time, the first occasion I had to see it hanging in totality, I would say that I was content—or maybe I was just tired of it. I had no desire to add or change anything. In my mind the work was complete. As that was almost thirty years ago, I cannot recall what kind of reaction my drawing received from my colleagues, or the local art public. After the show closed, I rolled up my fifteen foot collage and slid it into a tube.

A year or so after that I was invited to have an exhibition of my drawings at the Anderson Art Gallery of the Virginia Commonwealth University in Richmond in connection with an aerial performance I would be doing there. I sent along my fifteen foot collage, but the gallery director wrote back that she was sorry she couldn’t include it in my show as the walls of her gallery were not tall enough to accommodate the work. The collage eventually made its way back to Ithaca, where it stayed in a tube in my studio at Cornell until the building was being renovated, and then it was moved to bay three of my three car garage, which had been converted into an art storage space. That was around 1999. And there the tube stood, leaning in a corner next to some large paintings, until the end of September of 2017.

For the past three years the art historian Inge Hinterwaldner has been working on cataloging all of my existing art work. She first came to Ithaca to see me when she was in this country as a visiting professor at the University of North Carolina at Chapel Hill. The next year she was at MIT so came again. For her third visit she had to travel from Berlin, where she is on the faculty of Humboldt University. This past September she came back for a fourth time, and brought Barbara Herrenkind, a Humboldt University photographer, with her. They planned to photograph all my larger works.  However, there was no way we would be able to hang the fifteen foot collage to photograph it. She would have to be content with existing photographs

After the two women returned to Berlin I was rearranging the things that had been moved. The tube with the fifteen foot collage had been laid down on the floor out of the way. When I went to stand it back up in the corner, I saw that what had been the upper end was missing its cover. I got some tape and was about to seal this end when I noticed that there was nothing inside. Where had my fifteen foot tall collage gone?

My first thought was that when the tube returned from Virginia I had not opened it to check the contents. But that was a long time ago. The woman who had been the gallery director back then had since moved on to the Houston Museum. She would not remember, or be able to check anything. My other thoughts were that someone had removed it when it was lying in my studio at Cornell, or taken it out when it was being transported. But who would want to steal a fifteen foot tall collage?

Having resigned myself to the fact that East Coast Airplane Dance was lost, probably forever, I e-mailed Inge and explained the situation, telling her to put “location unknown” after the collage’s citation on her list.

Shortly after that I was cleaning out bay two of my garage. This bay held artworks, along with books and manuscripts, also extra fans, space heaters, folding chairs, golf clubs, cross-country skis and unused exercise equipment. It additionally has a second floor, accessible only by a narrow open stairway. I don’t keep artworks up here, but mainly boxes of books, old carpenter tools, like hand saws, and a box full of the trophies that I won when I was a competition aerobatic pilot.

I had gone up there to sweep up the dust. When I moved the two boxes of carpenter tools, I was surprised to see something hidden behind them, stuffed into a corner below the eves. There wasn’t supposed to be anything back there. But when I pulled out the folded over roll of paper wrapped in plastic, there was my fifteen foot collage. How it got there I have no idea. I carried it back to bay three, slid it into its tube, and sealed the open end. Hopefully East Coast Airplane Dance will be there the next time I look for it.

Stephen Poleskie’s writing has appeared in literary journals and anthologies in Australia, Czech Republic, Germany, India, Italy, Mexico, the Philippines, and the UK, as well as in the USA, and been three times nominated for a Pushcart Prize.  He has published seven novels. His artworks are in the collections of numerous museums, including the MoMA, and the Metropolitan Museum, in New York, and the Tate Gallery, and Victoria and Albert Museum in London. He lives in Ithaca, NY with his wife the author Jeanne Mackin.