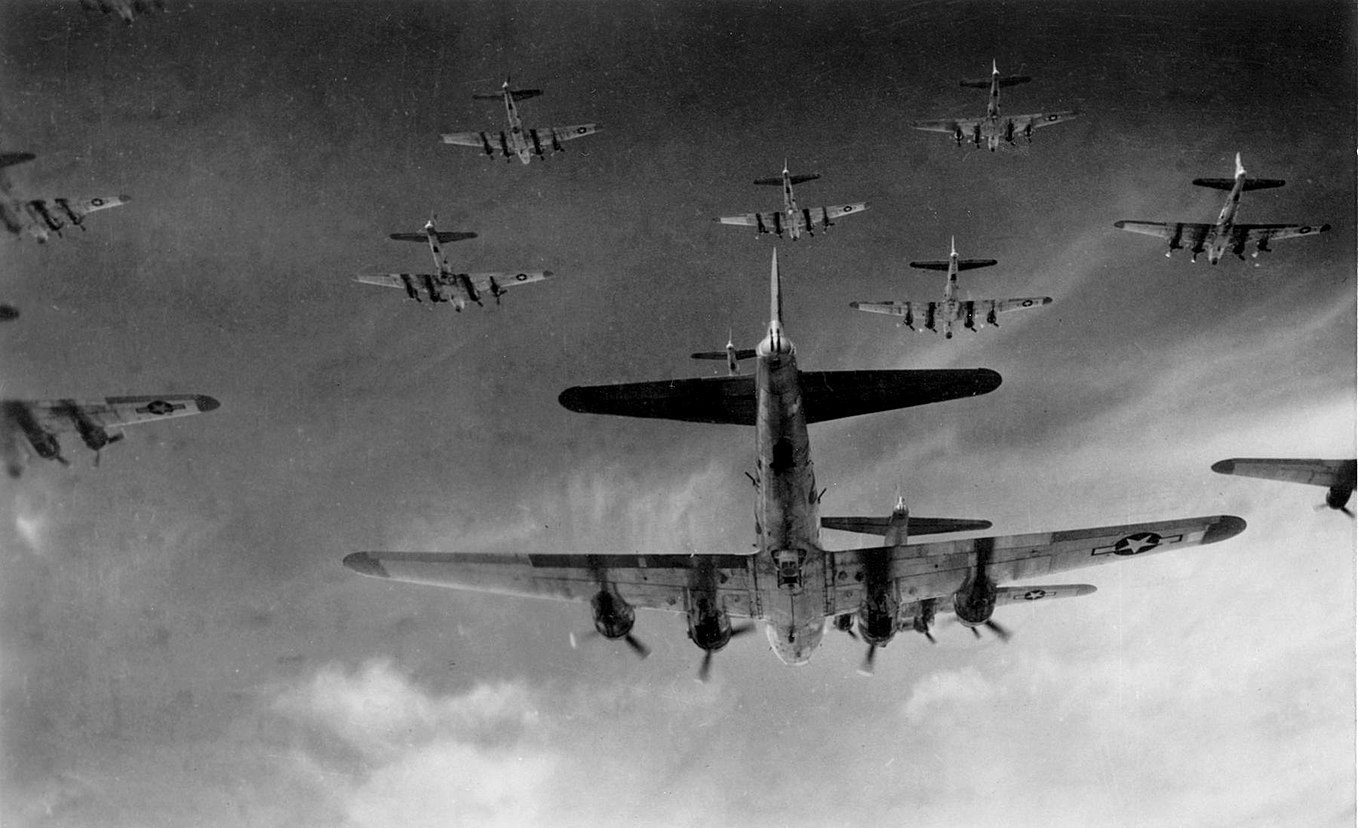 Boeing B-17, aka, The Flying Fortress on a bombing run during World War II

Will there be a war with Iran, or won’t there? Do they have nuclear devices? If so, do they have missiles capable of reaching our shores? Maybe they got them from North Korea. None of our cities have never been bombed; or have they?

When you reach the age of eighty-one you suddenly discover you have drawers full of file folders marked “Urgent” or “Immediate Response” containing paperwork that goes back a decade, or more. “Why is this piece of paper still here?” you ask yourself.

I was engaged in just such a clean-up activity the other day when I discovered an article that I had saved from the October 1994 issue of Aviation Digest. Why had I saved it? The article was about something I was not aware of back then, and have heard little of since. It was the night an American bomber accidentally dropped its load of bombs and wiped out a family of four in the Florida Panhandle city of DeFuniak Springs.

Looking up the incident on the Internet I found very little information about this strange event. It is not mentioned on the DeFuniak Springs Wikipedia page. I did find an article similar to the October one in Aviation Digest in the Los Angeles Times dated August 14, 1994.

According to both articles: Flares were sent up almost every night over the city of DeFuniak Springs during World War II as a prelude to the bombing runs at Elgin Air Force Base, just a short distance away.

On August 11, 1944, four shooting stars mimicked the flares. The Cosson family, gathered in their yard after dinner, heard the familiar drone of a bomber, and then the unbelievable whine of bombs. The 20-pound fragmentation bombs that fell on them, meant to scatter deadly debris on impact, killed Alfred Cosson, his brother James, and two of James’ children, 14-year-old James Jr. and 12-year-old Winnie.

Alfred’s son David and James’ sons, Frank and Thomas, were injured. So were James’ wife Annie Belle, and Alfred’s wife Pearl, who have since both died. According to the articles from 1994, the blasted house was long gone, and the farm had returned to forest. A sign, posted by the relatives, and apparently still in place according to the Florida Historical Society, relates the night’s toll.

Three Cossons who were at ground zero and survived the blast were still alive at the time of the articles in 1994. David, who had endured some 100 operations was paralyzed from the waist down. He lost one leg to infection. Thomas, who joined the Army at 17 to support his mother, later built up a construction business. Frank, who was initially rejected by the Army, Air Force, and Navy because of his bomb injuries, was subsequently drafted by the Army and made his career there. Frank retired after he was wounded in Vietnam, coming home without sight in one eye and hearing in one ear.

According to the articles, Frank has made his peace with his loss. He is quoted as saying: “If you go through life holding a grudge or hatred against somebody, it just eats you up inside.”

Alfred and Winnie had started running up the dirt road when the first bomb exploded between them. At least two more were to come.

Others of the party raced for the house. James Junior had just reached the front door when he was hit by shrapnel between the eyes. “It hit him so hard that it knocked his brains up to the window,” David was quoted as saying. He also described his Uncle Jim as, making it to the front steps where a piece of shrapnel caught him in the back of the head and spun him around three times. Every time he went around blood spewed on the porch.

David was on his uncle’s heels when shrapnel also hit him in the back of the head. He got up and a piece caught him in his back. “I guess it knocked me about three somersaults,” he related..

Nine-year-old Frank, who was on the porch, was hit in the abdomen. “I can still smell the smoke of the bombs,” he said.

His brother Thomas, who was four at the time, remembers something else.

“Even now I can get the smell of that blood in my nostrils,” said Thomas, who has a ten-inch shrapnel scar on his side. He’d been lying in bed when the bombs fell.

The next day, Army Air Force officials explained that one bomber’s release mechanism had hung up. Instead of falling three miles inside the Elgin Air Force Base reservation, the bombs remained attached until the device accidentally unjammed over the Cosson homestead, a mile and a half away from their intended target.

The military never identified the airplane or the pilot. David’s nephew Robert Mickler said that a nurse told him years later that the pilot had gone insane when he learned what had happened.

David Cosson, who had to give up his work repairing TVs because his nerves were too bad to allow him to hold a soldering iron steady, received $15,000 more in 1949. His nephew, angered at what he considered shoddy treatment, visited lawmakers and told the family’s story to the media. Subsequently, in 1980, Congress granted David a pension of about $18,000 a year. David Cosson said that he was grateful, but money wasn’t the point: “If everybody could just go through five or ten minutes of what we went through, there would be no wars.”

Fortunately, few people in this country have gone through David Cosson’s experience; however, we cannot say this for some people in other countries of the world. How many innocent civilians have been killed by our military drone strikes?  Many of these MQ-9 Reaper drones, on combat and surveillance missions over Afghanistan, are remotely piloted by members of the 174th Attack Wing based at Hancock Field, just a short drive up Route 81 in Syracuse, New York. How must it feel to go home to your wife and kids in Mattydale wondering if you might have destroyed, by mistaking them for a group of Taliban, a wedding party of innocent Afghan civilians?

Yes, let us have another war.

Yes, let us have another war.

Stephen Poleskie is an artist and a writer. His artworks are in the collections of numerous museums, including the MoMA, and the Metropolitan Museum, in New York.  His writing, fiction, and art criticism has appeared in journals in Australia, Czech Republic, Germany, India, Italy, Mexico, the UK, and the USA, and in five anthologies, including The Book of Love, (W.W. Norton), and been three times nominated for a Pushcart Prize.  He has published seven books of fiction and taught at a number of schools, including: The School of Visual Arts, NYC, the University of California, Berkeley, and Cornell University. Poleskie lives in Ithaca, N.Y., with his wife the novelist Jeanne Mackin. website: www.StephenPoleskie.com