Steve Poleskie and his screen prints at the American Center in Belgrade, June 1981

There has been a lot of comment in the news lately about Russia and its leader. This got me thinking about my trip there in the winter of 1979. At that time Russia was still part of the Union of Soviet Socialist Republics, and we were in the middle of what was called the “Cold War.” So what was I doing in the USSR? I was a warrior in a war that didn’t involve killing, but rather an exchange of cultural ideas, competitive if you will. They sent us dancers from the Bolshoi Ballet. The United States Information Agency responded with artists like Larry Rivers, George Segal and me, and the musician B. B. King who was in Moscow when I was.

At the invitation of The Union of Soviet Artists, the USIA circulated a show of my screen prints. I went along with the artworks, to give lectures, demonstrations, and have meetings with their official artists. During the month I was there, my exhibition and I traveled to museums and galleries in: Moscow and Leningrad (now Saint Petersburg) in Russia, Vilnius in Lithuania, and Tbilisi in the Republic of Georgia.  My print show was quite popular as it contained what could be considered “abstract art,” which was not sanctioned in the Soviet Union at the time. I was told that my “wing prints” were the first abstract images publicly exhibited in Moscow since the October Revolution of 1917. I will say that my presentations were quite well attended, that is everywhere but in Tbilisi. There two KGB men sat in a black car in front of the building my talk was in around the time it was scheduled to begin, and one entered. I gave my slide lecture to an empty auditorium.

Two years after my USSR tour the USIA arranged another traveling exhibition of my screen prints to the country then known as Yugoslavia. My show would open at the American Center in Belgrade and then travel to Zagreb and Ljubljana. Since the Belgrade show opened in June my wife, the author Jeanne Mackin, decided to take a vacation from her writing and accompany me.

We flew to Luxembourg and rented a car. Our plan was to drive across Europe to Yugoslavia and then down along the Dalmatian Coast. We would stop at some of the historic sea-side towns along the way; Split, Dubrovnik, and Ulcinj, and then travel on to Greece, before heading to Belgrade.

We didn’t know that Albania was closed to foreigners, or at least Americans, until we got to the border, so we had to detour around it to get to Greece. We stayed a few days in Thessaloniki, and then started back through Kosovo so as to be in Belgrade in time for my opening.

My wife was driving. Our map didn’t make any sense. We had just driven through several long, dark tunnels that had no lights inside. Jeanne announced she was having a nervous breakdown and pulled over. I took the wheel and continued along the narrow road we were on, hoping that it would eventually lead us to a town where we might get directions. As we drove on I saw that we were paralleling a major four lane highway. Unfortunately, there didn’t appear to be any access roads leading to it.

After a short time we came to a spot where the only thing that separated us from the highway, which had no guard rails, was an abandoned soccer field and a shallow bank. Rapidly running out of patience, I seized this shortcut and drove over the field and bounced onto the pavement. We were on our way, but where were we headed?

Strangely, there was no traffic traveling in our direction, which suited me fine as we were making good time. All the traffic coming the other way seemed to be military vehicles, a good many of them ambulances. Then I spotted a lone hitch-hiker. He would tell us where this road led to. I stopped to pick him up. Jeanne moved to the back seat so he could sit in front

The hitch-hiker didn’t speak English, and my Serbo-Croatian didn’t go far beyond basic polite conversation. He wouldn’t be of much help. We continued down the road in silence. All of a sudden our passenger, who had been intently observing the road ahead, began pounding on the dashboard, and shouting a word that sounded like what my Polish grandmother used to say when she wanted me to stop doing something I wasn’t supposed to be doing. I pulled over. About a quarter of a mile ahead the road appeared to be barricaded. Our hitch-hiker was looking around quite frantically. I wondered what was going on. Then he spied a dirt road off to the left a few yards on and gestured that we should go there. Why I obeyed him I have no idea. My mind seemed to believe there was construction up ahead and this was the way to avoid it.

No sooner had we pulled off and were bumping along the rough road, when our passenger threw his door open and leapt out of the moving car. He did a tuck and roll and disappeared, running into the tall weeds surrounding the road. Confused by what had just happened I could do nothing but continue on. Almost instantly we were met by a military convoy heading rapidly toward us; armored personnel carriers, followed by trucks loaded with helmeted troops and pulling cannons. Thankfully, the convoy had no interest in two people driving a Fiat with Luxembourg plates.

After a short while we arrived at a small town. There was a mosque and a market and goats in the street, but no signs in any language we could read. All we could do was approach people and say “Beograd” with a rather inquisitive tone. Most persons hurried away. Finally, we met a man who repeated the word Beograd, and pointed to a road that went up a hill. I thanked him in Serbo-Croatian and headed in the direction that he had pointed,

As we drove up the hill we could here popping noises, and what sounded like explosions in the distance. Never having heard it in real life, it sounded like the rifle and machine-gun fire I remembered from war movies. Reaching the crest we stopped, got out of the car and looked out over the valley we had previously been driving through. There, arrayed below us, a military battle was in progress, with flashes of light and puffs of smoke. From our vantage point it looked almost like a video game. We got back into our car and hurried away, unsure what was going on, but glad that we were not down there anymore.

We had not driven that far when we came to a crossroads. I’d not seen any other cars since we left the village where I had gotten pointed up the hill. I pulled over and was beginning to unfold my map, to hopefully make sense of where we were, when three men, wearing black ski masks and carrying Kalashnikovs, appeared in front of the car. They were pointing their rifles at us.

The man who seemed to be the leader said something to me in one of the many languages they used in this often divided area of the world. Using my basic Serbo-Croatian, which I learned later no one in Kosovo wanted to hear, I asked him if he spoke English. The man said one work; “passport.” Reluctantly, we handed ours over. He took them and walked back to the other two men. As the masked men conferred together, we considered that we might never see our passports again, in fact would we ever see tomorrow.

The leader came back and handed me our passports. He said, “tourists?” and then something I did not understand, but took him to be asking where we were going. I said “Belgrade,” and then repeated “Beograd.”

He replied “Pristina,” and pointed to the road that turned off to the left.

Yes, Pristina, it was on the way to Belgrade, I thought relieved. I thanked the man in English, Polish, Serbo-Croatian, and Russian. He grunted. The Russian seemed to please him. I couldn’t tell if he was smiling under his ski mask; but he waved his Kalashnikov, indicating that we should move on. I put the Fiat in gear and we hurried out of there.

We had not gone that far down the road to Pristina when we came upon a large billboard. The sign, facing to be read by people coming from the direction to which we were heading, and written in numerous languages, including English, announced that the traveler was now entering “a war zone” and should not get out of their car for the next how many kilometers I can’t remember. Of course, despite my wife’s justifiably nervous protest, I pulled over, brazenly hopped out of our Fiat and photographed the sign. 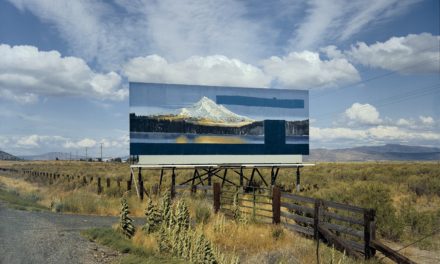