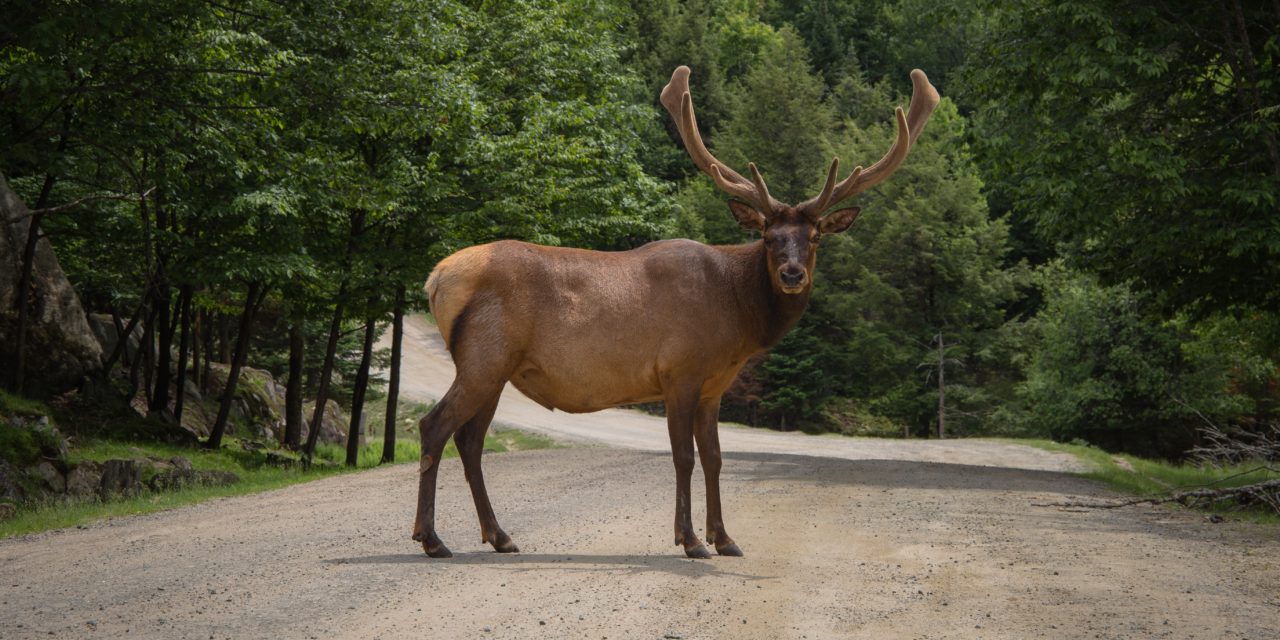 Photo by Jp Valery on Unsplash

Or would that be the singular ‘eye’?

Because the buck is in profile, mid-air, mid-leap across the highway, soaring in what seems slow motion, perpendicular to the direction I am driving, about to intersect my path.

It is Thanksgiving, early morning, frigid. We – my husband, Paul; my best friend, Wendy; and I – are driving four hours north from Westchester County to spend the holiday with Paul’s and my new in-laws, the Wilsons, outside of Syracuse. Our daughter Sofie and her husband, Nate, are already there. Sofie called to warn us about icy roads. But the sun is shining, and I am sure any hazard will melt.

I am excited for this trip, for the open road, the chance to go somewhere new. I love to drive. When I am alone, I listen to audio books or NPR or, sometimes, music that makes me sing out loud. It’s different when I’m with Paul in his car, a charcoal-gray Subaru, which is newer than mine and, he says, quieter and smoother, and which he prefers to drive. But his driving makes me nervous. I prefer to be behind the wheel.

Today we are in two cars. I’m leading the way, with Wendy beside me in the passenger seat and Paul following behind. The reason for this is that I am driving the 2001 silver Toyota Camry that belongs to my 91-year-old mother in Maryland, who recently gave it up. She is giving the car to Sofie and Nate, and for now they will keep it at the Wilsons’, and this will be the final leg of its journey. We are toting salad, roasted beets and potatoes and four bottles of red wine, all packed in the Subaru.

The deer emerges over the highway divider like a vision. Traffic on the four-lane road – Route 9A in Peekskill – is sparse, but even so, I don’t have time to check behind me to see if I can shift into the left lane. My eyes are locked onto the animal, gauging. My foot presses the brake pedal, and I slow gently. A second, a half-second – any measurement of time means nothing now, because I am moving forward, and the buck is moving sideways, and I know that it is inevitable: our trajectories will meet.

The instant of impact, like the quick moments leading up to it, is purely visual. I recall no sound, no jolting, no fear – just something that interrupted the flying deer and sent him careening off the car’s front right corner, arcing up and all the way over whatever delineated the side of the road and into the woods below.

“Gone” is my first thought. I am still staring straight ahead, ready to proceed with our journey as if nothing has happened. As if I’d run over a squirrel.

In the rear view mirror, I see a police car parked on the shoulder. I see Paul’s car pulling over, so I pull over, too. I watch in the mirror as he comes running toward us. I push the button to open my window. “Are you okay?” he shouts.

We are okay, but, it turns out, the car is not. I stay in the driver’s seat, and from where I sit, the hood looks untouched. But Paul heads to the front and leans down to take a look. “It’s a mess,” he says.

The police car appears beside us, and an officer emerges. She writes up a report – a deer collision is considered an “incident,” not an “accident,” important, she tells us, for insurance purposes. She advises us to leave the car in a nearby parking lot. “I wouldn’t drive it like that,” she says.

In the forlorn lot, I take a look. Headlights entirely gone, grille curved inward, metal crunched. “Fuuuuckkk!” The word surges from me as I clench my fists, furious at the deer, sad for my mother, who was so proud of the care that had gone into this car, so pleased that Sofie would have it. Just 48,000 miles and a brand new battery. A smooth ride. “Fuck!” I repeat as I stand in the cold.

We decide we will keep on going. We move everything that was in the Toyota into the Subaru and climb in, Wendy in back, me in the passenger seat, Paul driving. Within minutes, I am yelling at him. “You’re swerving!” “Slow down!” “Stop looking at the GPS and watch the road!”

And he is yelling back at me: “Susan, stop! Let me do the driving. Can’t you please stop talking?”

No, I can’t stop. I feel frantic; I have to protect us. The threat of another deer at every new turn is too much for me to manage, especially when I’m not driving. I am not shaking, but it occurs to me that I am more upset than I have acknowledged.

Shall we go home? Forget the weekend? Paul has been dreading the hours of the round trip anyway. The more we drive, the less I can imagine maintaining my guard against leaping dangers, especially as the roads become increasingly rural. I am, I realize, terrified. “I can’t do this,” I say.

So, still less than an hour away from home, we turn around.

Back at the house, I find room in the refrigerator for all the food we won’t be sharing at the Wilsons. Then, standing at the counter by the stove, maybe turning slightly to say something to Wendy, I feel my legs misalign and my body drop back and down, my knees bending under me, until there I am, on the ground, all of me. I get up quickly; Wendy has seen it happen.

What I long for is comfort: lying under the blankets on the couch, a fire in the fireplace. And that’s where I find myself, but there is no comfort. I am disappointed that we can’t spend the holiday with Sofie and Nate and the Wilsons. It was my idea to go to Syracuse. We hadn’t made plans for Thanksgiving, and when Sofie told me she and Nate would be with his parents, I suggested that we come, too. Now I must let go of my image of their brimming dining table, and of sitting beside Sofie, talking, laughing.

I think about making a meal – even buying a rotisserie chicken in the supermarket in place of a turkey – but I don’t want to get back into the car to go to the store, and Paul says he doesn’t like rotisserie chicken. He becomes fixated on finding Peking duck, but we learn that the only restaurants open on Thanksgiving are the ones that serve up all the holiday fixings at a premium price, and they are booked anyway.

I want nothing – not wine, not chicken, not Peking duck. We don’t play Scrabble. We don’t pull out a jigsaw puzzle. We don’t listen to music. Wendy keeps saying that we could have been killed, that I saved our lives. I like to think that’s true, but it doesn’t change the fact that here we are, the sky getting darker, the only food in the refrigerator the mounds of beets and potatoes and leafy greens that Paul says he also doesn’t like.

Paul is becoming increasingly grouchy; not even Wendy can elicit a smile from him. He loses himself by recreating his view of the accident on his computer. His detailed composition, set against a photographic representation of where we were on Route 9A, features the exact year and model of my mother’s car with a Maryland license plate that reads, thanks to Paul’s creative humor, “I’m Fucked.” At the front of the car, the buck is gigantic in the sunshine, upside down, its antlers like fingers, its legs reaching up to the sky. What is missing, I later realize, is me.

Around nine at night, we resort to going to the 24-hour diner that we’d never go to otherwise. Paul orders pulled pork; Wendy and I have chicken noodle soup. The food is terrible; Paul leaves most of his sandwich uneaten. Nearby, a long table is set with a white tablecloth and white plates and water glasses. As we are getting ready to leave, all the servers, dressed in black and white, gather around and sit together to share the holiday cheer.

Friends ask me if the buck was killed, and I tell them I have no idea because he flew over the side of the highway. Some express sympathy for the creature, and I wonder if there is something wrong with me that I feel none. All I can think to add is that I saw no traces of blood on the car.

The irony is that while my car struck a buck in Peekskill, up at the Wilsons’, Nate’s dad and a friend were stalking deer in the woods. When Paul calls Sofie to say we aren’t going to make it, they haven’t succeeded in killing one. But on Sunday they do – a big one, Sofie says. She refuses to share photographs of its body as they gutted, skinned and quartered it, but she does say that she and Nate returned home with a few choice cuts.

The first time I get into the car after the incident, I am nearly paralyzed by my relentless need to anticipate jumping deer. My driving slows; my breath clenches until I will myself to release it.

Weeks pass, a month, and sometimes I forget. I find myself cruising along, 70, 80 miles an hour, the way I used to.

Then one morning I sprain my ankle. Get my foot stuck between two chairs, and when I turn to go, it stays behind. The pain is frightening; I am sure I broke a bone. So I try to keep off it, hobble around for a while when I have to. I am blindsided, again, by how a momentary accident, in this case a literal misstep, can derail so much.

Now, six weeks later, I’m pretty much back to normal. Time has done that, just as time has swallowed my fear of driving, freeing me to enjoy the ride. Yet I am determined to remain vigilant. I take each step more deliberately, watch out for ice. I chide myself to slow down. I sit behind the wheel on the suburban roads that wind through our area, and I try to remember the potential of peril about to leap out at me.

Susan Hodara is a journalist, memoirist and educator. Her articles have appeared in The New York Times, Communication Arts, and more. Her short memoirs have been published in assorted anthologies and literary journals; one was nominated for a Pushcart Prize. She is a co-author of “Still Here Thinking of You: A Second Chance With Our Mothers” (Big Table Publishing, 2013).