His Back Yard: The City Farmer/by Don Wolfe 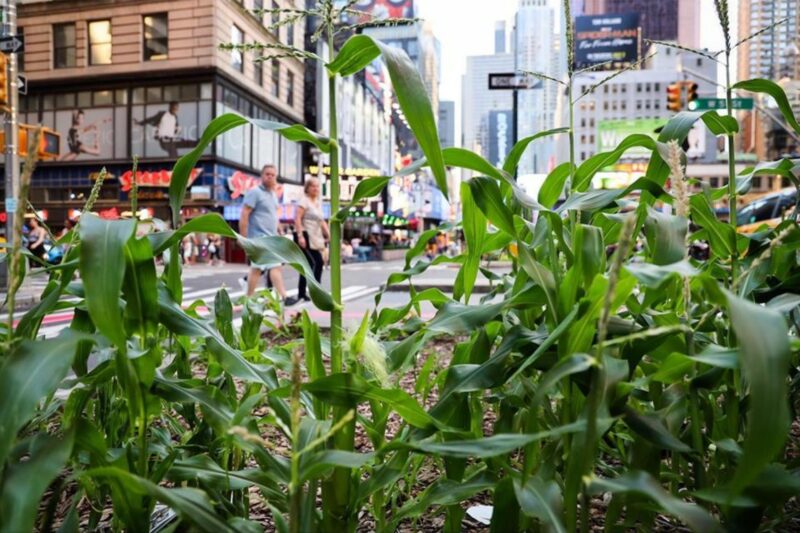 What transpires in the mind of a 73-year-old person to decide that it would be a good idea to plant corn in an unused patch of dirt in the middle of Broadway in NYC and become a city farmer? Beats the hell out of me!

The goal for summer of ’19 was to harvest just one ear of corn. If you love growing things as I do when I see any square foot of dirt in NYC my first thought is what can I plant.  My first two street gardens were planting daffodils, one of which got me written up in the NY Times. You would think growing corn would be simple. It is not, especially when you are on oxygen 24/7. First you have to order the corn. I tried to give some a head start on my windowsill in makeshift greenhouses. Then you have to buy the tools to dig with, and  find anyone to help you dig, but first you have to show them how to use a shovel, a talent I learned not everyone has. 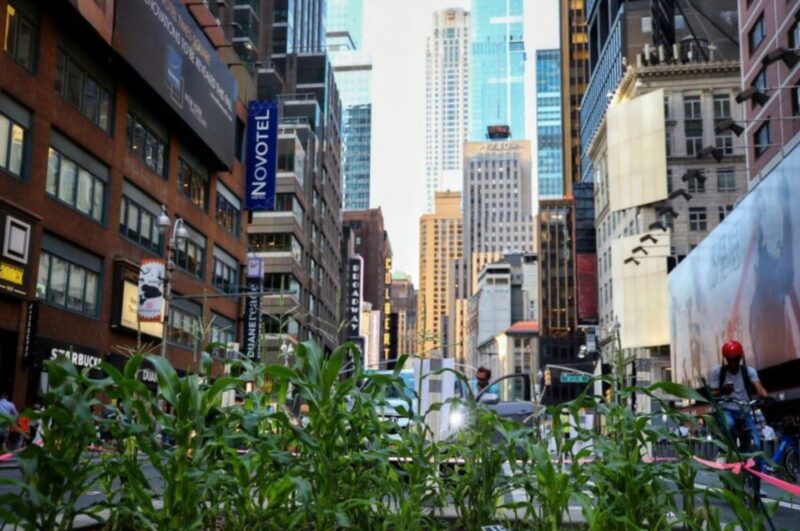 One of my planters was in town from Buffalo and the other is a teacher in the city. Corn planted in neat little rows spaced perfectly.  Months of planning and you look at your accomplishment and say WOW! You go back a few days later to check on things and realize someone has trampled half your corn. Problem solution — off to get stakes and rope to rope off your miniature corn field and it did seem to help.  Then for some unknown reason, all your corn dies, so thankfully you have back up and  once again have  to find someone to help you transplant again and you do this three times including planting just the seeds.

I would just sit there in my wheel chair and wonder why one kernel of corn would grow and another would not. Still don’t have the answer. The summer progressed and half the corn grew so I decided to fill the rest of the space in with pumpkins. The vines did really well but I never saw a flower turn into a pumpkin.  Went to check on things one day and there in the middle of my corn and pumpkins was a new tree planted by the city. Remember — this dirt stood empty for years, but this was the year the city decided to do something. About time.

Well, that was OK because they put the tree in the center where nothing was growing and amazingly did not disturb any corn or pumpkins.  The corn stalks were all stunted but some were showing actual corn on them and the pumpkin plants were taking over, as planned. I had achieved my goal of growing corn in the middle of Broadway, the same street that the Macy’s Thanksgiving Parade passed over for years. 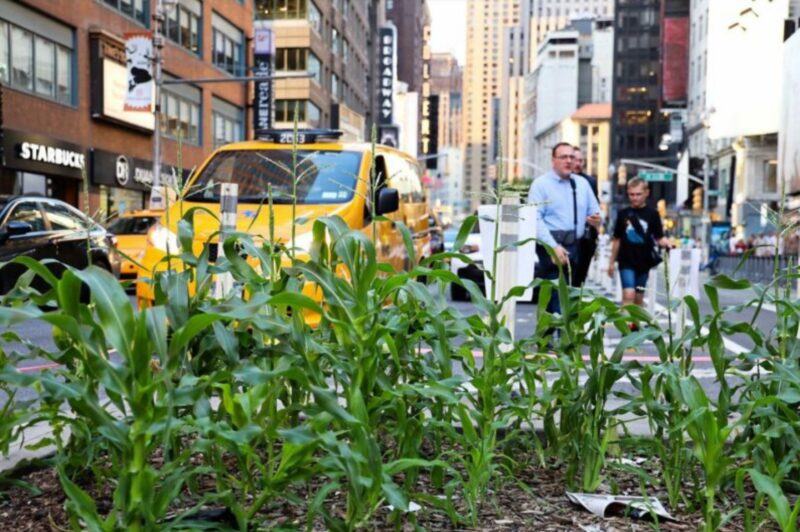 The special day arrived and I picked a couple of the biggest ears of tiny deformed ears of corn but I had achieved my goal with a lot of love and labor, and help even from the homeless man who took it upon himself to guard the garden, as that was his block. Well all things must come to an end, and they did when I went to check on the garden only to see the city in late September came and tore everything out. If one of the blossoms did turn into a pumpkin, only those who ripped them out will ever know.

I do ask myself what is it that every time I plant in a space that has stood empty for years, the city decides to come in and take over? I like to think I showed them how nice it looks when something is growing. In some ways it’s a good thing when the city takes over, because it is hard work and expensive to be an urban farmer.  Now this 73-year-old mind is on to the next idea. Stay tuned. And no, it won’t be about gardening.

Don Wolfe lives in midtown Manhattan where growing corn is as foreign an occupation as selling cheap watches is on Main Street in Endwell,  NY. Artist, lover of the City, and all-around good guy, Don’s found it’s easier and cheaper to just buy home-growns at Wegman’s. Not that we wouldn’t like to have seen what his pumpkins  might have looked like growing up absurd, fearful of getting hit by cars, walked on by passers-by and peed on by canines. We’re waiting to see what he comes up with next that takes him far afield.