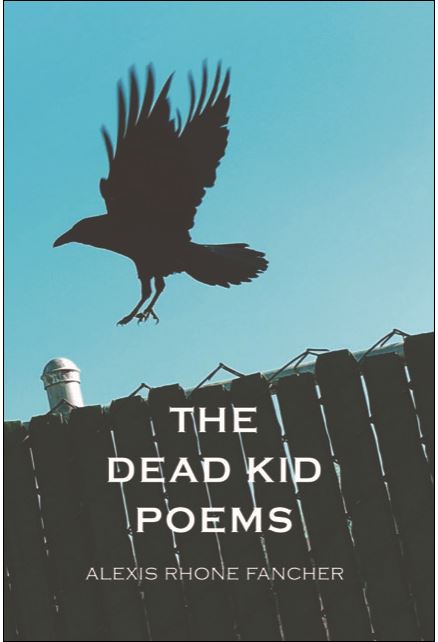 In Robert Frost’s poem, “Home Burial,” a man realizes that his wife can see the burial mound of their child framed through the window of their home. The window becomes a metaphor for the indelible anguish that comes with a child’s death. Her husband has turned to other affairs, but his wife cannot, telling him,

No, from the time when one is sick to death,
One is alone, and he dies more alone
Friends make pretense of following to the grave,
But before one is in it, their minds are turned
And making the best of their way back to life
And living people, and things they understand.

Living people, and things they understand—this line haunted me as I read Alexis Rhone Fancher’s new collection, The Dead Kid Poems, from KYSO Flash Press. In it, Fancher honestly and clearly lays out the experience of losing her son, and the staggering wreckage that a mother is left with after such a death. The book is a companion to Fancher’s earlier, also compelling collection, State of Grace: The Joshua Elegies

“If you had only / one child and he died, are you / still a mother?” Fancher asks in “Every Day Is Mother’s Day,” writing her reality, one that is incomprehensible to many of us who are mothers, who want to say of course you are, but then comes the problem of what to say if someone asks:

I was but he died.

Hard to say, harder to hear.

Or: No. I have no children.

Say it and then catch yourself:

In the poem, “When I Buried My Son I Became Someone Else,” Fancher writes, “I buried my son and now I don’t / know who walks on eggshells / the living or the dead, and sometimes I think / the dead one is me, especially when I look / in the mirror. I am coming to terms with mortality: mine/his.” Each poem in this collection nudges us into being more aware of the nature of death, reminds us that we are all walking on eggshells, puts us face to face with our own mortality and that of those we love, and demonstrates the thin, thin line that sits between this world and the next. In doing so, Fancher repositions death not as something to be hidden away, but as something that is inevitable. The last line of “Today, in her garden, my sister says, / This plant came from the birds,” illustrates the certainty of tragedy: “Don’t worry; this will turn out badly, / no matter what you do.” This is what it is. This happened. We want to turn away from these things, but Fancher reminds us we cannot, or if we do, we are just putting off what we will have to confront eventually.

Fancher’s poems brilliantly bring to the reader’s attention what remains when a mother loses a child (so much), and to the actuality that reminders are everywhere. Fancher finds that her son, Joshua, is everywhere, as in “Residuals: An Elegy,” where “Last night: the same commercial— / a boy’s first haircut, / soft curls / sheared, floating. / He could have been your understudy.” We see the image of Fancher’s son, Joshua, who has died, but who also lives in the poem, and again the threshold between what is here and what is not is blurred. The living begin to understand, and we are better for it.

In Frost’s “Home Burial,” the wife stands at her own threshold, the door: “she moved the latch a little,” but her husband tells her to “Close the door” and physically attempts to contain her, and even though she does end up opening the door, she never leaves the home in the poem. The home burial is that of the boy, but also that of the mother, who feels the weight of the death and cannot escape it. But Fancher refuses to be grief’s prisoner. In fact, the poems themselves are not containers of grief, but spheres or fields, something larger and more open to the possibilities of the world. She writes, in a heart-wrenching ghazal, “My Dead Boy,” how it would be easier sometimes to keep grief’s door closed: “Alexis! Stop turning everything red. / (I want to keep him safe inside my head.),” and yet she writes him into this collection, opening grief’s door, taking us out into grief’s field, so that grief is unearthed, not buried away, not locked away. This act of writing is a heroic one. Fancher bravely puts into words what seemingly cannot be expressed, and risks feeling the full spectrum of grief again and again for the sake of honesty, for the sake of us all. These poems are nothing short of miraculous.

The Dead Kid Poems isn’t just heartbreaking or beautiful, it is transformative and powerful. It asks us to reexamine what it means to talk about death and grief. In “Overdose,” Fancher brilliantly employs the persona poem to write about the things we say when someone is gone: “He did not pass away. / He died. / There is no plan. / Don’t say he is at peace,” but the poem doesn’t leave us in the dark about how to proceed, instead it offers, “Silence is good. A hug. / Tell me you have no words. / Or tell me stories of that summer / he rode the bulls in Ogden, / all that life tightly in his grip.” These poems are lessons in empathy. They are lessons in humanity. They ask us to open our eyes to what is, and in turn, take our own lives tightly in our own hands.

Fancher’s next to last poem in the collection is “Accustomed to Dead Kids,” which speaks directly and unapologetically to how accustomed we have become to school shootings: “I’ve grown accustomed to the rants, / the NRA and no we can’ts; / the maimed, the dead, / the platitudes instead / are second nature to me now, / like breathing out and breathing in.” The poem reminds us all that it is not enough to read and grieve; what we have done, what we do, and what we will do matters. These poems implore us to realize that none of our children is immortal and to act accordingly.

The Dead Kid Poems should be required reading—it’s that important. Fancher’s skill as a poet allows each poem to hold its relationships, its silences, impossibilities, and possibilities paradoxically with a firm, gentle grasp. In an afterword to the collection, Fancher writes, “My grief is not finite: eleven years and the poems about my boy keep coming.” I imagine Alexis Rhone Fancher in the “Home Burial” house with the wife in Frost’s poem. I imagine that she would have helped her unlatch the door, taken her hand and led her to that mound the wife could see from her window. I think Alexis would have sat with her in grief’s field, so each would know she was not alone.

Alexandra Umlas holds an M.F.A. in Poetry from California State University, Long Beach and an M.Ed. in Cross-cultural Education. You can find her work in Rattle, New Limestone Review, and Connotation Press, among others. She also serves as a reader for Palette Poetry.