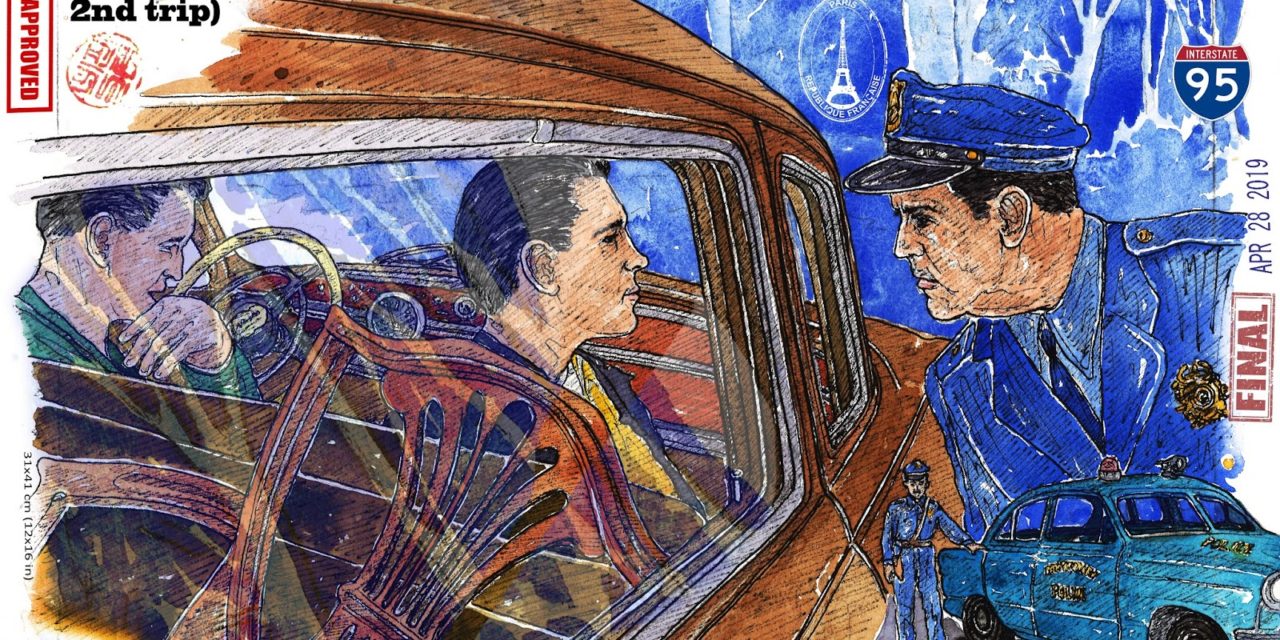 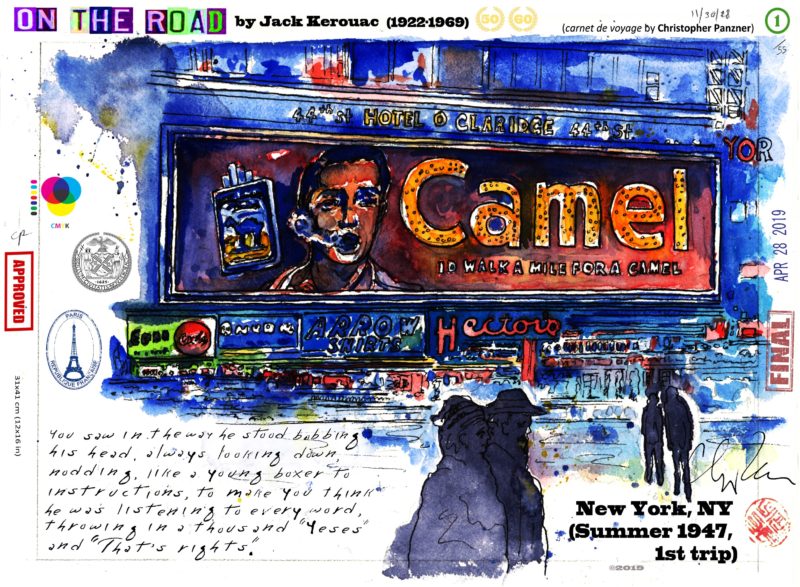 “The Illustrated On the Road,” by Jack Kerouac

The idea was to create a watercolor/ink carnet de voyage (travel sketchbook or “Moleskine”) to make it appear to have been done on the road while travelling with the real people in the book;

All of the real people — and in color — were used to show who they were in the book for each of the 55 illustrations (with younger versions of each to correspond to their age in 1948-50);

Images of the real people were as authentic as I could find according to my exhausting research;

All of the cars are authentic;

I took Jack Kerouac’s handwriting — fortunately, he always wrote in block letters — from his letters and notes to make an alphabet and then used that to quote him in his own handwriting;

The location of each illustration shows where Jack was when he wrote the quote from On the Road (New York, San Francisco, Los Angeles, etc.), including on what trip he based the experience from: Summer 1947/1st trip, Winter 1949/2nd trip, Spring 1949/3rd trip, Spring 1950/4th trip;

The roads he was on for each quote is included (based on maps of his trips) or the city seal of the big cities he spent time at or passed by on his trips (New York, San Francisco, Chicago, etc.);

Jack Kerouac’s date of birth is on each illustration (1922) for this fiftieth year (1969) after his passing, the illustrations an homage to his classic On the Road;

All of the buildings, clothing, cars/buses/trucks/tractors/trains/etc., props, decorations, signs/logos/advertisements/street signs/etc., are actual places from historical information (like Mill Valley or “Birdland,” for example), from 1948-1950 (or before);

I’ve included my own 60th birthday (“60”), this year and the date that each illustration was done, the date all was finished (April 28th 2019), copyrighted “2019,” with my own Asian stamp, a stamp of the Eiffel Tower (all of the illustrations were done in Paris, a wink to Kerouac’s — Jean-Louis Lebris de Kerouac (Kirouac) — French-Canadian roots, his family was originally from Brittany, Huelgoat, but a hamlet in the commune called Kerouac (Breton: Kervoach) has been established as the source of the name of the American writer Jack Kerouac), the original dimensions of the illustration, and a “CMYK” reference for accurate color correction for printing, with each corresponding number of the fifty-five works, and signed — with approval of artist’s proof and “FINAL” for the master — and “carnet de voyage”);

Some effects like lightning, rain, headlights, street lamps, snow, sparks, etc., were added in Photoshop (with color correction on all of the illustrations to give them uniformity and/or continuity). 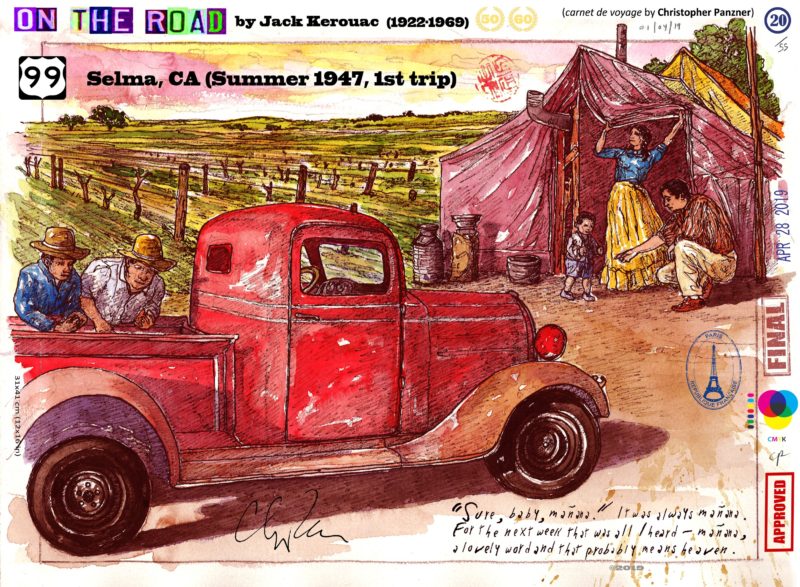 OTR 20 (p 94): “’Sure, baby, mañana’. It was always mañana. For the next week that was all I heard— mañana, a lovely word and that probably means heaven.” 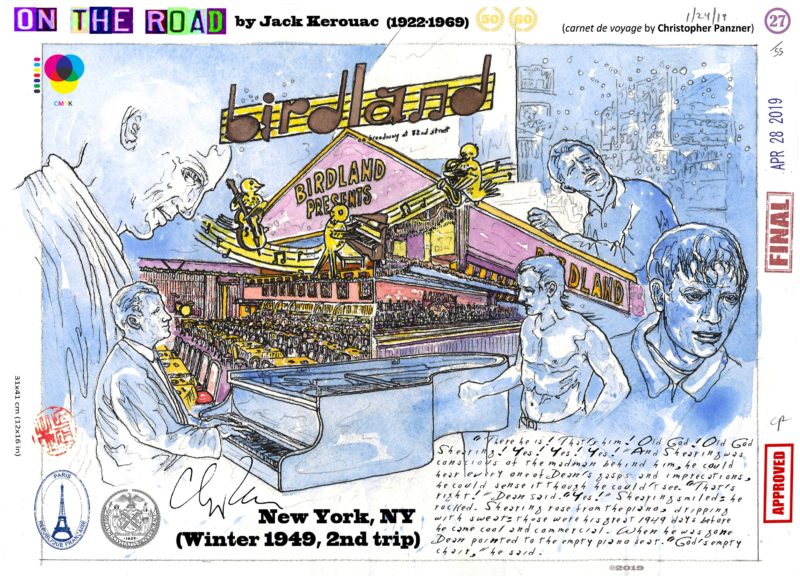 OTR 27 (p 128): “‘There he is! That’s him! Old God! Old God Shearing! Yes! Yes! Yes!’ And Shearing was conscious of the madman behind him, he could hear every one of Dean’s gasps and imprecations, he could sense it though he couldn’t see. ‘That’s right!’ Dean said. ‘Yes!’ Shearing smiled; he rocked. Shearing rose from the piano, dripping with sweat; these were his great 1949 days before he came cool and commercial. When he was gone Dean pointed to the empty piano seat. ‘God’s empty chair,’ he said.” 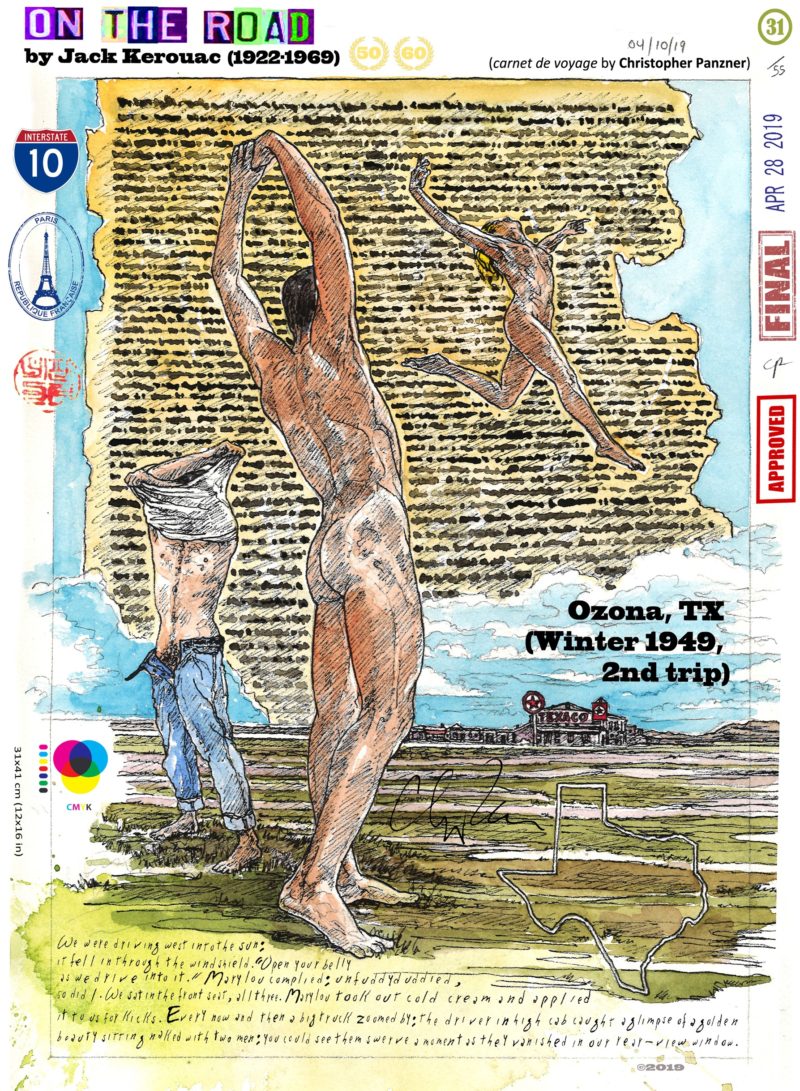 OTR 31 (p 161): “We were driving west into the sun; it fell in through the windshield. ‘Open you belly as we drive into it.’ Marylou complied; unfuddyduddied, so did I. We sat in the front seat, all three. Marylou took out cold cream and applied it to us for kicks. Every now and then a big truck zoomed by; the driver in high cab caught a glimpse of a golden beauty sitting naked with two men; you could see them swerve a moment as they vanished in our rear-view window.” 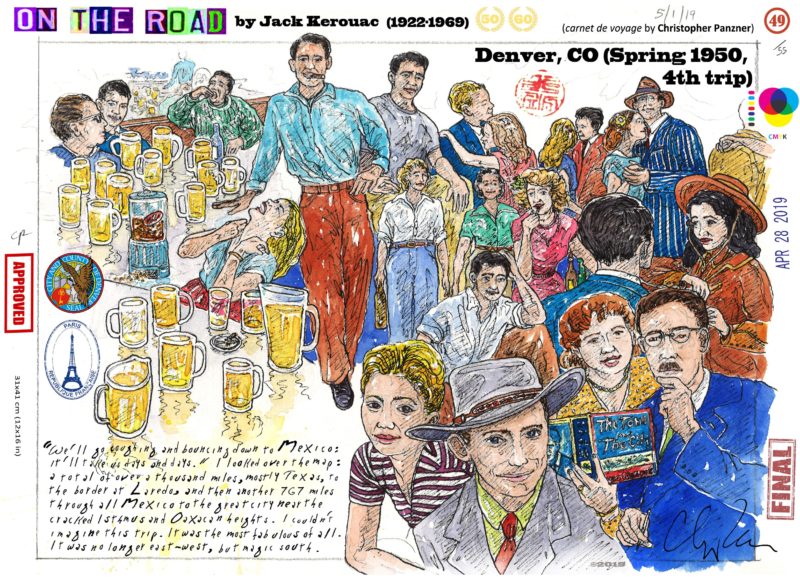 OTR 49 (p 265): “’We’ll go coughing and bouncing down to Mexico; it’ll take us days and days.’ I looked over the map: a total of over a thousand miles, mostly Texas, to the border at Laredo, and then another 767 miles through all Mexico to the great city near the cracked Isthmus and Oaxacan heights. I couldn’t imagine this trip. It was the most fabulous of all. It was no longer east-west, but magic south.” 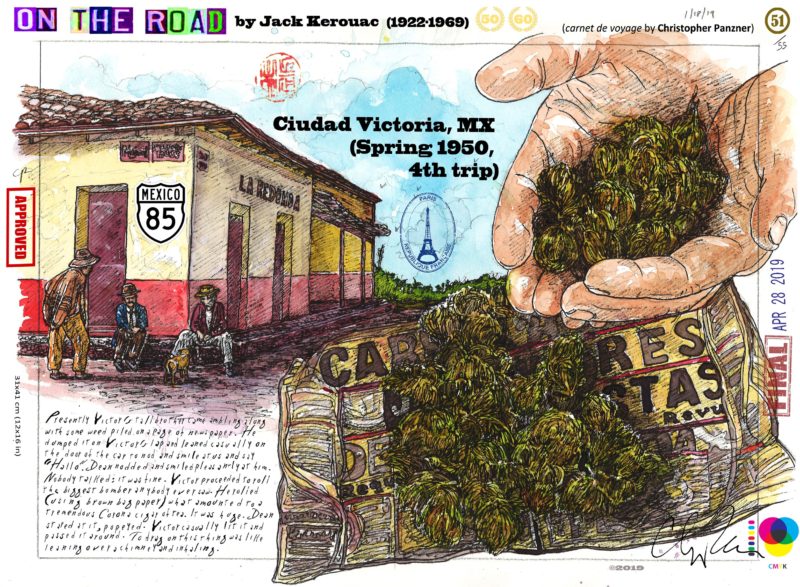 OTR 51 (p 283): “Presently Victor’s tall brother came ambling along with some weed piled on a page of newspaper. He dumped it on Victor’s lap and leaned casually on the door of the car to nod and smile at us say ‘Hallo.’ Dean nodded and smiled pleasantly at him. Nobody talked; it was fine. Victor proceeded to roll the biggest bomber anybody ever saw. He rolled (using brown bag paper) what amounted to a tremendous Corona cigar of tea. It was huge. Dean stared at it, popeyed. Victor casually lit it and passed it around. To drag on this thing was like leaning over a chimney and inhaling.” 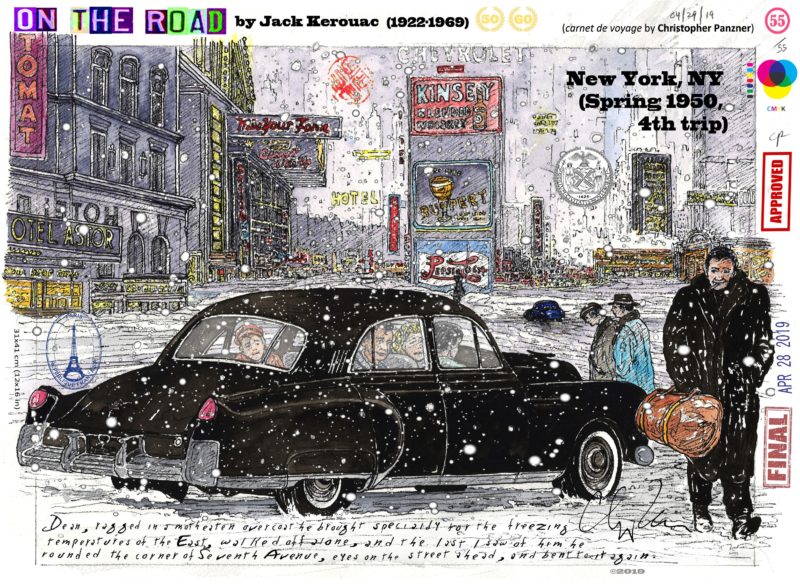 OTR 55 (p 309): “Dean, ragged in a motheaten overcoat he brought specially for the freezing temperatures of the East, walked off alone, and the last I saw of him he rounded the corner of Seventh Avenue, eyes on the street ahead, and bent to it again.”

Full disclosure: Panzner and editor Mike Foldes collaborated on a project, Panzner’s “Fashions & Passions”, for which Foldes provided poems inspired by each of the altered images. You can see the series here: https://www.pinterest.fr/indigo9461/fashions-passions/ 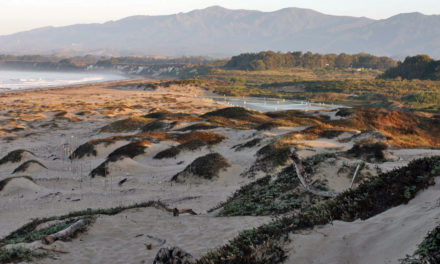