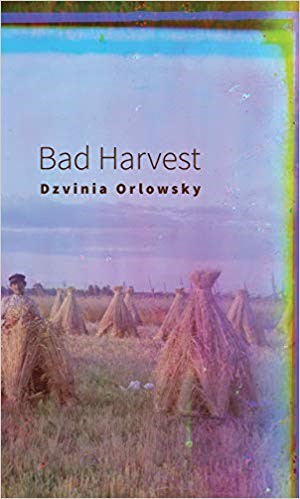 THE MEMORY OF OBJECTS

A poem can depict a memory the way a photograph or an object can. It can be part of postmemory, in which the poet writes about the memories that have been passed down to her. According to Marianne Hirsch, a scholar of memory studies, “post memory is distinguished from memory by generational distance and from history by deep personal connection.” In her new collection Bad Harvest, published in October 2018, Dzvinia Orlowsky writes about history and family and the way the two are interwoven. These themes have been present throughout her work, A Handful of Bees (Carnegie Mellon University Press, 1994) and Silvertone (Carnegie Mellon University Press, 2013.) They are present in not only the psychological idea of memory, but also the physical objects that trigger and preserve memory.

In an interview Dzvinia notes, “The poems in Silvertone examine the psychological and emotional we give objects that fill or sometimes clutter our lives, objects that give us comfort, give heft and shape to traditions, family mythology — large concepts that otherwise are profoundly and utterly shapeless. They can also serve as our tokens to the past.”

This past spring I read with Dzvinia at an event titled “Memory Imaging” at a new venue in Marshfield, Massachusetts, called the Red Barn. The title reflected the idea of the poem as the image or object, an idea I experimented with in my collection Memory Project 41 (Underground Books, 2018.) I realized that her poems were also about memory and I could relate to them when suddenly her memory became mine as I listened to them. Hirsch points out that this transference of memory can occur with postmemory.

Dzvinia and I connected through memory. We both had memories that were passed down to us by the Ukrainian sides of our families. Our collective memories were clearly identifiable. They involved Ukrainian churches, Saturday school, and Ukrainian dance groups. For both of us, these memories blurred within an American landscape. Finally, we became American first and Ukrainian second.

The first event that involved memory was sponsored by Queens Council of the Arts at the barn at Queens Farm, made into a performance space, where I read poems and translated some of those poems into dresses. For example, one of the dresses was embroidered with an old map of Kharkiv, the city from which my grandparents’ came. This was a process of translation, just like the process of translation from Ukrainian American to American Ukrainian. This event took place before Dzvinia and I connected.

Shared memory prompted us to create new memory in a second event at the Red Barn. In this new memory the creative force behind Red Barn was included. Robert Frigault strived to bring our memories to life as objects. I sewed six white dresses that hung from the ceiling like spirits in the space. With projected images on them, they were to represent those women who had been left behind and had become memories: my great aunts.

Dzvinia showed a film produced by her son, Max Hoffman, titled “Silvertone,” which was featured at the Kinofest NYC 2013 Festival. In this trailer for her collection of the same title, Dzvinia reads the title poem with accompanying family archival photographs from 1945-1955. To this, Robert added special lighting effects as well as engaged a local guitarist to play softly in the background creating a more immediate presence — the visual echo of Dzvinia’s father as he may have appeared playing the guitar — in tandem with the past. The remainder of Dzvinia’s reading focused on her new collection, Bad Harvest.

“Bad Harvest” is a sequence of poems in the collection. This sequence is the heart of the book. The prose poems that begin the book, open up into free verse that leaves a lasting impact. The title refers to the 1932-1933 man-made famine in the former Soviet Union in which, according to historian Anne Applebaum, 3.9 million Ukrainians perished. An example of the way Dzvinia creates vivid images is in her poem “The Weakest of Children,” in which she writes, “what part of another’s flesh/ do you ask permission/ for your body to be freed of hunger.” The trajectory of the sequence “Bad Harvest” follows the experience of hunger. The most shocking is the poem “Want.” “Come out we have a doll for you,” fragmentizes testimony of the way the neighbors beckon in their uncontained hunger, the desire for it to be fulfilled in any way. Another image of hunger is in “Shortly Before Death” in which she writes, “silk plums of your bruised feet split.” The body becomes a fruit; the body transforms into what is desired.

Susan Sontag refers to photographs in Regarding the Pain of Others saying that they “are a means of making ‘real’ (or ‘more real’) matters that the privileged and the merely safe prefer to ignore.” This is the purpose of the poem, which Dzvinia emphatically fulfills. The poems create vivid images that immerse readers in hard truths. The pain of others is the pain of her loved ones.

These truths are sometimes passed down from generation to generation, creating postmemory. Again, the poems can be compared to images. Hirsch writes of the “missing pictures of my grandmother have stayed with me as pointed signifiers of loss.”

The poem “Losing my First Language” is about losing part of this postmemory. Dzvinia writes about slowly forgetting something that has been passed down to her.  She feels her Ukrainian vocabulary diminishing so that she can only remember certain expressions. In “Fortieth Day” she is conscious of being one of “those of us left behind” with the task of remembering.

In the poem “Hope Was a Thing With Pink Feathers: Oksana Baiul,” the hope is to bring recognition of the past in the present, but the hope is dashed when officials spend time searching for the Ukrainian national anthem. The speaker of the poem waits for this reaffirmation of the Ukrainian culture that has been passed down to her. The officials finally find the anthem after a heartbreakingly long time.

One of the most poignant poems in the collection outside of the “Bad Harvest” sequence deals with an object as a memory, “Mahogany Box.” The mahogany box is filled with baba’s ashes that can be driven home in the front seat of the VW Bug convertible, a lovely combination of sadness and the ability to move on.

While first and second generation poets take on the task of preserving their immigrant parents’ memories, other poets such as prominent Ukrainian poet Serhiy Zhadan are in the process of creating memory. The war in Ukraine has brought his poems into the present in his newest collection What We Live For, What We Die For (Yale University Press, 2019,) translated by Virlana Tkacz and Wanda Phipps. The lines that Dzvinia writes are locked in history, whereas Serhiy writes lines in the present moment like that also stress the importance of objects in creating memory:

Take only what is most important. Take the letters.
Take only what you can carry.
Take the icons and the embroidery, take the silver,
Take the wooden crucifix and the golden replicas.
By taking these objects, the speaker is also taking memories.

Dzvinia’s poems reflect the memory of a time that was passed down to her through her family. Readers will be taken on a poignant postmemory journey to experience a historical personal past in Dzvinia Orlowsky’s Collection Bad Harvest. This may inspire readers to think about their own postmemory, reaching beyond themselves.

Pushcart prize poet, translator, and a founding editor of Four Way Books, Dzvinia Orlowsky is the author of six poetry collections published by Carnegie Mellon University Press including her most, BAD HARVEST, recently named a 2019 Massachusetts Book Awards “Must Read” in poetry. Dzvinia is a founding faculty member in poetry of the Solstice Low-Residency MFA in Creative Writing of Pine Manor College, a creative writing lecturer at Providence College and is the founding director of “Night Riffs:  A Solstice Magazine Reading and Music Series.”