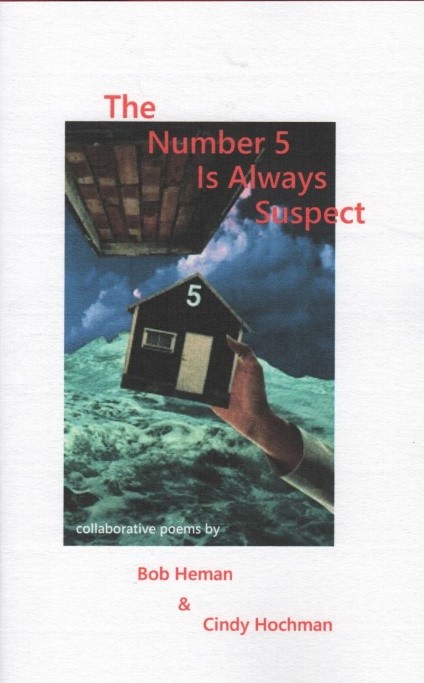 THE NUMBER 5 IS ALWAYS SUSPECT

“Oh, don’t try to figure out the calculus of poets,” Poem #23 in Bob Heman and Cindy Hochman’s collaborative chapbook The Number 5 Is Always Suspect, from Presa Press, warns us, but the calculus of these two poets is clear.

Stop at the fourteenth line.

As in good improv, these poets add new (but not radically new, not incongruous) content to their lines. Thus, this is a book of 24 fourteen-line poems, all versions of an Exquisite Corpse exercise played with two writers only, each writing not blindly but responsively to the line (almost like a prompt) that came before.

The poems are playful, often charming, aware of their shape and especially their endings, which typically ring a change, offer an alternative, assert a contradiction, or initiate a twist, as these examples illustrate:

Maybe this list contains too many things.
Nonsense—it doesn’t even contain a bear.

But the first rule of poetry is that rules must be broken.
But the rules relating to numbers are a lot less flexible.

But soon it was time to reach for the string and marbles.
Though it was just a game, there were no survivors.

nor the page you just read in the book of love
that remains too difficult to understand.

Love is not a peach, is not a mirage
but if you’re lucky you’ll get to take a bite

The alternating voices à la Diderot are most evident in Poem #5, which begins, “Only ordinal numbers are allowed in the poem.”

Does that mean that ordinal numbers are destined to repeat themselves?
No—they are usually more of a sequence.
Do you mean like the wives of Henry the Eighth?
Yeah—except the last one is not as obvious.

The voices alternate attractively and have suggestive personalities here, but, alas, the coherence of these two personalities does not extend throughout the volume. Most obvious in the enjambed lines, the distinct voices melt into each other, as in:

The poems have plentiful examples of alliteration (” as we wade alone through the muck and the maelstrom,” Poem #7), assonance (“he’s a lapsed cabbage,” Poem #13), parallelism (“the clopping of horses and the lowing of cows” Poem #7), wordplay (“caught between angles and angels and art,” Poem #6), and often demonstrate a fecund imagination:

The kinds of money they accumulated included colors and lizards and adverbs.
[Poem #22]

The book also has a pleasing symmetry: the last line of Poem #1 and Poem #24 each contains the word “bear.”

But my favorite part of the book, however, was not its lightheartedness or fey surrealism, but its lines of unexpected pathos, lines where the real world pokes in its ugly nose.

the grown-up world is all flesh and cruelty
[Poem #16]

But what is real in these shipwrecked days?
[Poem #2]

If you agree that the world today could use more collaboration, buy this book. It will remind you that cooperation and goodwill are still possible and still healing.