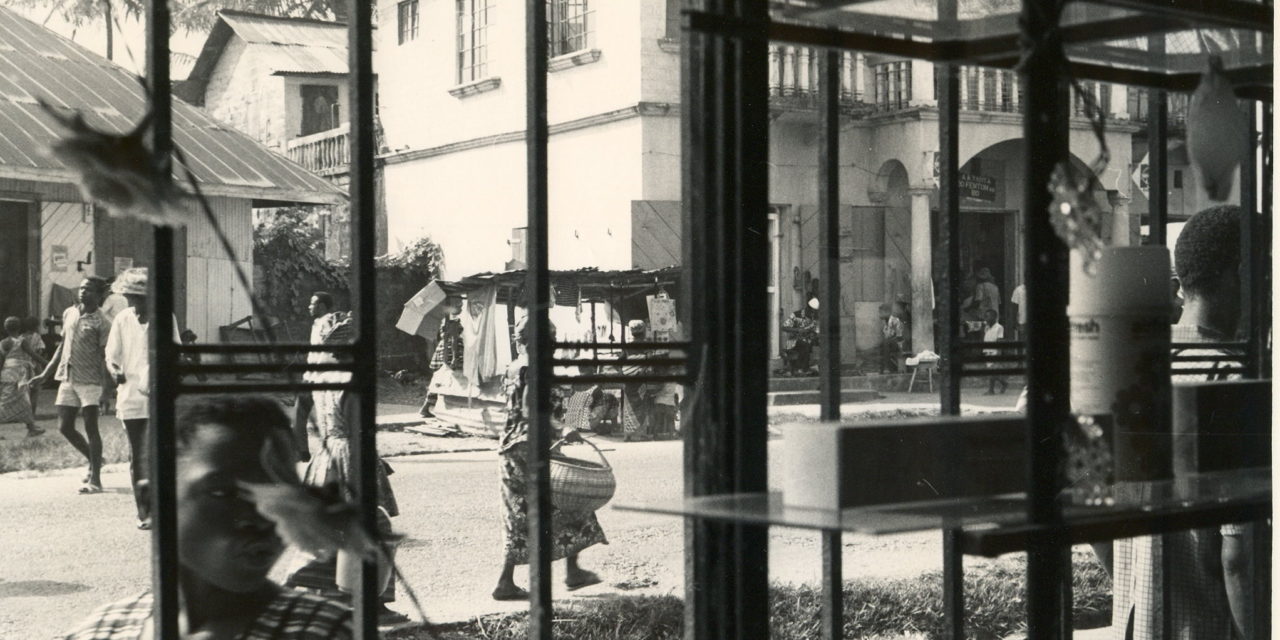 … I am sitting in the airport lounge in Freetown, Sierra Leone waiting for my flight out of the country, when I am approached by a large black man wearing a colorful dashiki, who introduces himself as a “Freetown plainclothes officer.”  Involuntarily I blurt out, “Plain clothes? They look like pretty fancy clothes to me.”

“What’s that you say, man?” The officer’s voice is stern. I catch a note of suppressed anger.

“Nothing, never mind,” I say realizing that my spontaneous comment was inappropriate, and had not been taken as the joke it was meant, but it is too late to retract what I had said.

“So you think it’s funny the way we Africans dress?”

“Don’t humbug me, funny boy, We need to go down to the office and have a little palaver to figure out just exactly what you did mean,” the plainclothes officer says.

I try to protest. “Look, I have a plane to catch.” And then thinking that I have gotten his message, I reach for my wallet. “What is it you want . . . a dash? How much?”

“Oh, ho!” the plainclothes officer shouts, almost gleeful. “Now I have you, boy . . . on two charges: insulting an officer, and attempted bribery of an officer.”

“This is madness,” I say. “I was just sitting here minding my own business, when you came up to me. So I made a bad joke. I didn’t mean anything by it. And I have been in this country long enough to know that everyone here takes bribes, from the top on down. In my two weeks here I have had to pay more than a few myself.”

“You are wrong my friend. Unlike in your decadent country there is no corruption here in Sierra Leone. Now you had better come along with me.”

“Don’t be absurd!” I shout. “I’m not going anywhere but to the telephone to call the U.S. Embassy.” Then I feel the muzzle of an assault rifle prodding me in the back. I have failed to notice that one of the gun-toters in camouflage has snuck up behind me. Saying no more, I follow the officer in the dashiki down the hall. Overhead I hear the roaring whine that signals the arrival of my flight, which originated in Monrovia, and then stops to pick up passengers in Freetown, and Banjul, before continuing on to Lisbon.

“Take off your clothes, boy, everything!” The plainclothes officer scowls at me once we are inside the small, concrete space he calls his office, ignoring the name on my passport.

“We know you have been up in the bush where the diamonds are,” the man says, seeming to smack his lips. “You may have some illegal stones hidden on you. We are authorized to do a full body search if we suspect someone. So do as you are told now and get out of your clothes . . . boy.”

As I slowly remove my garments in that small, hot room, while the officer and the guard smoke cigarettes and watch me, I am more conscious of my body than I have ever been before. No, I am not shy. In my travels I have undressed in front of strangers at many nude beaches, and in the Englishergarten in Munich, without feeling embarrassment. Now, stripping off my clothes one at a time and piling them on the dirty table, while two sets of dark, blood-veined eyes study me closely, I felt naked. It is as if not just my body, but my whole, white, physical presence is being put on display.

“Face this here way boy, we want a palaver with you,” a voice spoke rudely from behind me.

Turning from the cover of the table, I face my interrogators. I notice, for the first time, they are both from the tribe that is tall and has long features. There are two main tribes in this country, Mende and Temne and they do not especially like one another. I had stayed in an area where the people were mostly short and round-faced. These people had warned me to watch out for the tall, long-faced people; they said that long-faced people were not to be trusted.

“What is going on here?” I blurt out angrily. “Are you guys perverts or something? The U.S. Embassy is going to hear about this!”

“We have work to do,” the officer in the dashiki commands from the chair he is sprawled in. “Bring that table over here so I can finish writing my report.”

With a quick swipe of his gun butt, the guard shovels my clothes onto the dirty floor. Then he picks up the small table and carries it across the room, making a point of treading on my garments as he does, thoroughly embellishing them with the footprints of his dirty soles.

“Hey! Look what you’ve done to my clothes,” I shout, becoming as indignant as a naked man standing and facing two hostile armed men can become.

“Ha, ha, hah,” the plainclothes officer laughs. “Don’t get so angry . . . the man is only decorating them for you. Perhaps he thinks your clothes are too plain. He is making them fancy.”

Having a good laugh now, the officer applauds as the guard, encouraged by the officer’s comment, chants something unintelligible while performing a mock bush dance on my wardrobe.

“He is checking your clothes for diamonds. He can feel the hard stones through his boots,” the officer jokes. Then he seizes me by the jaw. “Now, open up your mouth, boy.”

“I said open up your mouth. I have got to check it. Sometimes diamond smugglers stick a stone in a wad of chewing gum and hide it under their tongue. But you wouldn’t know anything about that would you now?”

I taste nicotine as the officer runs his fingers underneath my tongue. His action causes me to gag. He withdraws his hand from my mouth and wipes the saliva on my hair, and then he digs in my ears.

A discreet knock sounds on the door.

A man enters, one of those in the dark blue uniforms who had been lounging around the customs desk. Apparently embarrassed by my naked state, he steps back a pace. I stand there trembling, wondering what is going to happen next. The man who has come in is shorter, his face a little rounder. He speaks to the plainclothes officer with almost guarded words: “Sir, the airplane to Lisbon is preparing to take off. As this gentleman is the only departing passenger, I would need to know if he will be going on board.”

“Yes, he can leave; we have found no diamonds on him. He will be along as soon as he gets dressed,” the plainclothes officer announces, waving his hand and dismissing the shorter man in blue. Reaching in the pocket of his dashiki, the officer takes out a pack of cigarettes. Without saying anything he holds out his hand and offers me one.

“No thank you, I don’t smoke,” I say, balancing on one leg as I struggle into my trousers. The officer and the guard light up. I am reminded of a popular cigarette jingle from my youth: “The pause that refreshes.” I can’t remember the name of the brand.

Dressed in my well-soiled clothes, I am led out of the small office. They are holding the airplane, waiting for their one passenger. I start in the direction of my luggage, still lined up on the custom’s counter.

“Hold on! You can’t take those bags,” the plainclothes officer warns me rather gruffly. “Your luggage has not been inspected yet, and we have no time to do it now. You must get right on the airplane; it is ready to leave. We will put your bags on a later flight. They will come tomorrow. . . .”

“But there is no later flight . . . and look at me, my clothes are filthy, I can’t get on an airplane dressed like this,” I protest. “I need to put on clean clothes.”

“’You look fine, boy,” the officer says, winking at me. “Your clothes were too clean before, too white. Now you look like you have been in Africa.” The plainclothes officer had affected a jovial, almost friendly, attitude. “But if it bothers you, see there. In the tourist shop you can buy a fancy shirt like mine. It would look good on you, and you will have a souvenir of Sierra Leone. If you don’t have any more of our money, they will take dollars.”

We reach the gate. I am still not sure I that I will be going anywhere. I hand my boarding pass to a round faced man wearing a dark blue uniform. He looks at it very seriously and then hands it back. Through the door I can hear that the only airplane on the ramp has started its engines. The ticket taker mumbles something which I cannot understand over the whine of the aircraft’s turbines. I feel an arm on my shoulder.

“Well goodbye, my friend, have a nice trip to America, maybe I will get to go there someday myself,” the plainclothes officer says, standing there with his hand extended; what else can I do but shake it.

“Goodbye,’ I say, “it’s been. . . .” The jet’s engines increase their roar, drowning out my speech, which is just as well as I am not quite sure what to say anyway. I turn and step out on to the freedom of the ramp.

It is then I become aware I am shaking violently. My body is damp with sweat. A bitter, black wind is blowing from the mountains, kicking up dust on the tarmac as I walk toward the airplane. A shiver passes down my spine. It seems unusually cold for this time of the year.

“Welcome aboard British Caledonian Airways,” the stewardess says as I slowly ascend the ramp. And then the smile slides from her face as she looks down and sees my filthy clothes.

“I was in an accident on the way to the airport, and didn’t have time to change,” I lie.

Stephen Poleskie is a writer and an artist. His writing, fiction, poetry and art criticism have appeared in journals in Australia, Czech

Republic, Germany, India, Italy, Mexico, the Philippines, and the UK, as well as in the USA, and in the anthologies The Book of Love, (W.W. Norton) and Being Human, and been three times nominated for a Pushcart Prize.  He has published seven novels. His artworks are in the collections of numerous museums, including the MoMA, and the Metropolitan Museum, in New York, and the Tate Gallery, and Victoria and Albert Museum in London. Poleskie has taught or been a visiting professor at a number of schools, including: The School of Visual Arts, NYC, the University of California/Berkeley, MIT, Rhode Island School of Design, and Cornell University, as well as a resident at the American Academy in Rome. Poleskie lives in Ithaca, N.Y., with his wife the author Jeanne Mackin. 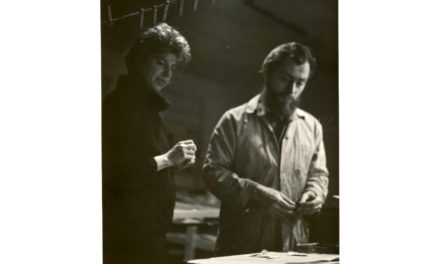 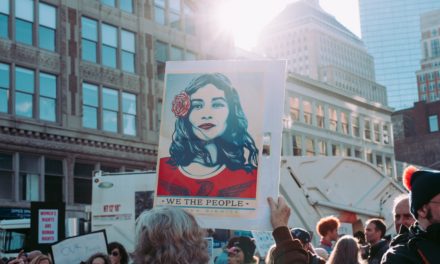