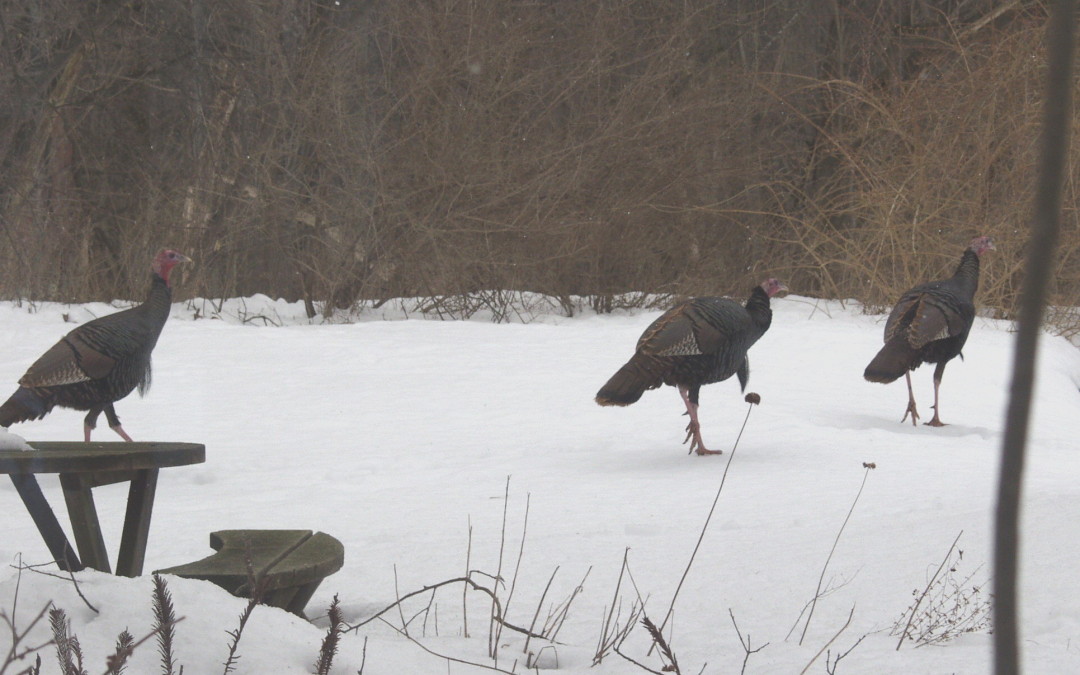 Wild turkeys parading down my driveway in the snow.

I have begun writing this on the evening before Thanksgiving Day. Outside it is snowing and has been since morning. Over much of the northeast the snow has closed down airports and stranded thousands of travelers trying to get home for the holidays. I, however, am sitting here comfortably in my house, where I have lived for the past 45 years, happy in the knowledge that the Thanksgiving dinner my wife and I have been invited to tomorrow is only a short drive away and my wife’s Subaru has snow tires. Why do I mention the 45 years? Because in the 10 years after I finished college, and before I bought this 1860s farmhouse on twenty acres, I had lived in 21 different places; from rooming houses to studio apartments, to storefronts, to lofts, to a converted garage, and on friends’ couches and floors: in Pennsylvania, Florida, the Bahamas, Mexico, California, and New York City. Now I am happy to stay where I am.

The outgoing president of Uruguay, Jose Mujica, has been quoted as saying one of the things that he enjoys about getting old is that you don’t have to go anywhere. This comes from a gentleman who not only has seen 79 years, but who spent a good portion of his rebellious youth in prison. You may not be familiar with President Mujica, as he doesn’t get much mention on the entertainment/talk shows that are passed off as news programs here in the United States at the beginning of the 21st Century. Or is it me? Am I the only one who doesn’t care who won last night’s “Dancing with the Stars” competition? I had to read The Guardian Weekly to discover that the president of Uruguay is a very interesting person, certainly a change from most of the politicians we are taught to know and love. His achievements are many; for one, he legalized marijuana in Uruguay. He moved out of the presidential palace into an old farmhouse in the country, having turned the palace over to homeless people. He gives most of his salary to charities and drives himself around in a 1987 Volkswagen Beetle. When he has to fly somewhere, which apparently is not that often, he travels economy class.

Okay, so it’s the day after Thanksgiving and I am still working on this article. Since I type with only two fingers, sometimes only one, it takes me a while. Back when I was in high school I wasn’t allowed to learn to type – what they call “keyboarding” today. The classes were divided into two groups: the academic students, who were destined for college and the general students, who were assumed to be heading for the labor force. The young ladies from the latter group were the ones who took typing, and shorthand, and a basic form of accounting called bookkeeping. Their male counterparts spent their time in classes called industrial arts, where they learned to build bird houses. We “academics” studied subjects like algebra and trigonometry, things we would find quite useful in later life. No one ever considered that we might have to type up a term paper or two in college.

While I am digressing I will mention something else I never learned in school, as the dates that just past November 26 and 27 mark the anniversary of the WW II Battle of Brisbane. On these two infamous days in 1942 American and Australian troops battled each other on that city’s streets. Australia was on our side during the war, so what were its soldiers doing fighting American troops?  Simply put, the clash was over the local “chicks.” General Douglas MacArthur had retreated from the Philippines to Australia with tens of thousands of soldiers. These American men were better dressed and higher paid than their Australian counterparts, and their PXs were stocked with chocolate bars and nylon stockings, all things that made them attractive to the women of Brisbane. The Australian soldiers didn’t like the fact that the local women were dating the Americans. And kissing them in public. One day an attempt by some MPs to arrest a drunken American soldier, who was being accompanied by his Aussie buddies, caused a brawl to break out that enveloped the town for two days. While only one person was killed, hundreds of soldiers from both sides were injured and hospitalized. At the time General MacArthur did his best to keep this conflict out of the press, which is why the battle is little known on this side of the world.

Very interesting, you say, but where is all this going? Nowhere, I answer, isn’t that what this article is about. It’s still snowing outside. I do have snow shoes and cross-country skis out in the garage, but little desire to use them. Nowadays I prefer to sit by my fireplace drinking tea and reading a magazine or book.

So what happened? Didn’t you used to fly all over in your airplane?

My piece in the last issue of this journal was about our near fatal encounter with a thunderstorm. It ends with my wife and our two friends getting back into my airplane. But that was not the end of the story. We would have one more “close encounter” before we returned to our various homes. I was reminded of it at the Thanksgiving dinner, which I did attend and it didn’t snow as predicted. Diane Ackerman was at the dinner and reminded of the ending, at least the ending for her, who we dropped off at the small airport near William and Mary College where she was the writer-in-residence.

We had flown up from North Carolina in fairly tranquil weather. Nevertheless, I had filed an instrument flight plan, as I always did, just in case we encountered any bad conditions. As we neared our destination the controller started to work us down. I could see that he would soon have us in a solid overcast, and judging by the outside air temperature the insides of these clouds would be just about right for building a layer of ice on my airplane, which I certainly did not want. Ice forming on the wings destroys the airflow. This compromises the lift. Too much ice and the airplane can go nowhere but down. I told the controller that I wanted to stay on top as long as I could. However, he had different ideas and wanted us lower.

Inside the clouds now we slipped along in another world. There was nothing to see outside the windows but the whiteness and the wing tip strobes flashing, and the ice slowly building on the wing’s leading edge. Although I had a twin engine airplane, I did not have the deicing boots and heated propellers of the larger models. I asked the controller if he knew what the cloud base was in my area. I wanted down and out of this stuff as the ice was building rapidly. Unfortunately, control had no knowledge of the bases and told me to remain at my assigned altitude.

The small airport we were heading to did not have an ILS, or instrument landing system. The man was vectoring us around for an approach off a nearby navigational facility, a non-precision approach that kept us at a higher altitude and in the clouds for a longer period of time. Now the engines were starting to run rough. I pulled out the carburetor heat knobs. We needed to be down, out of these clouds.

I knew where I was, as I had been to this airport before. Making a quick check of my sectional chart I refreshed my memory. The land was flat, and there was only one tall tower in the area, but it should not be in my route. Catching faint glimpses of the landscape below me, or was it my hopeful imagination, I contacted control and told them that I had ground contact and was cancelling my instrument flight plan and starting down. The controller seemed to be as glad to be rid of me as I was of him.

We were out of the clouds, but not exactly at the 1000 feet ceiling and three mile visibility specified for visual flying. I was engaged in what was called “scud running,” skimming along the ground at 500 feet above the surface looking for the airport. The temperature was warmer at this lower altitude and the ice was melting, although both engines were still running rough.

I saw the airport, right where it was supposed to be. As it had no control tower I reported my position on Unicom radio and announced that I was landing. As I banked left to line up with the runway the right engine quit. I glided in on one engine. As I taxied to the fixed base operator, Paul West, who had been observing from the right rear seat remarked, “I’ve never seen you cut an engine on landing before.” I made no reply.

Stephen Poleskie is a writer and an artist. His writing, fiction, nonfiction, and poetry has appeared in journals in Australia, Czech Republic, Germany, India, Italy, Mexico, the Philippines, and the UK, as well as in the USA, and in the anthologies “The Book of Love,” (W.W. Norton) and “Being Human,” and been nominated for a Pushcart Prize. He has published seven novels. His artworks are in the collections of numerous museums, including the MoMA, and the Metropolitan Museum, in New York, and the Tate Gallery, and Victoria and Albert Museum in London. Poleskie has taught or been a visiting professor at a number of schools, including: The School of Visual Arts, NYC, the University of California/Berkeley, MIT, Rhode Island School of Design, and Cornell University, and been a resident at the American Academy in Rome. Poleskie currently lives in Ithaca, NY with his wife the author Jeanne Mackin.