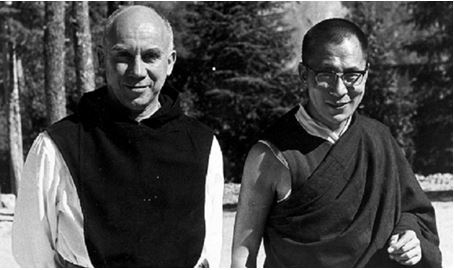 Thomas Merton and the Dalai Lama, Darhamsala, India, fall 1968. Merton’s habit and black cowl in this photo are part of the collection of Merton’s personal effects discovered by Ragazine Contributing Editor John Smelcer, stored by Merton’s friends for more than 50 years after the scholar-theologian’s death.

A Nun, a Monk, and a Priest Walk into a Monastery:

Long-time Ragazine contributing editor, John Smelcer, recently made an amazing discovery. One might just call him Indiana Jones-Smelcer. Since leaving Upstate New York in 2013, he has been living in northern Missouri. It’s a pretty lonely existence in the small town, and he laments the loss of his favorite coffee houses in Binghamton and Ithaca. But, as fate would have it, he was exactly where he needed to be when the greatest story of his life fell into his lap.

In the late spring of this year, Smelcer  “discovered” all of the worldly possessions of the late Thomas Merton, one of the most influential figures of the Twentieth Century. And he found them in Missouri. Writer, intellectual, philosopher, poet, mystic and social rights activist, Merton was the most famous monk in the world when he died in December 1968. The author of 65 books, including his iconic The Seven Story Mountain, Merton influenced the Civil Rights Movement, helping to inform Martin Luther King, Jr. how to successfully apply non-violent protest; and, he was one of the most vocal critics of Nixon’s war in Vietnam. His book, Faith and Violence, published the year of his death, is extremely critical of America’s war-mongering in Southeast Asia. Lawrence Ferlinghetti included several of Merton’s poems in a proto-Beat anthology that also included poets Allen Ginsberg, Jack Kerouac, and Dylan Thomas, among others. His writing influenced millions around the world, including Bob Dylan and The Beatles. 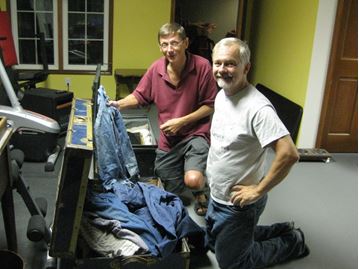 What Smelcer discovered was the most significant “treasure trove” of Mertonalia in history. While numerous archives hold letters, notes, book drafts, etc., almost nothing personal of Merton’s was known to exist.  Merton was, after all, a Trappist monk, and therefore poor of earthly possessions by choice. The trove included all the clothing Merton is wearing in photographs from the last years of his life: photos of him in his white monk’s habit and black hooded cowl; photos of him in his iconic denim jacket, jeans, and sailor cap. Everything. The collection included such sacred objects as his rosary and his personal Psalter (Latin hymn book for Gregorian chant). It also included notes, photos, letters, and audiotapes of him talking.

The objects had been protected by close friends of Merton’s — a fellow brother monk and a nun. After Merton’s death, the monk and the nun left their respective religious orders and married. They moved to Louisville, Kentucky, for a few years, and eventually to Kansas City. For almost half a century they safeguarded their friend’s belongings. The former monk died in 2009. In her mid-eighties, the former nun, named Helen Marie, worried about what would happen to the collection when she passed.

A meeting was arranged, and Smelcer was given the entire collection with the instruction to dispose of the materials to relevant institutions, such as the Thomas Merton Center in Louisville, where Merton himself wanted his archives to be collected. Dr. Paul Pearson, Director of the Center, was elated on hearing about, and ultimately receiving, much of the collection. 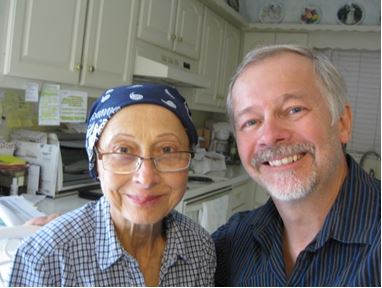 Smelcer spent the summer and early fall of 2015 contacting institutions and traveling to meet their staff members. He has communicated with Pope Francis about donating an object to the Vatican collections. The bulk of the Merton materiel has now been donated to various recipients with the ability to preserve and protect it, and the Frasier Museum in Louisville will exhibit some of the artifacts in late January. The former nun, despite health issues, looks forward to attending the opening of the exhibit. In his address to the United States Congress in September, Pope Francis named Merton one of the greatest Americans, alongside Martin Luther King Jr., Dorothy Day, and Abraham Lincoln.

In the past month, Smelcer has presented his first public lecture about the discovery, and he, Helen Marie, and Pearson have been interviewed on NPR: http://kbia.org/post/thomas-mertons-personal-belongings-resurface-missouri-nearly-fifty-years-after-his-death

Smelcer continues to meet with Helen Marie regularly, interviewing her further about her friendship with “the most famous monk in the world”, and is writing a book about the man and the discovery.

Ragazine contributing editor John Smelcer is the author of over 50 books. His writing appears in over 500 magazines worldwide. Learn more in About Us, and at www.johnsmelcer.com